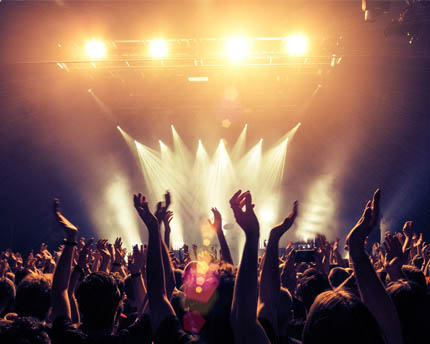 With the arrival of warm weather, Granada is filled with music, parties and a great atmosphere. Music festivals mark the start of spring and remind us that summer holidays are around the corner.

Granada has many live music performances in every shape and colour. Although there is an ever-present music scene, new alternatives are constantly popping up.

Granada’s festival calendar runs from May to September, so if you plan on visiting the city during the summer months, here are some ideas.

Granada Sound takes place in late September and this year’s line-up includes artists such as Crystal Fighters, Dorian, Carlos Sadness, Sidecars and Nancys Rubias. Since Granada is a cradle of indie music, its biggest festival also features many local artists like Niños Mutantes and Andalusian performers such as El Kanka and Juanito Makandé.

Due to the large crowds, the festival is located on the city outskirts, near Parque Empresarial Norte. Independent music has managed to carve an important niche throughout Spain, and Granada Sound welcomes top performers.

The festival organisers arrange shuttle buses to and from the venue, and bus tickets can be purchased directly from the event’s official website, with unlimited rides between 2:00 PM and 6:00 AM. There are two lines: the yellow one stops at Neptuno Shopping Mall and in Villarejo, and the blue line stops at the Palacio de Congresos conference centre and Triunfo.

The Bull Music Festival begins in late May and fills Granada with rap and alternative music during a two-day period. This year’s line-up included Kase.O, Natos y Waor, La Raíz, Izal and even Rosendo.

The venue where the festival takes place is near the one for Granada Sound, so there is also a shuttle bus service for convenient access. The bus stops are at Triunfo and Villarejo, there are unlimited rides during the festival and the last bus leaves at 6:30 AM.

As we shift gears completely, we turn our focus to the Granada Music and Dance Festival. The event is held in the heart of the city, at the Alhambra, and its aim is to convey the legacy of Andalusia’s traditions.

There have been 67 editions so far and the festival takes place over the course of one week in June. Activities include photography workshops, classical music concerts, classical and contemporary dance performances, transhumance, ballet, theatre and more. In summary, culture and art come together for audiences to enjoy.

Tickets are sold separately for each performance, although many are free.

Additional options are available in the city. Jazz enthusiasts may be interested in the Festival de Jazz en el Lago, held during the first weekend of July in the stunning park by the Ermita de los Tres Juanes shrine in the town of Atarfe. There have already been 17 editions and the number of followers grows every year.

During two evenings, the festival brings together jazz artists from the national and international music scene, with performances by Kenny Garrett Quintel and Sergio Pamies Quartet, for example. Tickets cost €10.

Since it couldn’t be any other way, Granada also has its own flamenco festival: Festival Flamenco Homenaje al Tío Miguel. The two-day event features singing, music and dancing centred around this art. Miguel Montes Neiro loved flamenco. He lived in the Albaicín quarter and spent his life conveying the importance of music ‘done well’. The festival commemorates ‘Uncle Miguel’s’ efforts to spread the flamenco culture.

For a refreshing alternative, try the Rosco Festival in Loja, which features a pool party at the local pool along with indie and electronic music. It takes place in June at the Medina Lauxa Municipal Stadium and tickets cost €15.

There is no denying that Granada has festivals for all types of audiences and budgets. Summer in Granada is filled with music and good vibes to be enjoyed with loved ones.