The Almudaina Royal Palace is one of those monuments which appears regularly on Spanish television since the Spanish Royal Family holds its receptions there during the summer months, although its summer residence on the island, Marivent Palace, is around 8 kilometres from there. In any case, Almudaina Palace is one of the city’s most iconic buildings and creates, together with the cathedral (internal link), a beautiful Gothic postcard overlooking the bay. You could not choose a better image to welcome visitors to the city’s historic centre.

Almudaina Palace, adaptation after the conquest of Majorca

Some historians state that the architectural site on which the current palace is built may date back to the pre-Romans who lived on the island and even to the Megalithic period. Nevertheless, it was during the Arab domination of Majorca when the casbah was established and called Almudaina, which means ‘citadel’ or ‘fortress’.

It was then adapted and reconverted into the seat of the Kingdom of Majorca and, as such, James II, Sancho I and James III of Majorca resided there. During that transformation, in addition to constructing a Christian chapel (symbolising the island’s new spiritual ‘domination’), the building adopted the Mediterranean Gothic style. Nonetheless, some Arab motifs remained, as can be seen, for example, on the ceiling corresponding to the casbah’s former walkway which is made of black and white wood.

Almudaina Palace as a monumental ensemble

Pay attention to the following points of interest when visiting the Almudaina Palace:

As you can see, the Almudaina Royal Palace is one of the buildings which best shows the legacy left by the various civilisations who lived on the island.

How to get to Almudaina Palace (in Palma) 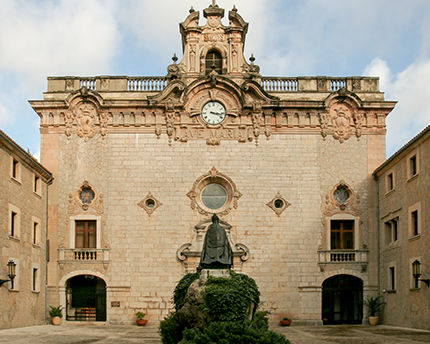