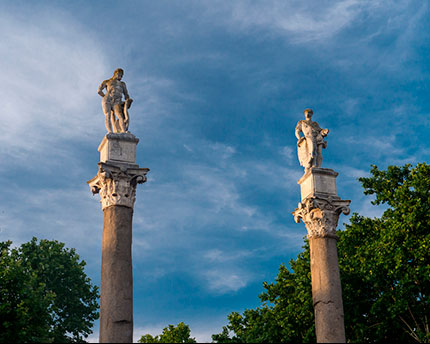 For decades, the Alameda de Hércules has been the home of some of Seville’s most interesting social movements. This neighbourhood has become the epicentre for new trends, fashions and cultural expressions, which in turn lead to social customs changing all over the city. All that hasn’t just transformed the neighbourhood’s atmosphere, but it’s had a big impact on the impression that people get of Seville, as being an open-minded city that embraces diversity.

Much of that is thanks to the LGBTI+ community. Venues catering to this community have opened up and many of those who belong to it have moved into the area, driving this change of image. But if you consider that just a few years ago it was one of Seville’s most run-down neighbourhoods it’s surprising that, these days, it’s so fashionable.

In stark contrast to what it used to be like, today house prices in the area are rising, and every important chain in Seville has either opened, or wants to have, a restaurant or tapas bar here. What’s more, the Alameda de Hércules itself is—thanks to its size (480 metres by 80 metres) and the fact that it’s all pedestrianised—the perfect spot for holding markets, concerts, open-air exhibitions and popular festivals.

The origins of the Alameda

What today is the Alameda de Hércules was once the bed of the Guadalquivir river, which, back then, didn’t meander around the edge of the city’s historic centre, but flowed straight through it. According to an insufficiently documented legend, it was the Visigoth King Leovigildo who changed the course of the river to punish his son Hermenegildo and his followers, who had converted to Christianity, depriving them of the river water.

In fact, this land beyond the city walls became a stagnant lake which, with the frequent floods, would constantly be refilled by the river water, turning it into a quagmire.

That was the situation until the sixteenth century, when the Count of Barajas decided to drain the land using canals. That created a large flat space, which ended up becoming what historians consider to be Spain and Europe’s oldest public park (1574).

Despite best efforts being made, the Alameda was always being flooded as it was low-lying. Even so, 1,600 poplars were planted here in 1764. And, the number of fountains was increased to six.

Why is it called the Alameda de Hércules?

When the area was being made into a public park, two columns originating from a Roman temple from the nearby archaeological site of Itálica were placed at its southern end. On the top of those columns, which stood in a building on Calle Mármoles, two allegorical sculptures of Julius Caesar and the god Hercules, created by Diego de Pesquera, were placed. Centuries later, at the other end of the gardens, two other columns were placed and topped with sculptures—in this case, of lions that support the coat of arms of Seville and Spain.

If we add to that the fact that the majority of the trees in this park are the poplars (álamos in Spanish) that have survived since the mass plantation in the eighteenth century, it’s easy to understand where the name comes from.

These days, the Alameda is no longer mostly covered with the sandy earth (known as albero) that was one of its main identifying traits, as it’s been almost completely paved over. This has been done in recent years and one of the most notable features are the fountains that spring from the ground, integrated into the paving itself. Many of those who visit the Alameda use them to cool off on the days that the summer heat is at its height.

Bars and restaurants for everyone

The Alameda de Hércules is the perfect area for a tapas crawl, thanks to the huge number of bars in the area which, in recent years, have turned the neighbourhood into a mini culinary Mecca. One of the most popular spots is Las Columnas (Alameda de Hércules, 19), where your best bet is to order a montadito sandwich: the pringá  one—made with stew meat (roast beef or pork, chorizo, blood pudding and fat)—is legendary.

One of the most innovative options is Arte y Sabor (Alameda de Hércules, 85), characterised by its Mediterranean-inspired modern tapas, and its vegetarian selection. Dúo Tapas (Calatrava, 10) offers a modern tapas menu in a colourful, bright setting. During the warmer months of the year, Carayaca (Alameda de Hércules, 43) has one of the liveliest, most pleasant terraces, although it’s nothing to write home about on the gastronomical front.

As we’ve already mentioned, one of the main things that have transformed the Alameda de Hércules into one of Seville’s trendiest neighbourhoods is the plethora of bars and restaurants aimed at the LGBTI+ community, many members of which have made the area their home. These days, this neighbourhood is one of the most open-minded in the whole of Southern Europe.

There are a lot to choose from, but Ítaca (Amor de Dios, 31) is one of the longest-running, popular spots, attracting a diverse crowd, with people of all ages.

Another classic place in Alameda de Hércules is El Bosque Animado (Arias Montano, 5), a café with a terrace where people come for a drink or a snack as afternoon turns to evening.

At the very popular bar Men to Men (corner of Trajano and Delgado, 1) they play really danceable tunes, and put shows on at the weekends. And for anyone who’s feeling really nostalgic, 1987 Bar (Alameda de Hércules, 93) specialises in music from the eighties, with decoration to match.