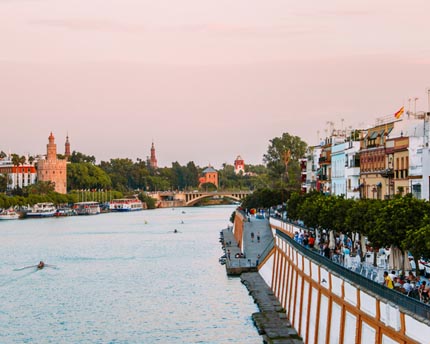 To mention Calle Betis is to mention Triana, because the street is not just the most famous and most loved in the district, it is also the great, colourful backdrop to one of the most authentic and popular areas in Seville. By way of the Guadalquivir river, the façades of its houses face onto some of the most important monuments in Seville’s historic quarter (Torre del Oro, Plaza de Toros, the Teatro de la Maestranza, the Cathedral , the Giralda and, further along, the towers of Plaza de España). It offers a magnificent panorama that can be enjoyed, glass of wine or beer in hand, from one of the many bars and restaurants which the street is famous for.

Calle Betis runs parallel to the course of the Guadalquivir river, opposite the city’s historic quarter. It takes its name from the river, which was named as such by the Romans, and connects Plaza de Cuba with Plaza del Altozano. Both are important spaces in the life of the neighbourhood, as they link it to the rest of the city, via San Telmo bridge and Isabel II bridge, commonly known as Triana bridge.

A tall wall (belonging to a factory) raises the street above the river, protecting it from possible flooding, which was a common occurrence in the past although that’s not the case today. The buildings that line the street have no sense of uniformity, although there is an abundance of narrow houses with, at the most, five floors. Each building is painted a different colour forming a cheerful collage that is one of the city’s hallmarks.

Most of the ground floors of these houses are occupied by commercial spaces, mainly bars and restaurants. Many of them also have outdoor seating next to the river, which, when the weather is good, becomes the best place to look out onto the rest of the city, above all on those magical golden afternoons that Seville so often bestows upon its residents and visitors.

Tapas  is king in the bars and restaurants along Calle Betis and you can also find traditional Seville food. That said, over recent years some establishments have begun to innovate, either in terms of their interior design or the type of dishes they serve their customers. 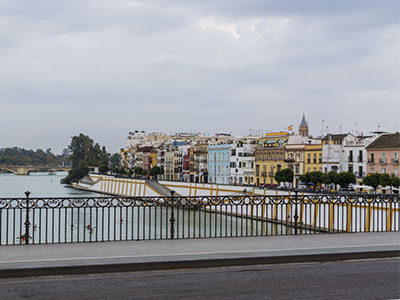 Among the former, the more traditional is La Primera del Puente (Betis, 69C), which has been on the street since before the Spanish Civil War and whose terrace boasts undoubtedly one of the best views of the Tower of Gold. There are no surprises on the menu, just bags of authenticity: above all, fish and seafood prepared according to a diverse range of Andalusian regional variations. Along the same lines is the restaurant Río Grande, one of the largest on Calle Betis—its dining room can seat up to 750 people. The food on offer revolves around its ingredients, with a particular focus on rice, white prawns of Huelva and cured meat and Iberian ham.

The restaurant El Mero (Plaza de El Altozano, 1), for its part, is a great option for those looking to enjoy the most authentic fried fish, although they also serve classic Andalusian stews and rice dishes.

For the modern diner

One of the symbols of modernity of Calle Betis is Abades Triana (Betis, 69), the flagship restaurant of a group that has several other restaurants in Seville and the rest of Andalusia. Its head chef, Elías del Toro, offers dishes inspired by the Mediterranean, presented in a colourful and striking way. What’s more, the views from his stylish dining room really have the wow factor.

Based on Andalusian culinary tradition, the restaurant María Trifulca (Puente de Triana, corner with Plaza del Altozano) offers an industrial décor but with a very modern ambience. It occupies a building traditionally known as the Faro de Triana.

Calle Betis also offers restaurants serving international cuisine. One of the most popular is Don Cammillo e Peppone (Betis, 33), where Italian pizzas are the order of the day, but with some nods to the new spirit running through the kitchens of Seville. Their special pasta dishes, for example, have some surprise fillings. 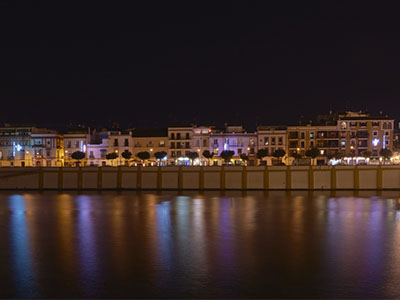 The bar tradition on this bank of the Guadalquivir river goes back a long way. Specifically to the time when Seville was formed of two different municipalities separated by the river. On one side, the strictly Muslim Isbiliya and, on the other side, Madinat al Taryana, where Christian taverns were established. Legends from the time tell of how the work of boatmen, who facilitated communication between the two localities, doubled come nightfall. And it’s not hard to imagine why.

Another interesting fact about Calle Betis is that its current design originates from the mid-nineteenth century when it was “lifted” from the banks of the river thanks to the construction of the aforementioned factory foundation (a retaining wall). Thus, it withstood the dangers of frequent flooding and, in turn, improved sanitation. However, the wall in front of the river also turned the street into the best viewpoint for contemplating the city’s most scenic area.

Finally, the most striking building on present-day Calle Betis is, without a doubt, the so-called Casa de las Columnas, dating from the eighteenth century, with a lovely Baroque-style façade. The large mansion stands on what was once occupied—in the sixteenth and seventeenth centuries—by the Universidad de Mareantes. That is, a university for the sailors who would later embark on expeditions to the Americas, which departed from the port of Seville itself. 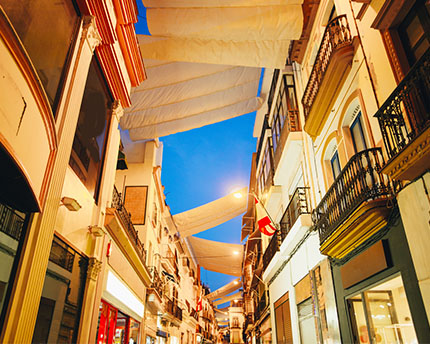