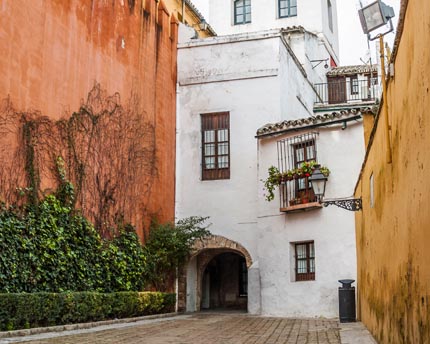 Whilst the cathedral and the Giralda tower attract a large part of the tourists who come to Seville, just a few metres away is the Santa Cruz neighbourhood, the city’s former Jewish quarter and one of the most beautiful places in the Andalusian capital.

Despite its small size, it’s easy to lose your way through its meandering alleyways if not using a map or smartphone to guide your way. But don’t worry, just like in other famous areas, such as Rome’s Trastevere or Lisbon’s Alfama, the best way to explore the Santa Cruz neighbourhood is by following your instinct and wandering aimlessly through its narrow streets—which occasionally open out onto small plazas—marvelling at the traditional tiles of its churches, peeking through the iron bars to admire, with certain envy, private courtyards adorned with colourful geraniums and the scent of jasmine and orange blossom.

All this and more is the Santa Cruz neighbourhood, the perfect place to wander alone or with company. What’s more, its narrow streets mean you’ll find some much-appreciated shade considering the temperatures that can be reached in Seville during the summer.

The history of Santa Cruz

What we know today as the Santa Cruz neighbourhood was once nothing more than the periphery of the old city of Híspalis in Roman times. In fact, on Calle Mármoles, just a short distance away from the outskirts of the neighbourhood, there are still vestiges from the era: the three columns of a Roman temple dating from the third century AD.

Similarly, during the period of Almohad dominance, the neighbourhood didn’t exist as such, and the area, a plain situated between the two gateways of Puerta de la Carne and Puerta de Jerez, was instead known as Alcázar de la Bendición. It was from 1248, the year in which the forces of King Ferdinand III conquered Seville, when the Jewish community began to settle there, receiving permission for the three former mosques to be used as synagogues whilst the rest were converted into churches. Thus, Seville became the home of the second largest Jewish community on the Iberian Peninsula after that of Toledo.

However, the widespread practice of usury among Hebrew traders created feuds with their Christian neighbours, who in 1391 led a significant attack that put an end to Jewish control of the neighbourhood. From then on, many Jewish homes became the property of Christians, in addition to the three aforementioned synagogues, which were to become the churches of Santa Cruz, Santa María la Blanca and San Bartolomé. Thus, in a short period of time, the function of these buildings changed twice, from mosques to synagogues, and from synagogues to Christian churches. Another example of how, throughout history, sacred spaces have enjoyed special significance and have been reused by diverse religions.

Several years before the Ibero-American Exposition of 1929, the continuity of the Santa Cruz neighbourhood as we know it today was gravely threatened when the possibility of building two large roads was tabled. If the plans had gone ahead, the area’s historical layout would have been completely transformed. Fortunately, the Marquess of Vega-Inclán made a stance and prevented the dramatic intervention from taking place.

Callejón del Agua: the most romantic passageway in Seville

The Santa Cruz neighbourhood is home to hidden buildings of great historical importance, such as the Hospital de los Venerables, and stunning urban features, such as the secluded Plaza de Santa Cruz, where the place of worship that gave its name to the neighbourhood stood until it was demolished in 1811 during the French invasion. However, if we had to choose one place in this unique neighbourhood, it would most likely be the Callejón del Agua, also known as Calle del Agua (its official name) or Muro del Agua.

Situated between Plaza de Alfaro and Calle Vida, all 140 metres of the passageway are a genuine sensory journey running alongside the wall of the Royal Alcázar, in the shadow of its towers and battlements, and, on the other side, private houses, some of which boast courtyards with a veritable explosion of greenery. This is certainly the case at number 2, where a plaque made by the famous Valencian sculptor Mariano Benlliure recalls how the romantic traveller Washington Irving, author of Tales of the Alhambra and a self-confessed admirer of Andalusia, once lived there.

Patio de las Banderas: where to get the best photograph of the Giralda

Calle Judería begins where Callejón del Agua ends and, by means of a small tunnel, we come to Patio de las Banderas, the pleasant square where tours of the Royal Alcázar end and where you can enjoy one of the loveliest views of the Giralda. To do so, just cross the square and head towards the archway in the north-western corner. You’ll see how its semi-circular arch perfectly frames both the slender minaret of the former mosque and the Renaissance apse of the Royal Chapel, one of the later additions to the Gothic masonry.

On the other side of the archway is Plaza del Triunfo, which also leads onto Plaza de la Virgen de los Reyes. At this point, and after having explored the streets of the always astonishing Santa Cruz neighbourhood, the best thing to do is wrap things up with a snack at one of the bars that line Calle Mateos Gago. Along just a few metres are a high concentration of places to eat, but beware, it’s no mean feat trying to find a table or space at the bar where you can indulge in a serranito sandwich and a nice cold glass of beer. 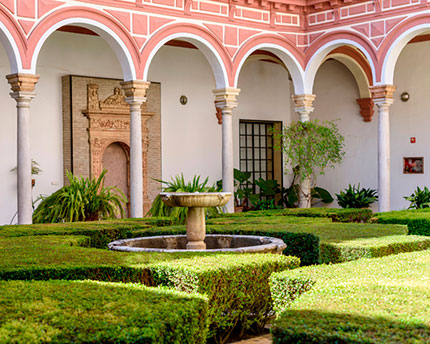