Prague’s history cannot be understood without Wenceslas Square (Svatováclavské náměstí, in Czech). This large space situated in Nové Město (New Town) has been the scene of many events and demonstrations of great importance for the Czech Republic. Today it is one of the main squares in Prague and an essential place to visit when in the capital of Bohemia.

Wenceslas Square is situated to the southeast of the Old Town (Staré Město). Although it is considered part of the New Town, the square belongs to the part of the city declared a UNESCO World Heritage Site and is actually situated on the boundary between both districts.

Centuries before, the square was known as the Horse Market (Koňský trh), where said animals were traded from as early as the fourteenth century. In 1848, however, it was renamed as Wenceslas Square.

Wenceslas refers to St Wenceslas I of Bohemia, patron saint of the Czech Republic and King of Bohemia, the former kingdom of Central Europe, which occupied what is today Slovakia and the Czech Republic itself. Wenceslas I ruled between 921 and 935, and died when he was just 28 (approximately). His body was buried in Prague’s St Vitus Cathedral, whose construction he instigated.

What to see on Wenceslas Square: statues, museums, monuments…

The first thing you notice about Wenceslas Square is its rectangular shape, which resembles a boulevard more than a typical plaza. Spanning a length of 750 metres and a surface area of 45,000 square metres, it is a perfect place for mass gatherings and all manner of events. 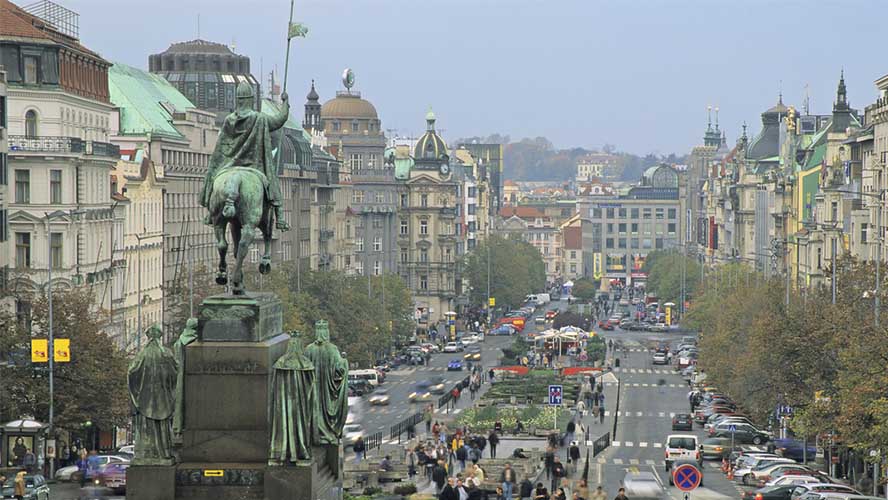 The Wenceslas statue presides over the square

However, the square is not only known as a meeting point in the centre of Prague. It is also home to various buildings and places of interest. 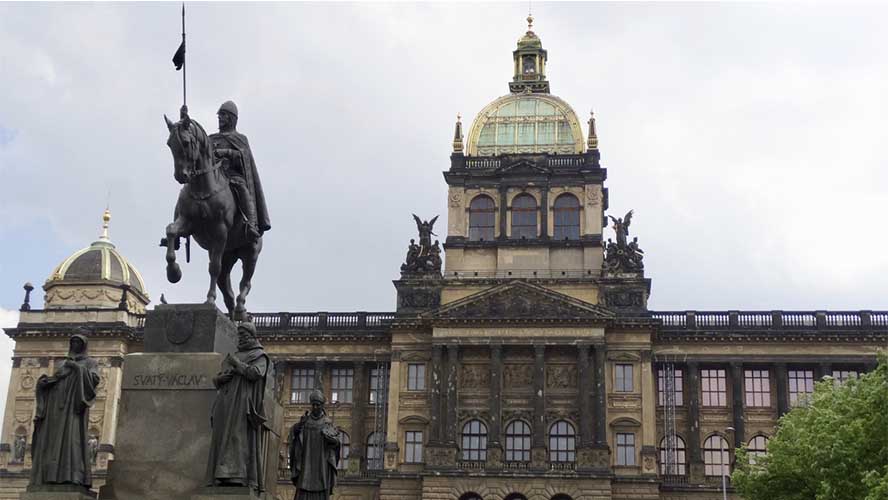 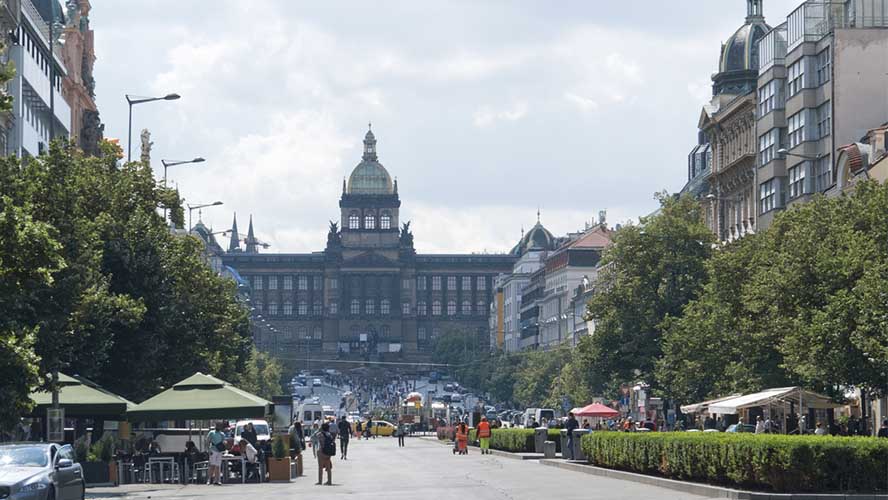 Wenceslas Square is one of the busiest areas of Prague

Wenceslas Square is an important place for Czech people, since it has been the scene of several events that are key to the country’s modern history.

Declaration of independence of Czechoslovakia in 1918

Next to the Statue of St Wenceslas, the historian Alois Jirásek read out the Czechoslovak Declaration of Independence on 28 October, 1918, at a time when the First World War was coming to an end, the Austro-Hungarian Empire—which the Czech territory was part of from 1526—was collapsing, and the right of self-determination of the nations that belonged to it was recognised.

Wenceslas Square played host to the crowds that came to proclaim their land independent after almost four centuries signalling the emergence of a new state.

The joy of independence, however, was to only last 20 years. In 1938, the Munich Conference agreed the German annexation of the Czech region of Sudetenland without negotiating with Czechoslovakia. The annexation paved the way for Hitler to apply pressure and eventually obtain control and occupy a country that was strategic for Nazi interests. In turn, the Protectorate of Bohemia and Moravia was formalised, right on the square.

Wenceslas Square thus became the epicentre of great Nazi marches in Prague. However, everything would come to a head during the final days of the Second World War when the Prague uprising erupted. During the revolt various buildings on the square would be destroyed.

The end of the Prague Spring

In August 1968, 200,000 soldiers, 2,300 tanks and 700 aircrafts from the Soviet Union and other members of the Warsaw Pact crossed the border and invaded Czechoslovakia, putting an end to the Prague Spring. Soviet tanks thus entered Prague and soldiers began to parade through the streets of the capital. And, once again, Wenceslas Square was the epicentre of the events. Images of Soviet tanks with the National Museum in the background would go down in history, much like those of young people burning Russian newspapers in protest, also on Wenceslas Square.

The Czech Republic exists today thanks to the Velvet Revolution, a non-violent uprising that put an end to communist Czechoslovakia in November 1989. People went out onto the streets en masse—more than half a million to be more specific—to express their discontent after the violence employed by police to suppress a student demonstration. Intellectuals and the people at large joined the young people and, as a result, the Soviet Bloc lost another piece from its puzzle, leading to a free election in 1990, the dissolution of Czechoslovakia and the emergence of two new states in 1993: the Czech Republic and Slovakia.

Wenceslas Square was the scene of the demonstration that kick started the Velvet Revolution. Václav Havel, an opposition leader imprisoned by the Communists, became a national hero after spearheading the movement on the square. Havel would later become the president of liberated Czechoslovakia (1989–1992) and the new Czech Republic, between 1993 and 2003. In the wake of his death in 2011 a popular memorial was installed in his name at the foot of the Statue of St Wenceslas.

It’s clear to see that Wenceslas Square in Prague is a highly important place for the Czech Republic and a key site for grasping the tumultuous contemporary history of the land, which has been subject to great instability, empires and totalitarian regimes. 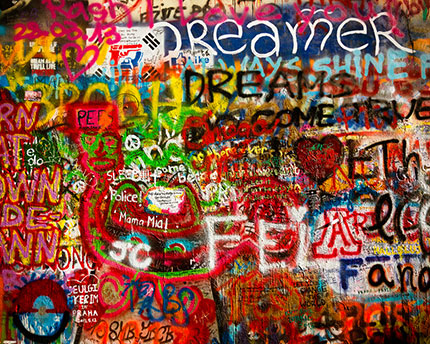 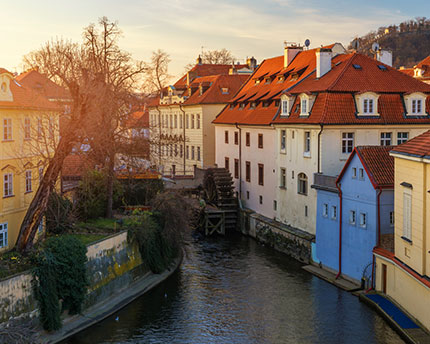