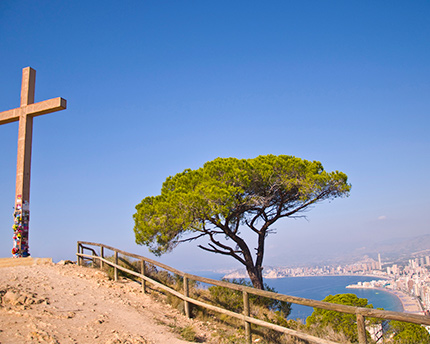 Since 1962, the Benidorm Cross has been scowling at the city’s bathers. Many people come to this summit of the Sierra Helada (or Serra Gelada, in Valencian) to enjoy the best view of Benidorm and the surrounding mountains. But, except for the locals, few remember that it was put in place to protest against the authorisation from Franco’s government to wear bikinis, and other sinful swimwear, on its beaches.

At first, the bishop of Orihuela-Alicante had threatened the mayor with placing a sign at the entrance of the town with the welcome message: “El Infierno” (“Hell”). Fortunately, a less risky solution was chosen with tourism in mind. A procession was organised in which a large part of the municipality took part, carrying the Benidorm Cross on their shoulders to the top of the mountain.

Today, that same Benidorm Cross, which is lit up at night, has been used in film thanks to its photogenic nature and is a unique spectacle for those who climb up this mountain. In short, it is a real tourist attraction because of its impressive views and its natural surroundings, a different way to relax in the city of skyscrapers that is Benidorm.

As well as a viewpoint and a spectacular walk, the Benidorm Cross is the gateway to the Sierra Helada/Serra Gelada Natural Park. There are also other routes, some of which are rewarding, such as the romantic Albir lighthouse, which stands alone on a cliff facing the sea and has breathtaking views.

The spectacular viewpoint of the Benidorm Cross

The Sierra Helada Natural Park, which covers the coast from Benidorm to Alfaz del Pi, is an area of very rugged terrain, with impressive cliffs cut into the stone leaning over the sea. Very often, its surrounding area gives us surprises, such as lush vegetation waiting for us in some of its corners. At the southern end of the park we find the Benidorm Cross, marking its end.

The surrounding mountain range has cliffs with drops of up to 434 metres, but it is a mountain with sparse vegetation, due to, among other things, the effect of the east wind. That is why you will find a clear view all the way, with bushes and some trees such as pine trees. The whole climb could be considered, therefore, a long viewpoint. There are also some official ones that are already marked, so that we do not miss any details of the experience. 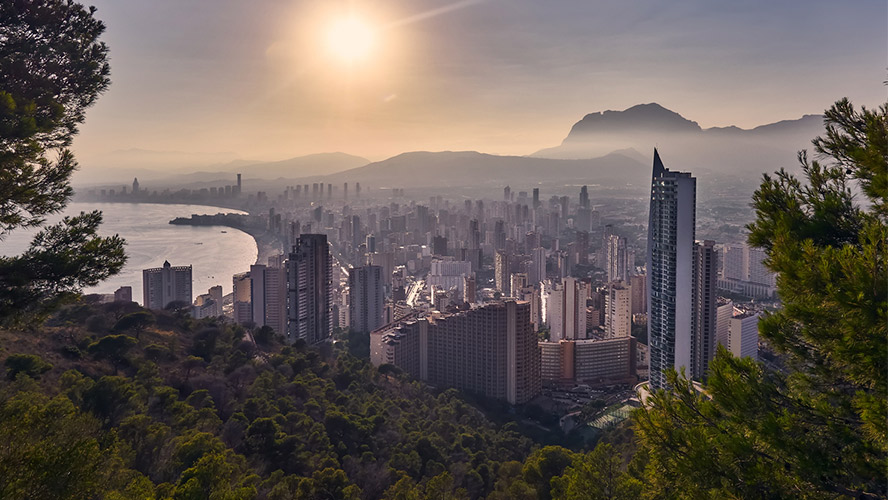 A privileged viewpoint without any doubt

At nightfall, from the peak where the cross is located, Benidorm swaps the brightness of its tall skyscrapers for semi-darkness, with the amber sky reflecting in the waters of the coast. During the day here, you will be surrounded by the eternal blue of the Mediterranean sea and sky, with the profile of the mountains that surround the city outlined on the horizon.

How to climb to the Benidorm Cross?

The route that takes us to the Benidorm Cross goes up the highest part of the crests that form the mountain range. If we so wish we can do the tour by car and park a few metres from it, but we suggest walking to enjoy the surrounding views. It is an ideal route to do by bike and very easy to do even with trainers. In addition, once a year “La Subida a la Cruz” is organised, a 10 km race to the top.

During this route, which starts from the promenade and is well signposted, you’ll pass several coves on your right such as Lusera or Ti Ximo. After leaving the urbanised part, the paved road leads us directly to the Benidorm Cross, always surrounded by the impressive landscapes that the mountain provides as you move on up.

An antidote to Bikinis

As we alluded to, at the end of 1961 passions were running high in the most religious part of Benidorm. Spain was beginning to open up to the outside world, the country’s autarky or self-sufficiency having failed, having been the last bastion of Christianity in Europe. And to show the rest of the world that the city was not infected by the prevailing trends, a week was organised with several religious acts. This was the “Great Mission” of Father Salvador Perona, carried out by himself together with other missionaries and religious people. 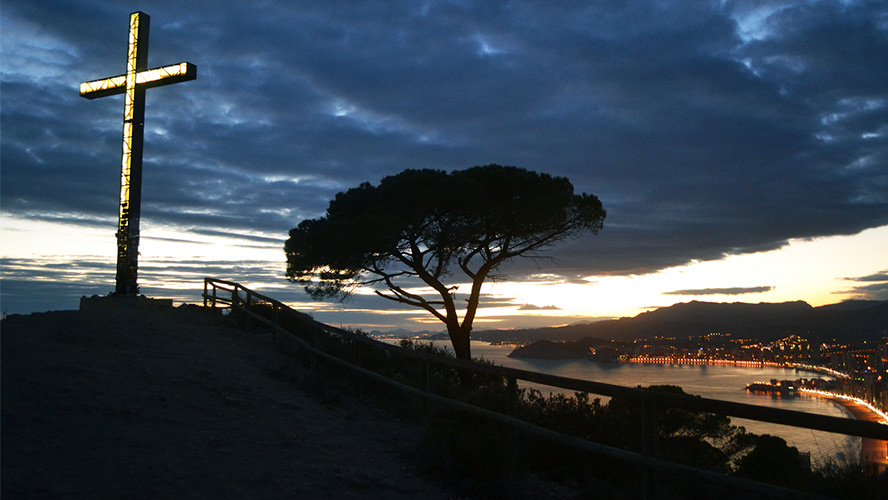 To round off the week, on the last day, the “Day of Atonement”, the organisers intended to carry a wooden cross up to the Sierra Helada. And this was widely accepted: all the children dressed up, the adults went in procession taking turns with the wood to reach the top and, in the end, the Benidorm Cross was installed at the top. In a place from which heretical holidaymakers had no choice but to see it… as long as they looked up to the sky.

This first cross was the result of circumstances and was made with two lampposts, made of wood. In 1975, a strong storm blew it away, so it had to be replaced. This time, the same practical approach was adopted and the cross was made from railway sleepers. With the advent of democracy its removal was considered, but the idea did not come to pass. Finally, the Benidorm Cross stayed there, to continue controlling everything from a height.

At Punta de L’Escaleta and very close to the Benidorm Cross we have, on the seashore and on the cliffs, the Serra Gelada/Sierra Helada viewpoint and Vigía tower, also called Punta del Cavall or Seguró, from the 14th century. In addition, from the same cross there is another route that runs through the entire mountain range on its crests, in a journey of just over 8 kilometres (one way), and that takes us to El Albir in about 4 or 5 hours.

Likewise, from the Benidorm Cross we will find the signposted route to the quaint Albir lighthouse. About 6 kilometres (about 4 or 5 hours), it will take us through different peaks of the mountain range, including the Alt del Governador, 438 metres high. Once you pass through the old ochre mines, from which this material used to be extracted to be used as a dye, you’ll have reached the Albir lighthouse. It paints a lonely picture in front of the sea, on the coast’s rocky and sharp cliffs, which still seems to belong to a fantasy of European Romanticism.

How to get to the Benidorm Cross: 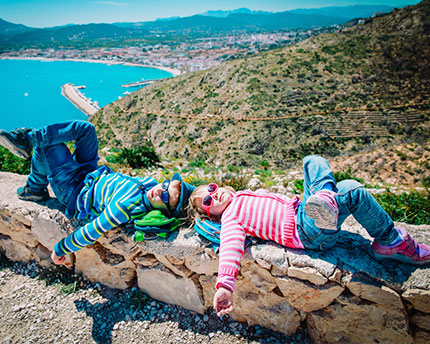 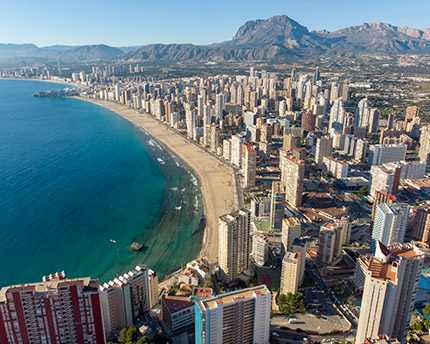 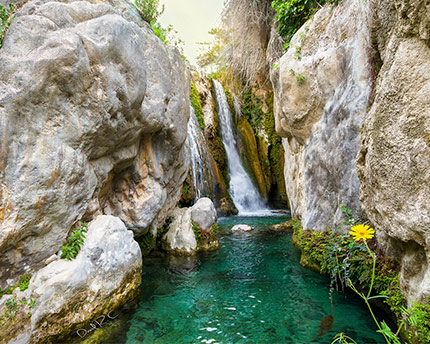