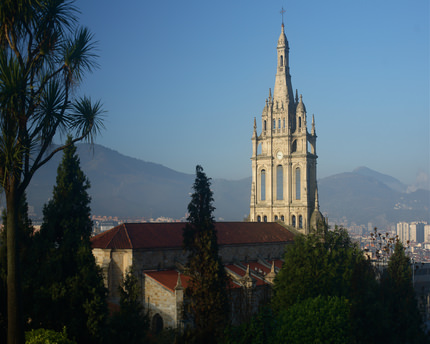 The legend goes that, some time between the thirteenth and fourteenth centuries, a shepherd stumbled across a wooden statue of the Virgin Mary on Mount Artagan. It appeared on a holm oak tree as if it had sprouted out of the earth. As such, local people wanted to find a suitable place to build a church to venerate the miraculous image. However, according to the legend, when they tried to move it, the carving took root in the soil and a mysterious voice exclaimed “Bego oina!” or “Be still!”. Thus, the church had to be built right there, and the image, ever since known as Begoña, became the patron saint of Biscay and amatxu (meaning mother in Basque) to the people of Biscay. On this exact point today stands the Gothic Basilica of Our Lady of Begoña—built in the early sixteenth century on the site of the old wooden church—which has loomed over the city of Bilbao and the Nervión river for centuries.

The Basilica of Our Lady of Begoña is the heart of the district of Begoña, situated in the upper part of Bilbao, and is the pride and joy of the people of Biscay, who come here on 11 October every year on pilgrimage to see the virgin on the Day of Amatxu. On the Assumption of Mary, on 14 August, thousands of pilgrims, who walk to Begoña throughout the night from different points in Biscay, attend morning masses in honour of the patron saint.

Altar in the basilica of Begoña

This intimate relationship between the people of Biscay and the virgin even explains the origins of the basilica, which was paid for by the hand-outs of the people of Bilbao in the sixteenth century. Hence why the pillars in the main nave are not crowned by the coats of arms of distinguished families, but instead by the emblems of the merchant guilds that contributed to its construction. Its Gothic style, designed by Sancho Martínez de Asego, diverges on the building’s magnificent façade, which instead exhibits a triumphal arch built in the Mannerist style in the mid sixteenth century. The works lasted an entire century and, as a result, the multi-coloured wood carving of the virgin was not able to take pride of place in the new church until 1603.

The people of Bilbao have always had a special relationship with Our Lady of Begoña, who they consider their guardian. Legend has it that when a catastrophe devastated the city, people would take the virgin out on procession through the streets and the floods and epidemics would subside. Seafarers returning from sea would anxiously await the bend in the river, where they would catch first sight of the bell tower of the basilica. This point is now occupied by the La Salve bridge and plaza, which owe their name to the salves, or prayers, that the fishermen made to the patron saint in thanks for having protected them on their voyage. Even now, the Athletic de Bilbao football club leave the virgin a floral offering every year, just before the start of the new season, to ask for good luck.

From Napoleon to the Carlist Wars: the basilica that became a fortress

In the nineteenth century, the basilica was put to more military than religious use due to the various sieges that Bilbao suffered causing grave damage to the building and the collapse of the bell tower, which was to occur twice. 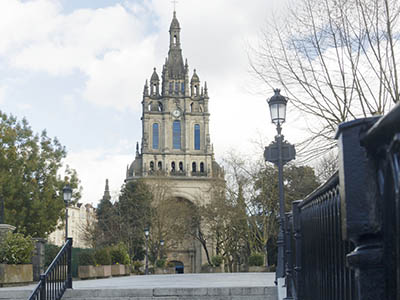 During Napoleon’s invasion of Spain in August 1808, French troops looted the basilica, killing the parish priest and causing heavy damage. The bell tower, by contrast, would resist until the First Carlist War. In 1835, after having been besieged throughout the summer, the liberal troops took advantage of the retreat of the Carlists to blow up the bell tower so that enemy artillery would not be able to use it again. On 15 June of the same year, the famous general Zumalacárregui was hit by a stray bullet that would end up killing him nine days later, turning the church into a place of pilgrimage for Carlists. In 1836, the liberals withstood a new attack from the Carlists, sadly burning the cabinets, floorboards and Baroque altarpiece—which would later be replaced by one of Isabelline style in 1869—as fuel.

The new tower, completed in 1850, didn’t last long as the basilica was bombarded during the Third Carlist War in 1873 and the bell tower once again fell to pieces onto the church nave. Its reconstruction in 1881 was not to be its last, as the tower that can be seen today was built by the architect José María Basterra, who erected it for the third time in the early twentieth century, and who knows if it will be its last. 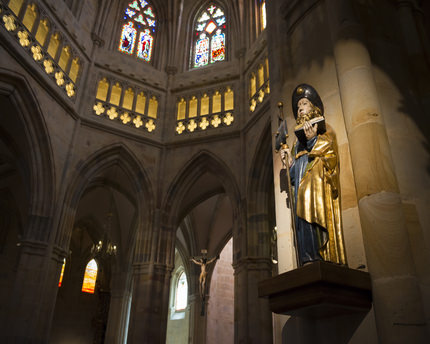 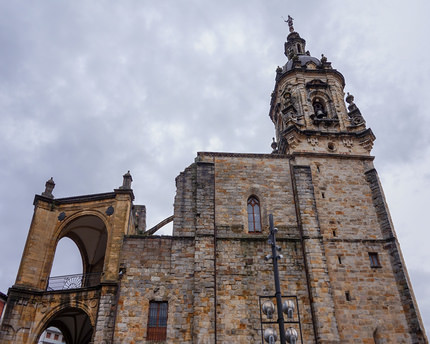