The Zubizuri, an iconic yet controversial bridge 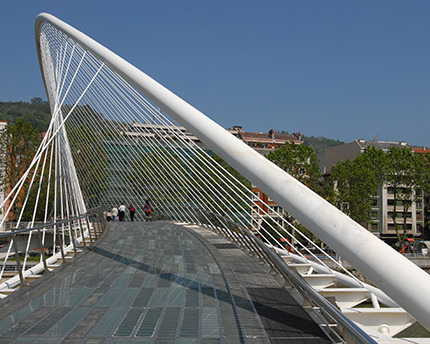 There was a time when the entire city wanted to have one of Santiago Calatrava’s creations. Now, however, the architecture world is split between those who admire his original constructions and those who fiercely criticise their resulting issues and problems. This is precisely what happened in Bilbao following the completion of the Zubizuri Bridge (Basque for “white bridge”), also known as “the Calatrava bridge” or the “Campo de Volantín pedestrian bridge”. This article explains all the details and interpretive keys to help you enjoy your visit to the Zubizuri Bridge and understand the interesting controversy around it.

The idea behind the Zubizuri Bridge

The Zubizuri Bridge dates back to 1990, when Santiago Calatrava designed a structure that would connect Bilbao’s Ensanche district with Calle Campo de Volantín, a popular pedestrian area beacause it offers a pleasant stroll along the Ría del Nervión, with parks and buildings of tremendous architectural interest along the way. However, it was not until 1994 that the City Council awarded the project that would be completed three years later in May 1997, a few months before the Guggenheim Museum opened its doors.

The bridge awarded to the renowned architect from Valencia aimed to help renew a Bilbao district that had struggled following the decline of the city’s essential maritime industry. According to some, the structure’s white hue symbolises this hopeful renewal, although this also happens to be the colour used in all of Calatrava’s designs. Logically, the bridge would also enable pedestrian traffic between two parts of the city. 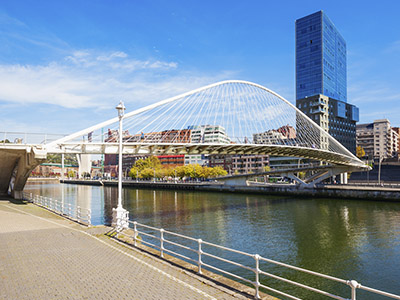 For the project, Calatrava designed a plastic structure that was 75 metres long and crowned by an imposing steel arch, from which a total of 39 steel cables emerged on either side, connecting the arch’s unusual parable with a glass pedestrian walkway. The controversial decision to install a glass deck made it possible to see the structure below that supported the walkway. This effect, at least prior to the modifications carried out by the city council, was further enhanced at night thanks to artificial lighting. Additionally, there are structures on each end of the walkway that house ramps and stairs to reach the street.

Calatrava is one of Spain’s most famous architects, throughout the nation and abroad. In fact, he has received prestigious awards, including the Prince of Asturias Award for the Arts (1999), the Spanish Architecture Award (2005) and the European Architecture Award (2015). His most renowned works throughout Spain include the City of Arts and Sciences in Valencia, the Tenerife Auditorium, the Montjuïc Communications Tower in Barcelona and the Alamillo Bridge in Seville. Some of his international projects include the Women’s Bridge in Buenos Aires, the Turning Torso in Malmö (Sweden), Gare du Oriente station in Lisbon and the Constitution Bridge in Venice. Due to his incessant activity all over the world, he has opened offices in Doha, New York and Zurich. 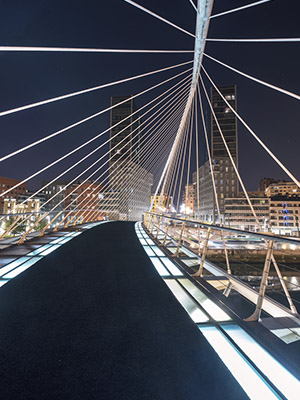 Shifting back to the matter at hand, the Zubizuri Bridge, the first controversy erupted when locals discovered how slippery the glass surface was. Glass was probably not the most suitable material for the bridge’s deck, especially considering how often it rains in this Basque city. In light of the many bridge users who fell, the city council approved various systems to prevent additional slips, such as installing non-slip strips and replacing the tiles with others made of a special glass. It was ultimately decided to cover the entire walkway with a non-slip carpet.

As the first slips and falls occurred, locals also discovered that some of the original tiles were broken. Once the vandalism hypothesis had been ruled out, it was ascertained that the damage was due to a construction issue. The architect became increasingly angry, although the final chapter to this story was yet to come.

The final confrontation between the Bilbao City Council and Santiago Calatrava took place in 2006, when local authorities partially modified the Zubizuri Bridge. The alteration consisted of cutting one of the metal bars to install a walkway linking it to the Isozaki Towers. This work, which according to the City Council was for general interest because it improved pedestrian traffic, led to a lawsuit filed by the architect for the moral rights to the integrity of his creation.

The Biscay Provincial Appellate Court ultimately ruled in favour of Calatrava, stating that “general interest does not take precedence over the architect’s moral rights”. The court also stated that Calatrava’s creation had been modified when the Isozaki Atea walkway was added because its architectural style did not match that of the Zubizuri Bridge.

Calatrava won the battle against the Bilbao City Council, sparking an interesting debate, among citizens and courts, on what should take precedence: general interest or a project’s original aesthetic. 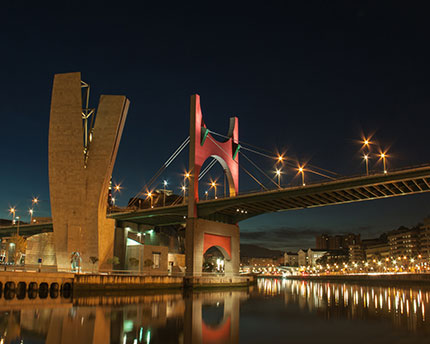