The Old Town of Cáceres, which was declared a UNESCO World Heritage Site in 1986, is an outstanding testament of medieval architecture. In fact, it is the third best conserved medieval site in Europe, rivalled only by the Old Towns of Prague and Tallinn. The walled Old Town stands at the heart of Cáceres and is a remarkable example of a 12th-century Moorish fortification. You can feel the weight of the Old Town’s history as you roam up and down the steep stairways and cobble-stoned passageways to discover monuments shaped by the Roman, Moorish, Jewish and Christian peoples who all called Cáceres home at a certain time in history.

Read on to discover why the incontestably magnificent Old Town of Cáceres is easily the most authentic destination in Spain.

Discovering the historic attractions of Cáceres

Some of the most spectacular and oldest attractions of Cáceres lie within the medieval walls of the Old Town, which was built around two parish churches, Santa María and San Mateo. Here are some of the top attractions that you should not overlook when visiting this lovely town that is steeped in history. 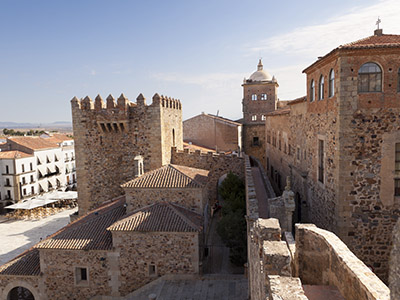 Right after crossing through the Arco de la Estrella and walking up a narrow alleyway, you’ll arrive to the pretty little square where the impressive Catedral de Santa María stands tall. This dramatic, Romanesque cathedral was built between the 15th and 18th century and includes Gothic and Renaissance architectural features.

The square is also flanked by a number of handsome fortress-houses, palace-houses and mansions which have been declared historic monuments and make for a fascinating visit. In fact, the 15th-century Palacio de Carvajal is one of these buildings. This former noble home now houses the Regional Tourist Office after being beautifully restored. You can also visit Palacio de Ovando and Palacio de Mayoralgo, which still bear the former owners’ coat of arms etched in the stone, a testament of the city’s prolific noble families.

However, the grand Palacio de los Golfines de Abajo is without a doubt the star of the show. The extravagant palace was once the home of the prominent Golfín family, who hosted the Catholic Monarchs on more than one occasion when they were in Cáceres. 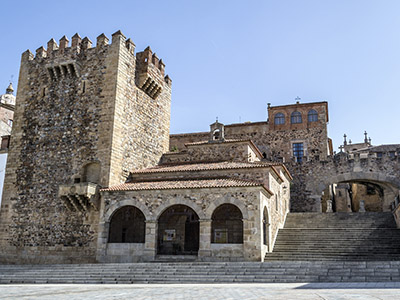 A little further ahead lies Plaza de San Jorge located smack in the middle of the walled centre. Come admire the stunning 18th-century, Baroque Iglesia de San Francisco Javier, built by the Jesuits before they were expelled from Spain. The church houses the fascinating Holy Week Interpretation Centre of Cáceres and an ancient underground cistern.

The next stop is Plaza de San Mateo, beside the neighbouring squares of Plaza San Pablo and Plaza las Veletas, located at the highest point of the Old Town. You’ll need to wander up the tiny passage of Cuesta de la Compañía to reach the square, where you’ll be greeted by the impressive Plateresque façade of Iglesia de San Mateo, which was built at the beginning of the 16th century on the site of an old Moorish fortress. Just off to the side, sits Convento de San Pablo, a 15th-century, Gothic convent, inhabited to this day by cloistered nuns who bake delicious local bisuits that are served from behind a revolving contraption. Just around the corner rises Palacio de las Cigüeñas and its 25-m high tower, which offers sweeping views of Cáceres. Afterwards, head to Palacio de las Veletas, a 15th-century mansion named after the numerous weather vanes crowning the spires. Nowadays, it houses the stunning archaeological and ethnography collections of the Museo de Cáceres.

Cáceres came to have two Jewish quarters: the Old Jewish Quarter within the walls of the Old Town, and the New Jewish Quarter built outside the Old Town walls in 1478. This immaculately preserved neighbourhood invites you to step back in time and discover what some consider to be the prettiest part of the town. Stroll along the narrow, cobble-stoned streets, flanked by white-washed houses, and quaint squares and cul-de-sacs that make up this century-old maze. 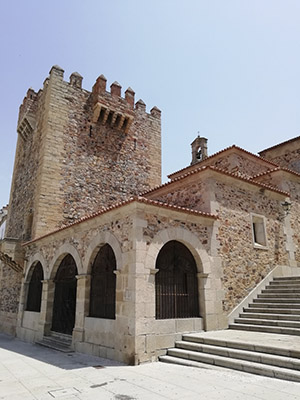 Some of its most notable landmarks include: the pretty chapel of Ermita de San Antonio, built over the site of a former synagogue; and Baluarte de los Pozos, a battlement composed of two towers, Torre de los Pozos and Torre de los Aljibes, which offer stunning views of the town.

Outside the walls of the Old Town

The neighbourhood located just outside the walled Old Town warrants a visit. The picturesque parish churches of Santiago and San Juan, and the beautiful, sprawling Plaza Mayor de Cáceres are just a few examples of the sights you’ll be treated to.

Plaza Mayor was the social and political centre of Cáceres. It initially hosted fairs and markets, but now bars and restaurants line the arcade. You’ll need to walk through the solemn Arco de la Estrella to penetrate the walled Old Town.

The handsome square also houses the historic Torre de Bujaco, built by the Moors in the 12th century. Pay a visit inside and discover the fascinating history of Cáceres at the interpretation centre. The square is also flanked for other notable historic landmarks such as the 18th-century Ermita de la Paz and the Town Hall, which first opened its doors in 1869. 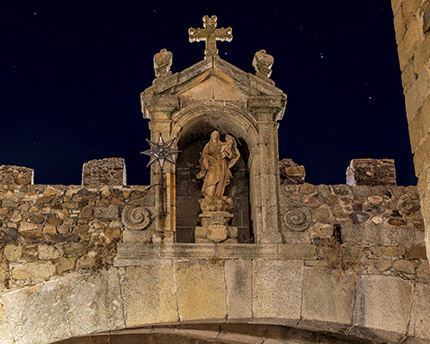