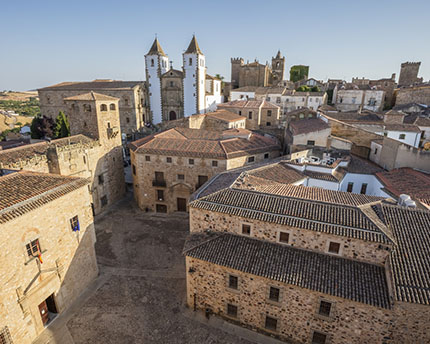 You’ve finally decided to go on that long-awaited getaway and spend a few days in Cáceres. This city is the perfect size for a weekend getaway.

Its unique mix of architecture and delicious cuisine will accompany you every step of the way through its beautiful streets. Relax, stroll around, and enjoy discovering all the special places that await you in this city where the towers and stork’s nests give it personality.

Walking through the old town

The best way to get to know the old town of Cáceres, declared a World Heritage Site by Unesco, and where most of its attractions are to be found, is on foot. Many areas are closed to traffic and are accessible to pedestrians, so you won’t miss out on any of its medieval charm. In the historic part, surrounded by the walls, you’ll be able to track the architectural evolution of the city through its buildings.

A great idea would be to stay at the modern Hotel Barceló Cáceres V Centenario, located in a quiet area a short distance from the centre, which you can reach by car, public transport or by taking a pleasant stroll. A swimming pool, terrace, and an excellent restaurant where you can taste the exquisite cuisine of Extremadura will put the finishing touch to your stay in Cáceres.

Start at the Plaza Mayor

One of the best starting points is the Plaza Mayor. From here you can see some of the medieval buildings and traces of Cáceres’ Moorish past. The towers gradually make their presence felt, such as the Torre de la Yerba.

The Town Hall is located towards the south. You can continue walking along Calle Pintores if you want to do some shopping, as this is the main shopping street where the shops are located. In the arcades you’ll find some bars and restaurants, so you’ll be able to see why Cáceres was elected Spain’s Gastronomic Capital in 2015. Make a note of El Requeté and La Minerva.

Enter the old town through the Arco de La Estrella

If you’re in the Plaza Mayor, you couldn’t be better placed to enter the most famous part of the entire wall and enter the old town: the Arco de La Estrella. 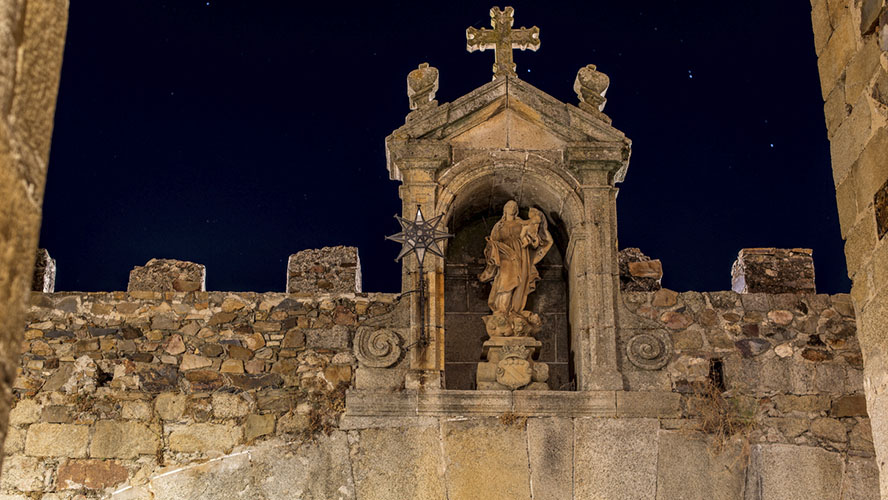 It dates from the 15th century and is located next to the Bujaco tower. I’m sure you can imagine the carriages of the Middle Ages entering it to enter the city. Remodelled in the 18th century and crowned by the coat of arms of Cáceres, it’s one of the spaces immortalised in the series Game of Thrones.

Panoramic views from the Bujaco tower

This structure, built on Roman blocks of stone, is one of the icons of Cáceres, as well as one of the examples of Almohad architecture in the old quarter. Standing 25 metres tall, climbing the battlements of the Bujaco tower is an absolute must if you want to enjoy the views.

From here you can also see the Moctezuma Palace, the Episcopal Palace or walk along the upper part of the wall. This is one of the most popular things to do here.

The cultural heritage of the Cáceres Museum

In the San Mateo neighbourhood, there are several squares that are worth a stop along the way. One of them is the Plaza de las Veletas. Here stand two beautiful historic buildings, the Palacio de las Veletas and the Casa de los Caballos, which today make up the Cáceres Museum. 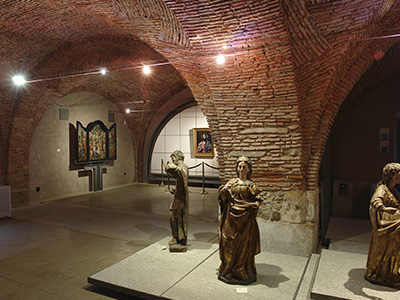 A place full of history where you can explore the rich heritage of Extremadura from the Palaeolithic period to the Contemporary Age. The beauty of the buildings, the immense collection of archaeology, ethnography, and visual arts, and the impressive Arab cistern, preserved inside, make a visit worthwhile. What’s more, its free of charge.

The solemn presence of the Co-Cathedral of Santa María

Every self-respecting medieval city should have a cathedral to match. Cáceres Cathedral is one of the oldest surviving buildings in the city. It was built in the 15th century in the Gothic style. It has a single tower, built in the Renaissance period, which you can climb to enjoy the panoramic view. Walking around this area at night with its dim lighting may be the perfect end to a romantic evening.

The Carvajal Palace and its secret garden 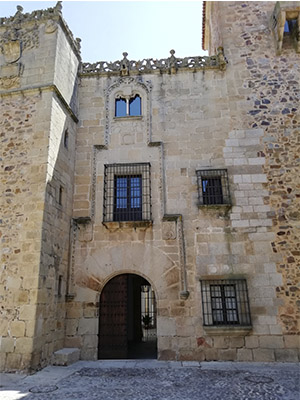 If you’re next to the Cathedral, take the opportunity to visit the Carvajal Palace, which is also known as “the Burnt House” because of a fire that broke out in the 19th century. The Carvajal family built their residence in the 15th century, although the adjoining round tower may be of Arab origin.

Inside, a beautiful courtyard and a lovely garden await you, where you can relax and admire the enormous centenary fig tree that stands here.

The splendour of the Palace of the Golfines de Abajo

The impeccable condition of the monuments of Cáceres makes it very easy to travel back in time. This grandeur is evident in one of the best examples of the city’s palace architecture, which even served as accommodation for the Catholic Monarchs. In the palace of the Golfines de Abajo you will be able to distinguish between the 15th-century fortress-house and the more classical style of the early Renaissance in the 16th century. Stop to look at the coats of arms of the Catholic Monarchs in the windows.

The Renaissance in the Godoy Palace

Continuing with palatial architecture, another of the buildings steeped in history in the monumental complex of Cáceres is the Godoy Palace. You’re sure to be amazed when you look at its Renaissance-style façade.

This structure was ordered to be built in 1548 by Francisco de Godoy Aldana, a Spanish military figure who served under Pizarro in the conquest of Peru and who returned with an immense fortune.

The Arab past at the Yusuf Al Burch House 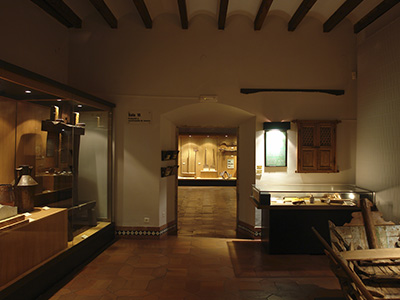 The mark of the Almohad peoples can be seen in many corners of the city. But one of the most superb examples is near the Plaza de San Jorge, on the Cuesta del Marqués.

The Casa Museo Árabe Yusuf Al Burch has been completely restored thanks to the work of José de la Torre Gentil when he acquired it in the 1960s. The entrance hall, the tea room, the courtyard, the harem, and the hammam are the spaces that await you in this place full of legends.

The fresh air of the Prince’s Park

Once you have explored the old quarter of Cáceres, there are still places to discover in the rest of the city. If you fancy a stroll through the green parts of the city, head to Avenida de Hernán Cortés to find the Prince’s Park.

A peaceful pond, an open-air sculpture museum, and a botanical garden await you across more than 20 hectares, while you forget about the hustle and bustle of the city.

At Barceló Experiences you can continue your journey through the charms Spain has to offer, by visiting our complete tourist guides to other must-see destinations such as Madrid, Cadiz, Asturias, Valencia, Seville or Granada. 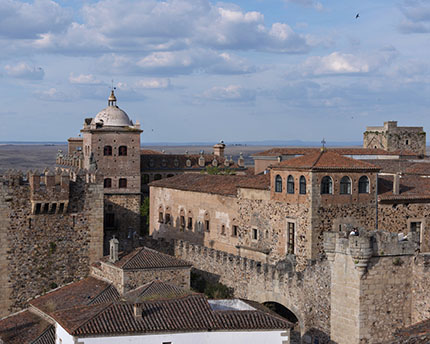 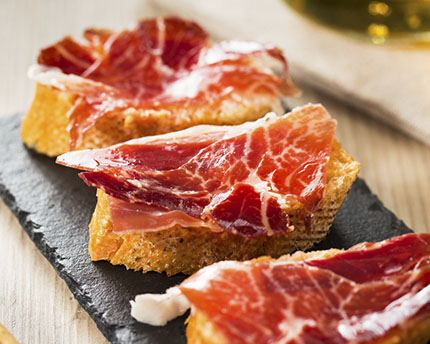 Tapas in Cáceres: social life in the city 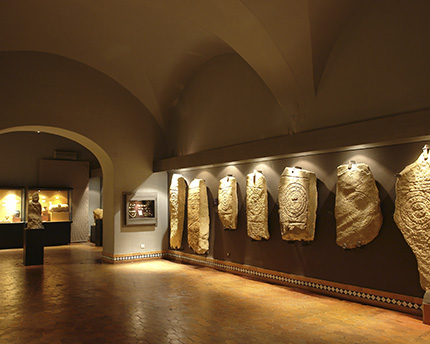