Surfing and kitesurfing in Tarifa: come to the kingdom of wind and waves 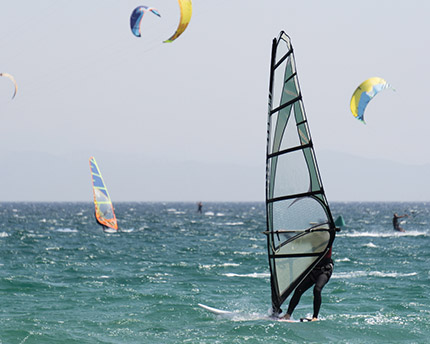 Whether coming to Tarifa by road or sea, you’ll be greeted by a multi-coloured mosaic of playful sails dancing with the wind. These are Tarifa’s enormous kitesurfing kites, forever seeking gusts of wind from the east and west. The kites are designed to be caught by the wind, jumping into a series of impossible pirouettes several metres above the waters which lap onto the seemingly-endless beaches of this Cádiz municipality.

The city of Tarifa, where the wind blows 300 days a year, has become, in its own right, the “international mecca of wind and water sports” such as kitesurfing and windsurfing. Tarifa’s waves have also attracted surfing enthusiasts to its beaches. Slowly but surely, the increasingly popular stand-up paddle boarding also continues to gain prominence on its shores.

Surfing in Tarifa: how and where to do it

Tarifa’s suitability as a surfing beach has long been a contentious issue, with many arguing that it’s not a good spot for those who are only looking to surf. While the area is an authentic wind trap, Tarifa’s waves—raw material for surfing—are another issue altogether. Tarifa isn’t a surfing hub like several beaches on the Cantabrian Sea—such as Mundaka in the Basque Country and Las Salinas in Asturias—but the several kilometres of beach running along this Andalusian municipality mean that the waves sometimes take a long time to break.

The best time to go surfing in Tarifa is in autumn and winter, as this is when there is a swell (maritime phenomenon that increases the chances of surfable waves). The temperature of the water and the area in general is relatively stable all year round. The Playa de los Lances, located very close to the city, has a designated surfing zone right in front of the Isla de las Palomas. The best time to go surfing is when there is a westerly wind, entering directly from the sea and generating excellent waves.

Tarifa’s waves, relatively big and long-lasting, make it the perfect place to learn how to surf. As such, the city has many surf schools. It is most common for beginners to learn how to surf in a single two-hour lesson, of which there are various types: private (with a single student), semi-private (with two-to-three students), group lessons and lessons for children.

The schools usually provide transport and all of the required kit, including the surfboard and wetsuit. You can pay for single private lessons or multi-lesson ‘packs’.

Kitesurfing: the king of sports in Tarifa 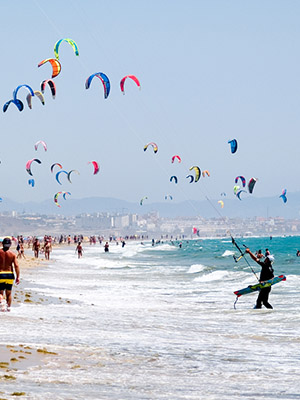 Kiters on the beach in Tarifa

With only fifteen years of history, kitesurfing has become the king of sports in the area, with Tarifa now being regarded as one of the world’s top spots for practising this sport. Kitesurfing took the baton from windsurfing, which was at its peak popularity in the 1980s and 1990s.

Tarifa’s most popular kitesurfing spots are the Playa de los Lances (although not in summer, when it is forbidden), the Playa de Dos Mares and the Playa de Valdevaqueros. The latter is the most popular amongst kitesurfers. This is a very long beach, located 5 kilometres from Tarifa, with a parking area that allows you to park your car right next to the ocean. This saves you the hassle of lugging all of your kit down a long trail towards the water.

Kitesurfing, above all else, requires wind; particularly easterly wind, as this is stronger than westerly wind. On days with a strong easterly wind, it’s commonplace to see hundreds of different kitesurfers from all over the world along these beaches.

The world’s most renowned kitesurfer, the Catalan 10-time kitesurf world champion Gisela Pulido, has her own ‘headquarters’ in Tarifa. In fact, she has spent lots of time kitesurfing along these coasts.

Being the most popular sport in the area, Tarifa has as many or even more kitesurfing schools than it does surf schools. In fact, many of the kitesurfing schools also offer surf lessons. Sportspeople of all abilities come to Tarifa to go kitesurfing, whether to take their first steps in the sport or to finely tune their technique. The schools offer both types of lessons.

The prices vary depending on whether it is a private, semi-private, group or kids’ lesson. Discounts are also offered on courses lasting several days. When booking a kitesurfing class or lesson, we recommend finding out if the school also provides all of the necessary equipment.

A recent arrival onto the scene, stand-up paddle boarding (also known as ‘paddle surfing’) continues to gain popularity. In a city such as Tarifa, where water sports are a lifestyle, it has been warmly received. Stand-up paddle boarding (SUP) consists of standing on top of a large surf board, using a paddle to propel you along the water.

There are two types of SUP: flatwater and surfing. The waters of Tarifa offer the perfect conditions for both varieties. Flatwater stand-up paddle boarding doesn’t require a specific area and the enormous beaches of the surrounding areas offer long stretches of water with fantastic views, as long as the water isn’t too choppy.

For surfing stand-up paddle boarding, there are several spots along the Playa de Los Lances, among other beaches, where you can practice this sport. 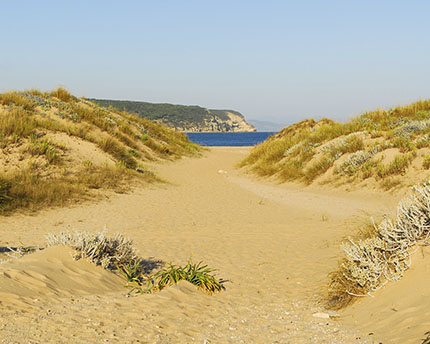