The monastery of San Lorenzo de El Escorial is regarded as one of the eighth wonders of the Old World, and for good reason. Visits to these kinds of monuments demand a degree of preparation in advance, if we are to understand them and truly appreciate their magnificence. They also require time, so it is worth setting aside a whole day to see them properly, and then to take advantage of the opportunity to go for a stroll or have a meal in the surrounding area, which has some good restaurants. The distance from Madrid to El Escorial is just over 50 km, but if you are travelling by car, you should allow an hour for the journey.

Why was El Escorial built?

This monastery (which has been declared a World Heritage Site by UNESCO) was built on the orders of King Philip II in the mid-sixteenth century as a mausoleum for his parents, Charles I and Isabella of Portugal. It was named San Lorenzo de El Escorial in commemoration of the victory over the French in the battle of St Quentin in 1557 on 10 August, the day dedicated to the saint. This immense building, erected between 1562 and 1584 (although the church was not consecrated until 1595), was the work of Juan de Herrera and Juan Bautista de Toledo. They both took great care to comply with the King’s wish regarding the simplicity of the edifice’s lines. In fact, the ground floor bears some resemblance to a grill, a reference to the saint’s martyrdom by burning.

San Lorenzo was set up as a monastery of the order of St Jerónimo, as the intention was that the monks would spend their time in constant prayer for the kings and queens interred there. It was also designed as a palace fit to be a residence for a monarch and his entourage. So the complex required a basilica, a royal palace, a monastery, a seminary and a library. This would make it a perfect retreat for meditation, study and prayer. 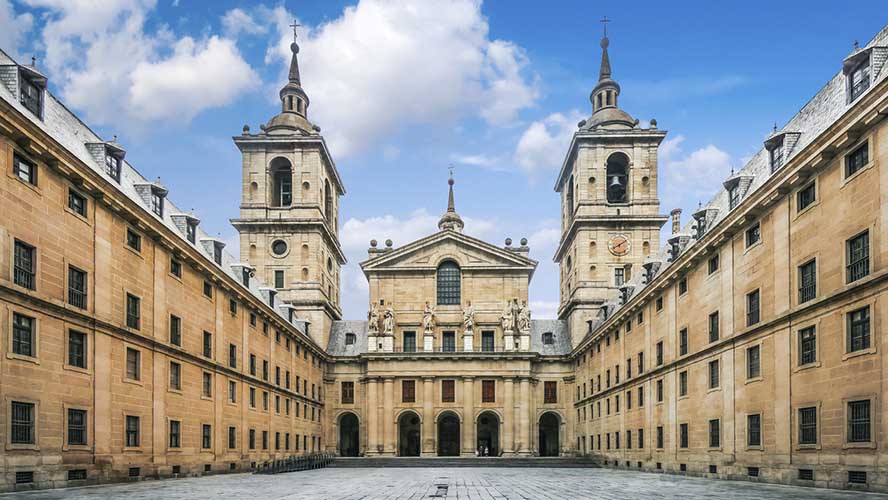 Philip II was closely involved in the project, and supervised the whole process—although he had placed it in good hands. Juan Bautista de Toledo had already worked as an assistant to Michael Angelo on St Peter’s Basilica at the Vatican, and after the death of Juan de Herrera, continued the latter’s work, although Herrera’s influence shows plainly in the completed edifice. In fact, his style is known as “herreriano” [Herrerian]. The architecture and aesthetic aspects of El Escorial are a synthesis of Spanish and Flemish styles. It could be described as the work that best epitomises the cultural aspirations of Golden Age Spain.

The King liked to spend long periods at his palace, where he would stay from Holy Week until well into the autumn. His successors also liked to stay there, particularly in November. In fact, it was Philip V’s idea to spend the final months of the year there. A custom adopted by the other Bourbon monarchs until Isabella II.

This vast complex, located in the foothills of the Guadarrama mountains, was somewhat isolated, so Charles III decided to create a court community around it, a task he assigned to Juan de Villanueva. This architect, with his classical Italian training, planned the Casa de los Infantes [Princes’ House] and the house of the Minister of State. Gardens were created around the monastery, as well as the Lonja, a large flagstone mall that leads up to the entrance.

A visit to the monastery of El Escorial 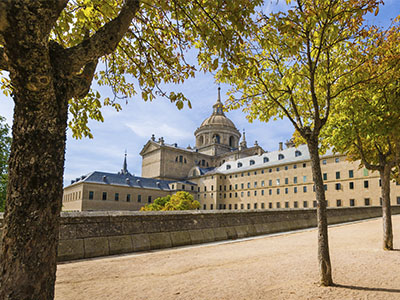 Following this succinct historical introduction, we will now turn our attention to this magnificent edifice, a parallelogram constructed in granite, with a floor area of 207 x 161 metres, and a tower standing at each of its four corners. The figures are amazing: it has 15 cloisters, 16 courtyards, 1,200 doors, 300 monastic cells and 2,600 windows. A few of the areas you really must see during your tour are:

It stands out from the building, as it is taller; it has a Greek cross floor plan and the cupolas were decorated with frescoes by Luca Giordano. Note the sculpture of the crucified Christ carved by Benvenuto Cellini in Carrara marble.

Philip II’s intellectual nature was revealed by the creation of this room, which holds over 4,000 manuscripts and 40,000 books. Sadly, part of its treasures was destroyed by fire in 1671. Juan de Herrera embellished this room with a barrel vault painted by Pellegrino Tibaldi, depicting female figures representing the seven liberal arts.

The monastery has two mausoleums: one for the monarchs and another for the royal children. The monarchs’ mausoleum, which is situated beneath the Basilica’s high altar, is extravagantly opulent, with its walls covered in marble, bronze and jasper. In its style can be seen the influence of the Medici chapel in Florence. The outstanding feature of the other complex is the mausoleum created to hold the tombs of royal children. 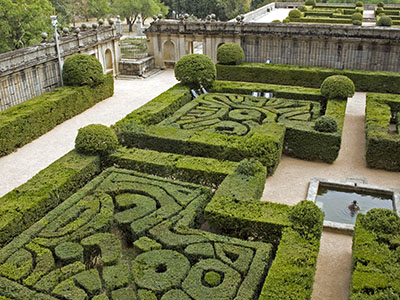 Philip II’s private apartments were very modest, with terracotta floors and whitewashed walls, as you will see during your visit. The chair in which he was carried on his last journeys is displayed (he was afflicted with gout).

Both the Hapsburg and the Bourbon palaces are an essential part of any tour. The former is quite understated; its outstanding features are the Ambassadors’ Room and the Throne Room. The Bourbon palace, however, is Baroque in style, with an abundance of tapestries, silks, porcelain and splendid gilded embellishments.

Other parts of the complex worth a visit include the Museum of Architecture, the Museum of Art, the King’s Courtyard, which affords the best views of the Basilica, and the Salas Capitulares [Chapter Houses], whose walls are hung with important paintings.

Once you have finished your tour, you could opt for a stroll across La Herrería to see the Silla de Felipe II. This is a seat carved into the rock, from where it is said the King oversaw the progress of the building works. It is a very pleasant walk, and the viewing point commands a beautiful panorama of the monastery and the village.