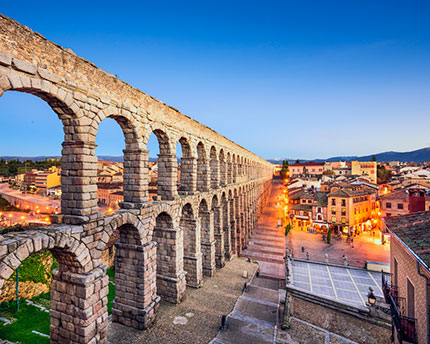 Segovia astonishes visitors at first glance. When approaching by road or train, the city’s skyline and tapered monuments emerge on the horizon: an image that began to be forged almost 2,000 years ago when the Romans built their remarkable aqueduct.

With its own fair share of ups and downs, the city has played an important part in the history of Spain. In fact, it is the birthplace of Isabel I (the Catholic Queen) and where she was proclaimed Queen of Castile, although not without controversy and war. Such history has left behind rich artistic and patrimonial legacy, so much so that in 1985 the Old Town of Segovia was declared a UNESCO World Heritage Site.

The Aqueduct of Segovia

Without a doubt, the city’s most striking monument is its aqueduct, above all when you consider that it was built without the aid of any mechanical apparatus and that its enormous blocks of stone have stood there for 19 centuries without any mortar to join them together. All it relies on is gravity as the ingenuity of the person who designed the perfect tiers of arches that support it.

Construction began in the second century AD, during the reigns of the Emperors Trajan and Adrian (both Hispanic). The aqueduct’s purpose was to transport water from the Acebeda river, from the nearby Valle de la Fuenfría, to Segovia.

Thanks to various refurbishments carried out throughout the centuries, the aqueduct has been preserved in almost its entirety. The most remarkable point is where it crosses Plaza del Azoguejo, which is also the tallest part of the aqueduct at a height of 28 metres. 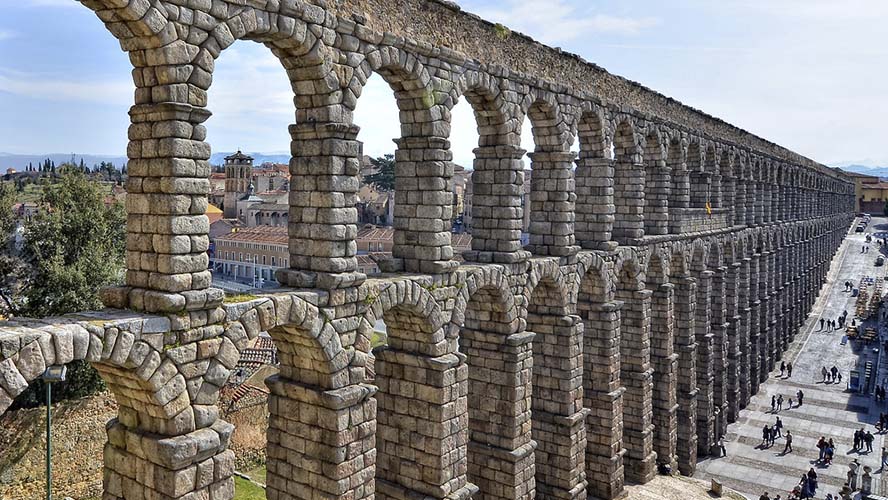 The Alcázar of Segovia

As striking as the aqueduct (if not more) is the Alcázar of Segovia, the cradle of Queen Isabel the Catholic. The construction started off as a fort and over the course of the centuries it transformed into a royal palace. Each monarch added their own wings and architectural details until all that was left was the structure that stands today.

One of the front walls of the Alcázar, which is topped off by a fortified tower with a conical roof made from black slate, seems to float above the rocky crag upon which it stands, above the confluence of the Eresma and Clamores rivers. Many compare this perspective of the Alcázar with the bow of a ship making its way through Castile’s non-existent seas.

The most prominent feature of the Alcázar is the Tower of John II, which, after a tiring climb up to its rooftop, provides magnificent views of the rest of the city, the nearby Sierra de Guadarrama mountain range and Segovia’s empty grasslands. 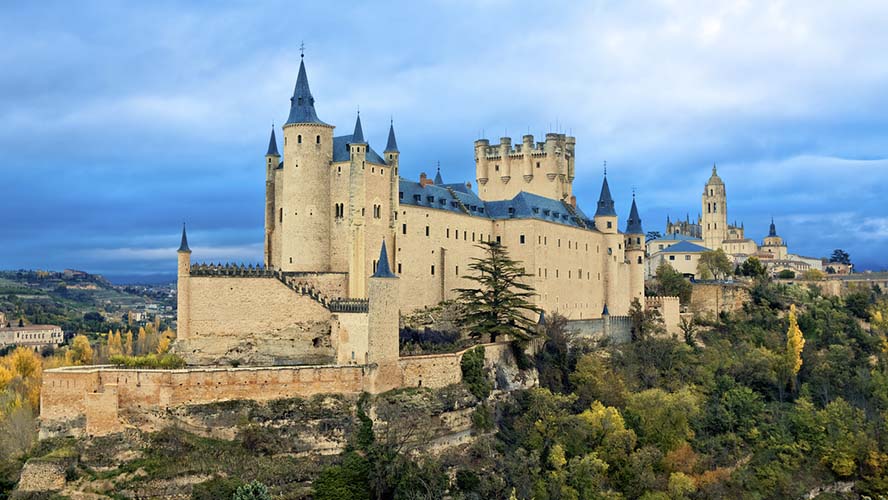 In terms of the palace’s interior, below are some of its most notable rooms:

What to see in Segovia

Besides the aqueduct and the Alcázar, Segovia boasts places that deserve to be seen in their own right, the most notable being the Cathedral (sixteenth–eighteenth centuries). With a 30-metre tall nave and a belfry spanning 88 metres, it is the tallest Gothic-style cathedral in Spain. On the outside, a particularly striking feature is its apse, with the lateral chapels decorated with spires typical of Flamboyant Gothic style.

Other recommended monuments and places of interest in Segovia include:

Home to the Cathedral as well as the City Council building and the Church of San Miguel. It also boasts some pleasant bars and cafés beneath the porticos. 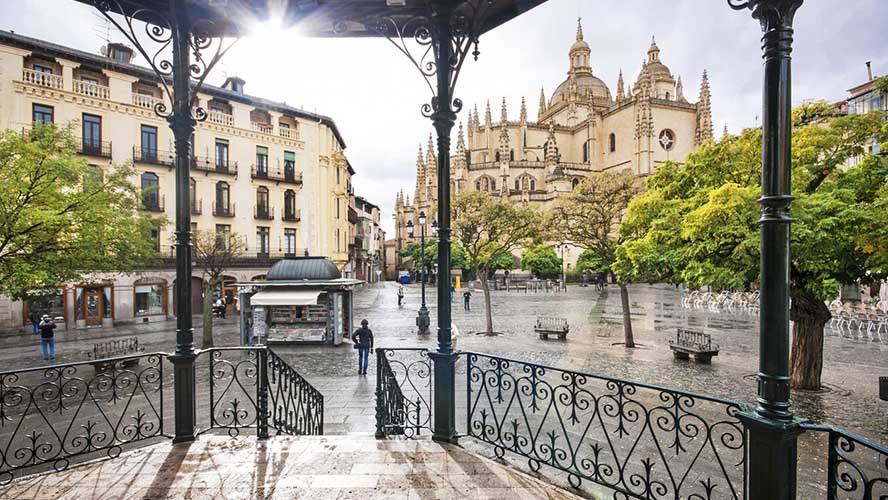 Dating from the fifteenth century and built in Renaissance style, it is known as the Casa de los Picos [the House of the Sharp Points] because of the over 600 pointed blocks that adorn its façade. It was designed by Pedro López de Ayala for the councilman Juan de la Hoz. 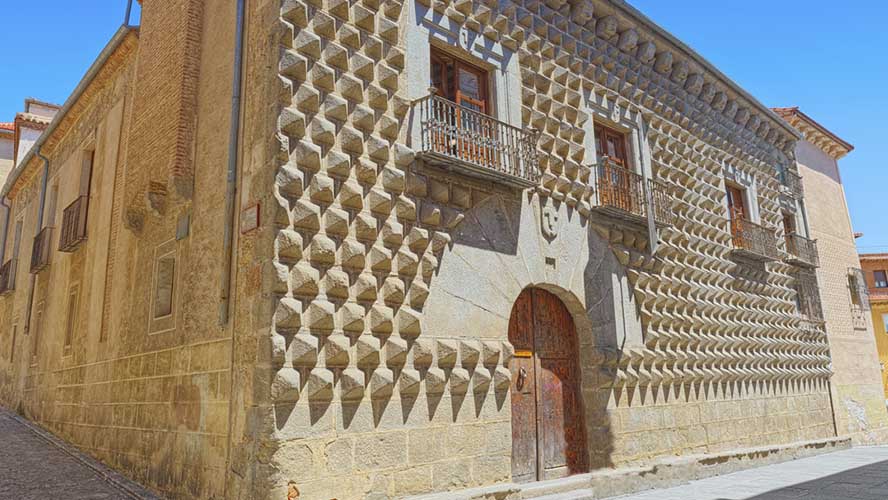 Spanning more than five centuries of history, a particularly notable feature is the Church of San Martín and the monument of Juan Bravo, one of the comuneros of Castile who led a revolt against King Charles V.

Despite the fact its importance dates back to the Middle Ages, part of its original layout still remains, in addition to what was the main synagogue, now converted into the Convent of Corpus Christi. 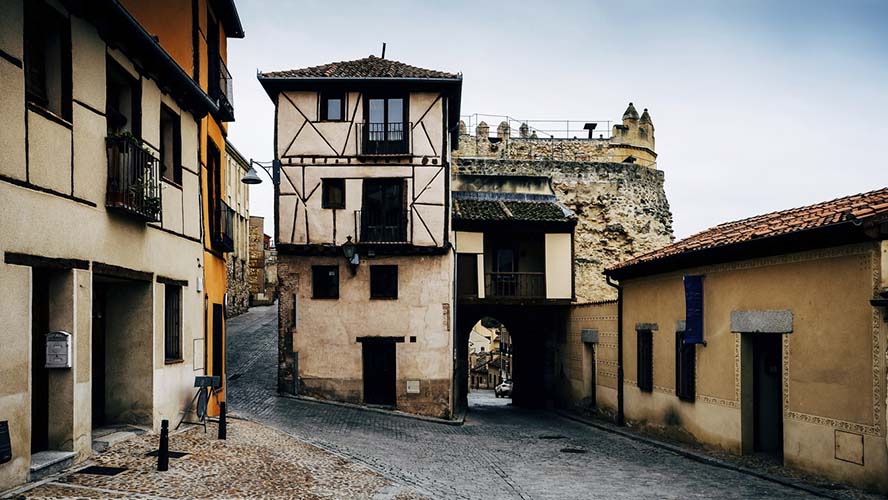 From here, at the base of the Alcázar, you can enjoy one of the most spectacular views of the building. In terms of the church, it was built in the eighteenth century by Knights Templar and modelled on the Church of Holy Sepulchre in Jerusalem.

You can’t visit Segovia without tasting what is considered its speciality: roast suckling pig. A genuine delicacy, particularly owing to its crispy outer skin and juicy meat. Some of the best restaurants in which to sample it include: 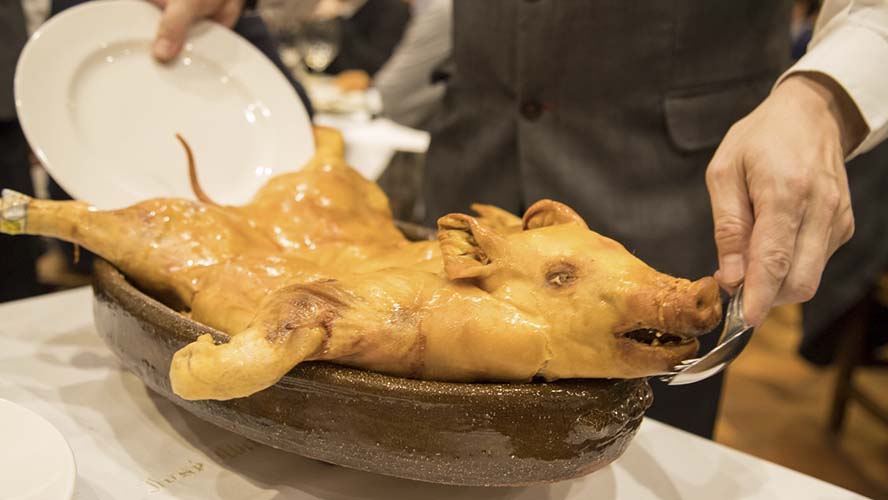 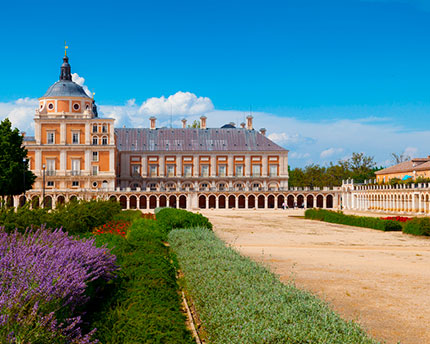 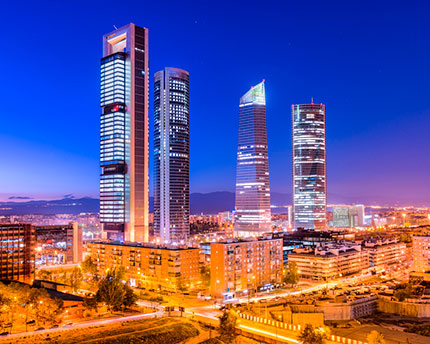 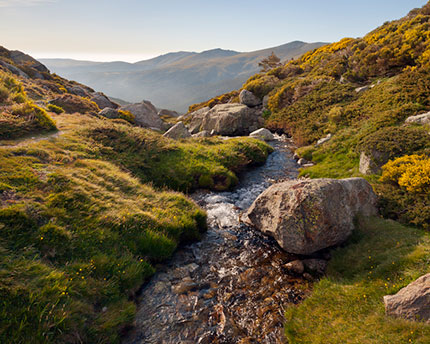