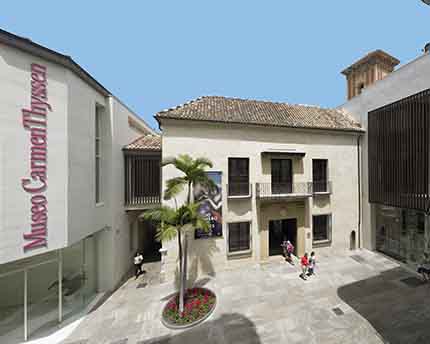 These days, to speak about Málaga is to speak about museums. The arrival of renowned cultural institutions has played a key role in the incredible transformation that the city has undergone over recent decades. The pioneer was the Picasso Museum in 2003, followed by the Carmen Thyssen Museum Málaga in 2011, and rounded off by the arrival, in 2015, of the collection of the State Russian Museum of St Petersburg and the colourful branch of the Parisian Centre Pompidou. Art enthusiasts therefore cannot complain about a lack of options in the capital of the Costa del Sol.

Today, however, our focus turns to the amazing collection brought together by Baroness Thyssen, who assembled, in the Andalusian city, an essential sample for exploring one of the most interesting and at the same time, little known, phenomena in Spanish art: nineteenth-century painting.

Villalón Palace: the location of the Carmen Thyssen Museum Málaga

The Carmen Thyssen Museum is situated in the historic centre of Málaga, a short walk away from the elegant Calle Marqués de Larios and Plaza de la Encarnación. The space chosen to house the collection was Villalón Palace, a residence built between the late fifteenth century and the early sixteenth century, standing as a magnificent example of civic Renaissance architecture.

In spite of the alterations that the building was subjected to over the course of history, its rehabilitation, carried out by the studio RG+ASOCIADOS, has helped to restore the original design, as well as annex new exhibition spaces to the existing building. The final result has found a harmonious balance between the original rooms of the palatial residence and the modern spaces.

Remains of an ancient Roman villa and what has been identified as a factory where fish was conserved were also discovered on the grounds of the current museum.

The collection of the Carmen Thyssen Museum Málaga 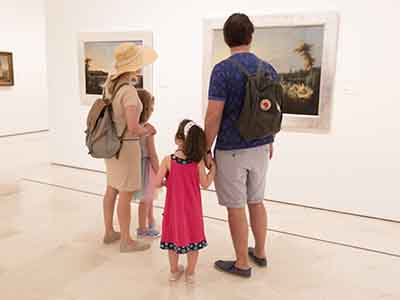 Unlike other large museums where it is almost impossible to see the entirety of the exhibited works—or, at the very least, enjoy and appreciate a specific artistic period—the Carmen Thyssen Museum Málaga presents a collection designed with the utmost care by Tita Cervera (Baroness Thyssen), perfect for examining the evolution of Spanish painting—and Andalusian in particular—throughout the nineteenth century. The collection is structured around four distinct categories:

The paintings of Ramón Casas, Joaquín Sorolla, Marià Fortuny and Julio Romero de Torres, among others, round off this fascinating journey through the history of nineteenth-century Spanish painting.

The Botanical Garden of Málaga: the Marquises of Loring’s tropical paradise