The Costa Blanca, as the coastline of the province of Alicante is known, is home to veritable gems. There you will find everything from beautiful urban beaches that you can enjoy together with the whole family including the little ones and remote coves that are hard to get to. Discover what we consider to be the best beaches and coves in Alicante.

This beach in Benidorm spans around two kilometres from Punta Pinet to Punta Canfali. It has a width of 40 metres and gentle waves, which make it a perfect beach to enjoy on a family holiday. Situated just a short walk from the city centre, the urban beach is one of the most visited in Europe. It can be easily reached by foot along the seaside promenade that runs along its entire length. During the summer months the beach has a fantastic atmosphere and, thanks to its south-facing orientation, you can sunbathe until the last few rays of sunshine fade on the horizon. 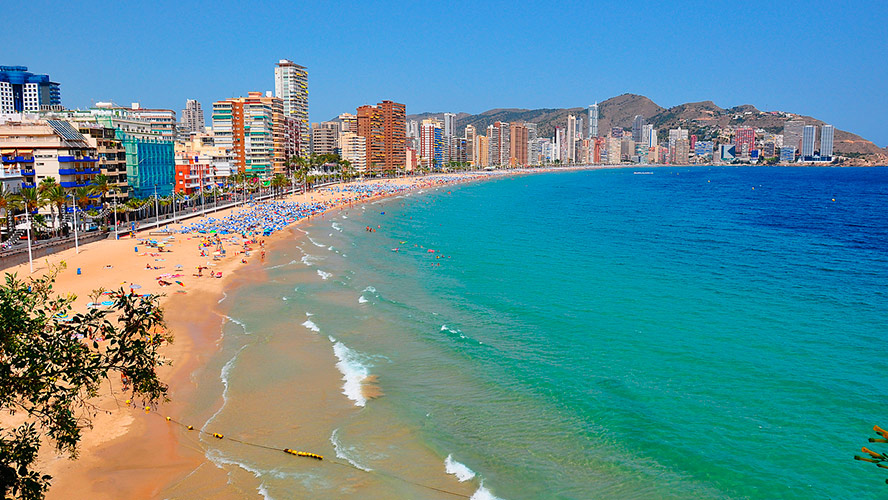 This unspoilt, nudist cove with a length of 100 metres is situated close to Cabo de la Nao, in Jávea. It can be reached via a relatively safe stairway. However, warnings of falling rocks are issued and swimming is occasionally prohibited. It is named after the sixteenth-century watchtower that was used to defend against pirate attacks. 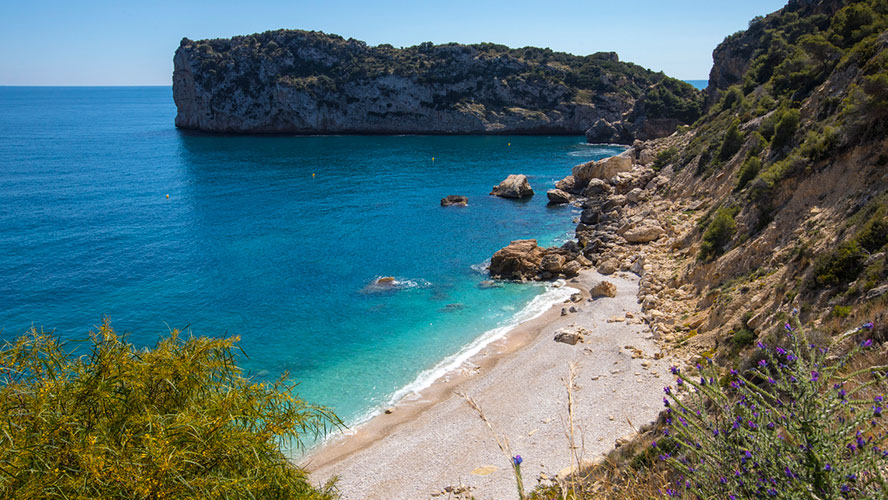 Three kilometres away from Benidorm is this small urban cove with fine sand and calm water. The promenade is replete with bars, restaurants, ice cream parlours and all kinds of shops. It even has pleasant areas where you can sit down and enjoy the sea breeze on hot days. Due to the fact it is the only beach in the municipality of Finestrat, it can get quite busy with tourists in the summer months. 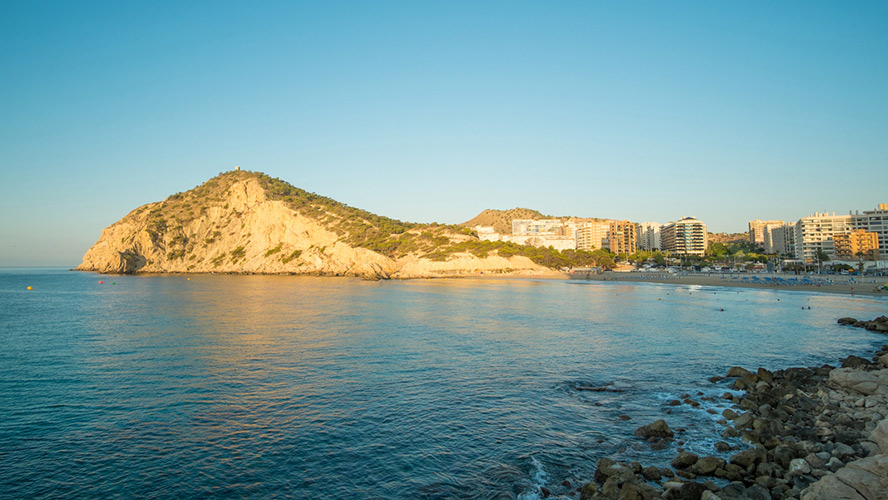 Unlike the other beaches, this one doesn’t have any buildings or a seaside promenade. Instead it is backed by a wide expanse of dunes and pine groves and is accessed via a wooden walkway. It doesn’t usually get that busy, although the southern section of the beach is frequented by naturists, who make the most of the privacy offered by the dunes to sunbathe swimwear-free.

This pebble beach is situated in the Sierra Helada or Serra Gelada Natural Park. It is a popular spot for water sports, such as surfing, windsurfing and even kayaking, an activity that allows you to explore the coast and discover true gems. What’s more, its rocky sea floor is a spectacular place for scuba diving. 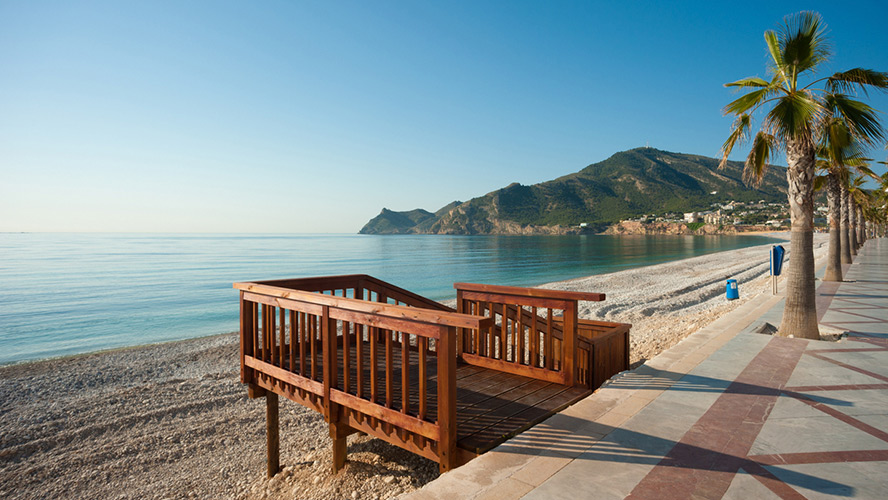 Located 11 kilometres away from Jávea, this small pebble cove is famous for its calm, crystal-clear waters. Don’t forget to bring goggles and a snorkelling tube so you can enjoy the incredible ocean floor. If you’re an experienced diver, we also recommend scuba diving in the area. 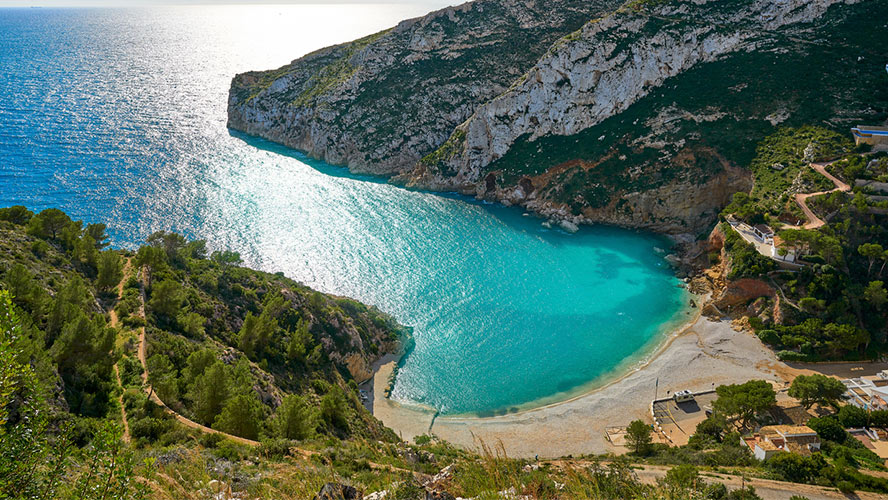 This small, shell-shaped cove is located on the Cap d’Or peninsula, around five minutes by car from the centre of Moraira. Thanks to the peninsula, which protects it from the wind, its waters are calm and you can swim in complete tranquillity. The area is also very popular with fans of kayaking and paddleboarding. 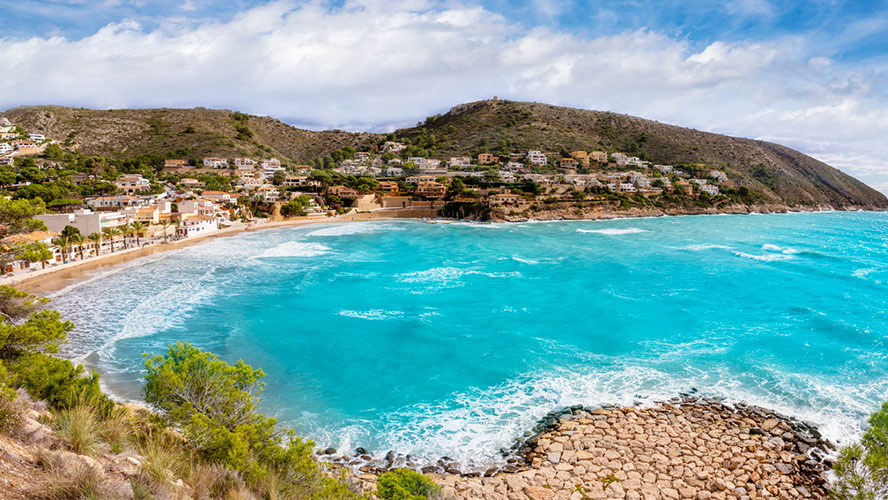 Four kilometres away from Benidorm, this remote nudist cove is separated in two by a large rocky crag. Although the road leading to the beach is not the easiest, the beach boasts stairs and handrails to help you along the way. The ocean floor here is also great for diving or snorkelling.

Situated in Benitatxell, this beach is famous for its spectacular rock formations both in and out of the water. It boasts an area known as Los Arcos cave, where the sea flows in through three stone arches. You can get there by foot, always taking the utmost caution, or by diving through its submerged galleries if you’re an underwater expert. That said, we recommend visiting during the low season. 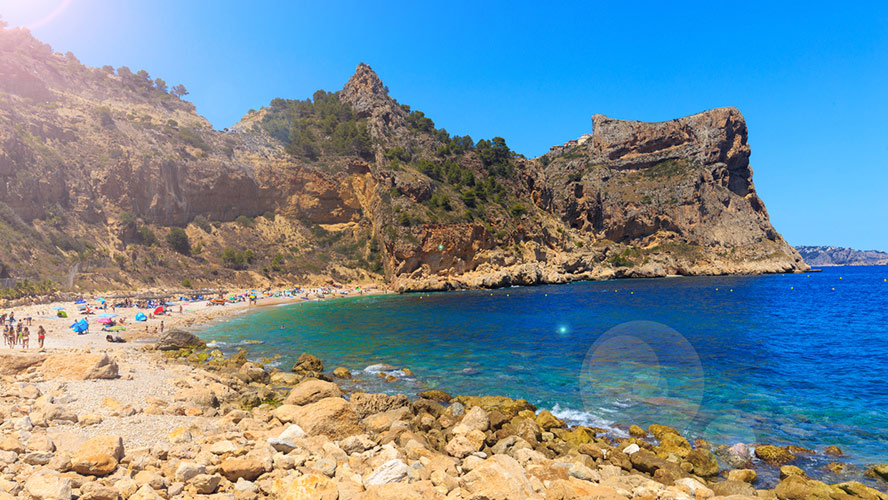 Tabarca Island, the only inhabited island in the region of Valencia, was once a former pirate haven. However, these days, its marine reserve, which spans thousands of hectares, attracts fans of snorkelling and diving. Tabarca Island beach is reached by boat from Alicante or Santa Pola. 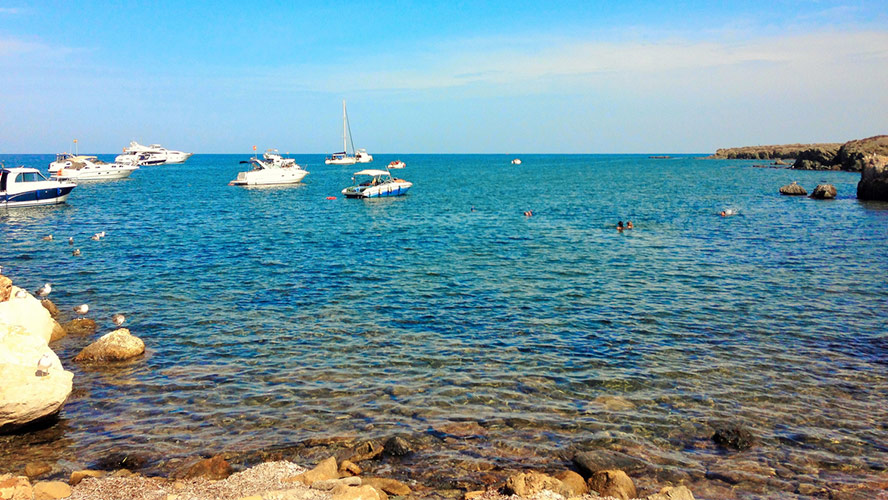 This beach, which spans under a kilometres in length, is situated in Calpe, between La Calalga Beach and Peñón de Ifach. The area boasts a lively seaside promenade and countless leisure and eating options. It’s a perfect beach to visit with children, as there are hardly any waves and the water is not very deep. 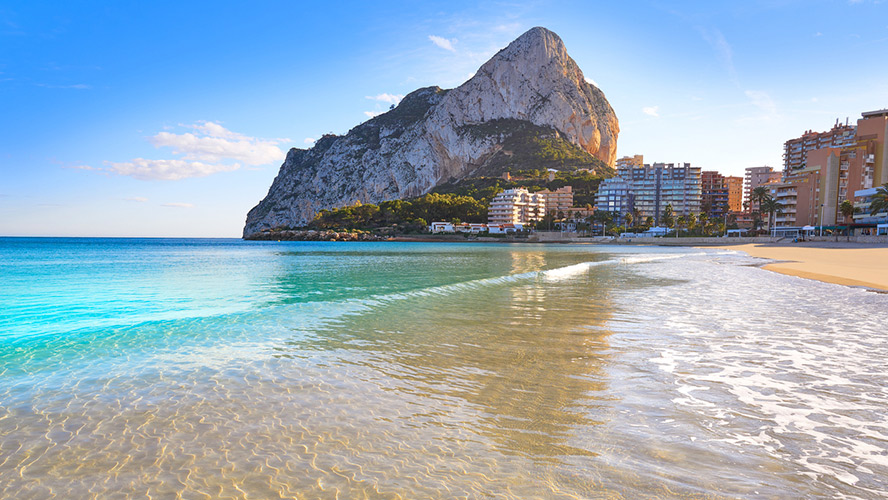 This small 100-metre-long cove is hidden amid the municipality of Villajoyosa or Vila Joiosa. The seabed is lined with pebbles and boasts crystal-clear turquoise water. Access is not signposted and, depending on the day, the waves can get quite strong. To make the most of your trip, we also recommend visiting Bol Nou and L’Esparelló coves, which are also situated in Villajoyosa. 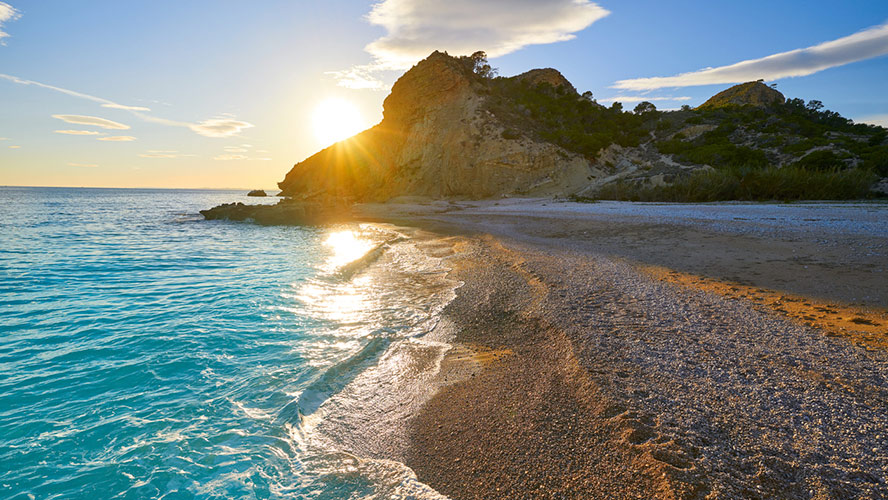 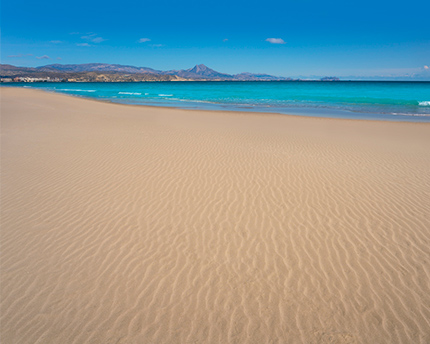 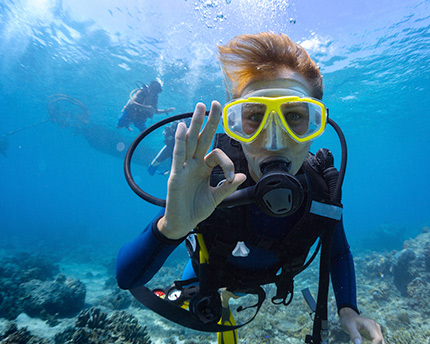