When the 1983 Spanish film Volver a empezar (Begin the Beguine), directed by José Luis Garci, won the Academy Award for Best Foreign Film, many thought the fairy-tale central plaza that appears in the film was staged, but it does in fact exist. Nestled between two hillsides, Cudillero boasts an array of colourful houses that span out from the central Plaza de la Marina. The picturesque village plaza is not the only site worth visiting in the area – clamber up to the 19th century lighthouse that replaced the bonfires fishermen’s wives would light to guide their husbands home; or visit Palacio Quinta Selgas, locally known as the Asturian Versailles.

You’ll fall under Cudillero’s spell as you wander its streets, visit its viewpoints and beaches, and enjoy its cuisine.

What to visit: A delight around every corner

Cudillero offers travellers an abundance of things to see and do. The following itinerary includes some of the most interesting landmarks.

What better way to stretch your legs after a long car ride than by visiting the lighthouse of Cudillero (Faru de Cuideiru)? The 75-m lighthouse stands on the tip of Punta Roballera and was built to replace the antiquated way of guiding fishermen home. Easily accessible, it’ll take no more than 10 minutes to reach. Take the steps from the promenade and walk along a short path.

Once you’ve taken in the views from the lighthouse’s ideal vantage point, head to the old harbour to get a postcard-worthy view of the village and its signature houses. If you are wondering about the history behind the Crayola-coloured town, it’s quite simple: each family painted their home and boat the same colour so they would be easily recognisable from the sea.

Stroll on over to the Plaza de la Marina and enjoy local specialities at any one of the terraces – that is, if you didn’t get caught in what Asturians call a orbayu, a light, fine rain that will soak you to the skin.

Once you’ve recharged your batteries, time to venture into the village. Start in Plaza de San Pedro, housing the Gothic-style San Pedro Church. Then, scale the streets of San Juan and Salsipuedes to Humilladero Chapel to visit the oldest building in town – the small Gothic chapel was consecrated in the 13th century.

You’ll see curadillo hanging from the windows, a local speciality of sun-dried shark that used to be considered poor-man’s food but has since become a hallmark of Cudillero cuisine. 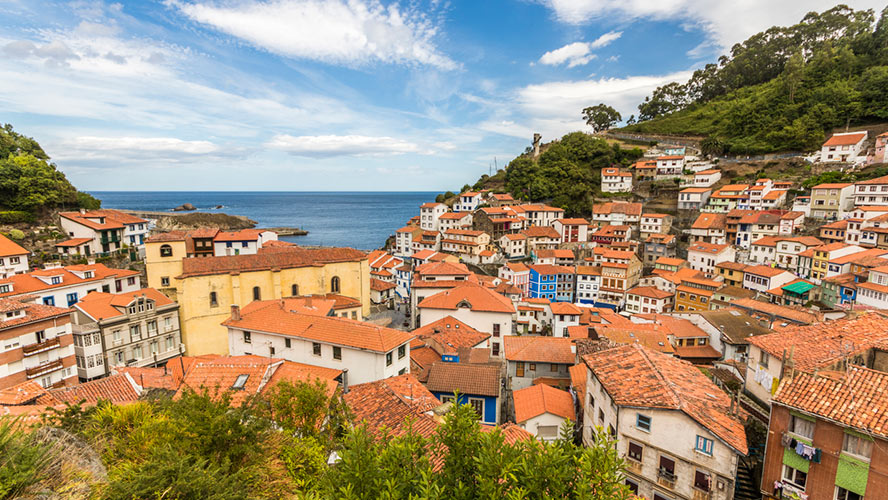 Cudillero from above: Route of the viewpoints

Soak up the spectacular views this small village has to offer from any of the eight different viewpoints. Although Mirador de la Garita is the village’s most famous viewpoint, offering sweeping views of the village and harbour, it is not the only one worth visiting. Why not take in several of the breathtaking views Cudillero has to offer by following one of the viewpoint itineraries?

If you’d like to learn more about these two itineraries, drop by the Local Tourism Office (Puerto del Oeste).

Where to eat: Cudillero’s top restaurants

It goes without saying that northern Spain serves up some of the tastiest dishes, and Cudillero will not disappoint. Feast on ocean-fresh fish and seafood or indulge in local Asturian specialities such as fabes (beans) and cachopo, washed down with a glass (or two) of freshly-poured cider. Wrap up your meal with a succulent dessert. Order tapas or individual plates – either way you’ll enjoy the pleasures of Asturian cuisine. 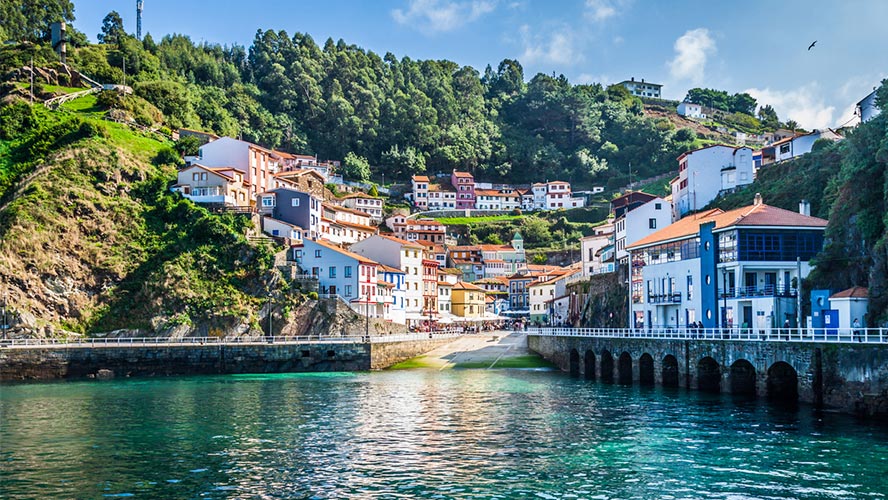 An all-time favourite is Casa Julio (Plaza de la Marina) – a bustling restaurant which serves up authentic Asturian dishes and is renowned for its grilled seafood platter. If you are in the mood for something more secluded, head to the restaurant Mesón El Carbayu, near the Atalaya viewpoint, which also offers authentic local dishes. Be sure to try the cachopo – simply out-of-this-world delicious.

El Silencio Beach, the most beautiful beach of Cudillero

There is nothing finer than going for a dip after a hearty meal. Located less than 15 minutes from the village centre by car, you’ll discover the unspoilt beach of El Silencio, considered to be one of the most beautiful and unique beaches of the Cantabrian coast. How did it earn this reputation?

Surrounded by majestic bluffs and lapped by calm waters, the shell-shaped cove does its name justice as it remains largely uncrowded and quiet. The unique stretch of smooth pebbles lining the beach gives it its uniqueness, while its crystal-clear waters are ideal for snorkelling.

Take the motorway towards Castañeras and follow the signposts to the public car park. The beach is then just a short 10/15-minute walk away.