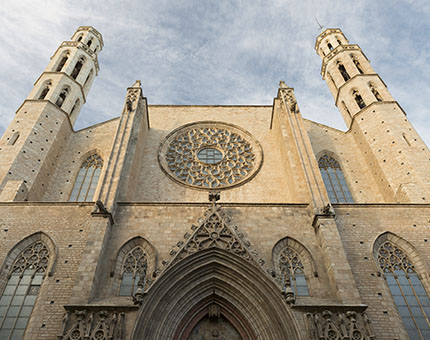 Inevitably, many people immediately associate the basilica of Santa Maria del Mar with the best-selling novel by Ildefonso Falcones—La catedral del mar [The Cathedral of the Sea] (2006)—a work which revolutionised the Spanish publishing industry by raising awareness of the church’s incredible history and, at the same time, strengthening the mistaken belief that the building is really a cathedral. Apart from the work of Falcones (who in 2016 brought out the second part of the novel, Los herederos de la tierra [The Inheritors of the Earth]), the basilica—which is not a cathedral—has also featured in the bestsellers by Carlos Ruiz Zafón (La sombra del viento [The Shadow of the Wind] and El juego del ángel [The Angel’s Game], and even starred in its own television series.

The history of Barcelona’s Cathedral of the Sea

The origins of this elegant place of worship date back to the time when Barcelona was a colony of the Roman Empire. According to history, a few years after the arrival of Christianity in the town, a community of the faithful settled in this area near the sea and built a necropolis in which the martyr Saint Eulalia was buried. She was later to become the patron saint of Barcelona. Therefore, this cemetery could be the site where the chapel of Santa Maria de les Arenes was built. This began as a small building but was gradually extended and, according to the available records, was already known by the seventh century as the parish church of Santa Maria del Mar.

In the thirteenth century, Vilanova del Mar (or what later became known as the Ribera district) witnessed an important development, a boom that encouraged the residents to undertake the construction of a more substantial basilica. In a sense, the citizens of the Ribera neighbourhood wanted a “cathedral” that would feel like their own, because they saw the real Cathedral of Barcelona as a place of worship purely for the city’s elite, and not for the ordinary members of the community. 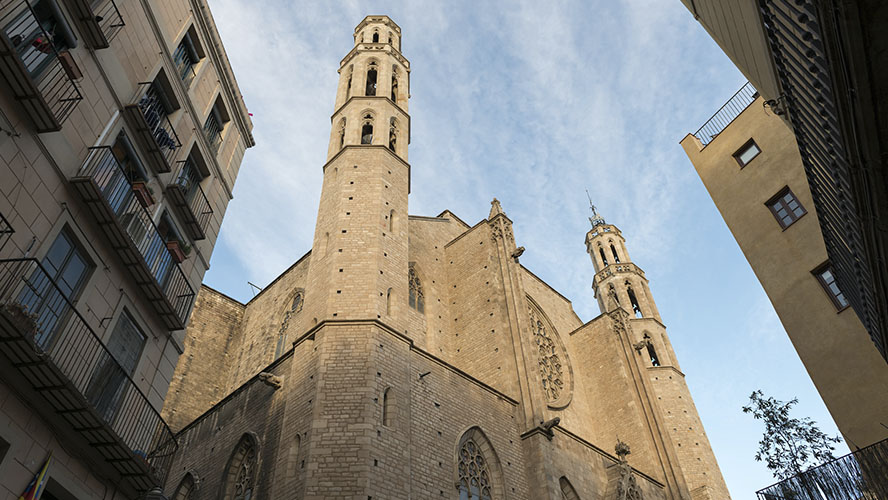 So the cathedral of Santa Maria del Mar was built

To this end, the neighbourhood’s inhabitants poured all their efforts into building the cathedral of Santa Maria del Mar, successfully completing it in only 55 years. In fact, the first stone was laid in 1329 (according to two signs flanking the side entrance that opens onto Carrer de Santa Maria), and the work culminated in the placing of the dome’s final key stone, which is identical to the one found at the foot of the main nave, bearing the shield of the city of Barcelona.

Although this monumental work was overseen by Berenguer de Montagut and Ramon Despuig, the real credit must go to the residents of La Ribera and, in particular, the bastaixos—in other words, those who carried on their own backs the stone from which the basilica was built. The stone had been brought from the royal quarry, located on the Hill of Montjuïc and transported by boat to the vicinity of the church. 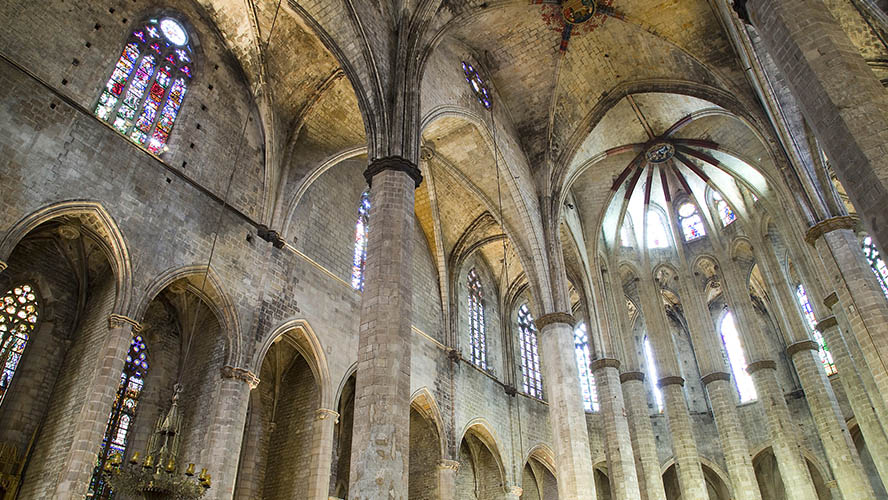 The result of this charming story is a splendid building that always surprises visitors wandering through the narrow streets of the El Born neighbourhood. The lack of space in the Plaça de Santa Maria makes it difficult to fully appreciate the main façade, the most outstanding features of which are a pointed arch crowned with a gable, a colourful rose window (which was reconstructed after the 1428 earthquake, which also caused the deaths of around thirty worshippers) and the unmistakeable towers rising majestically skywards, which enable the church to be recognised from the highest terraces of Catalonia’s capital city.

However, it is what we find when we step inside the main entrance of Santa Maria del Mar that makes this church unique in the world. The interior is staggering, as it instils in the visitor an almost ascensional impression. Its austere walls with their carved-out stained-glass windows, the slenderness of their spans and the decision to give the lateral arches the same height as the central dome, make us feel that we are entering a diaphanous space which provides a vertical connection between the faithful and the divine, earth and heaven.

The sight leaves us with no shadow of a doubt that the efforts of the bastaixos paid off. Lovers of architecture should certainly not leave Barcelona without setting foot inside this amazing basilica.

As this is an old building, it lacks the measures necessary for people of limited mobility to able to access the towers, galleries and roofs. For the same reason, children under 6 years are not allowed to go up to the towers, galleries or roofs. The stated opening times are subject to change because of special events or liturgical ceremonies. 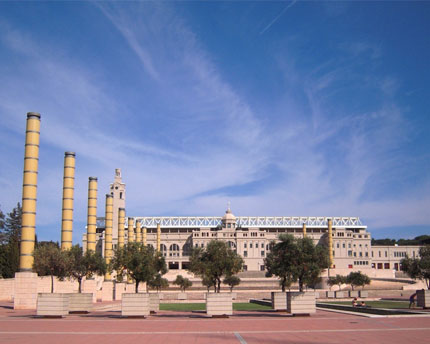