The Temple of the Sacred Heart of Jesus 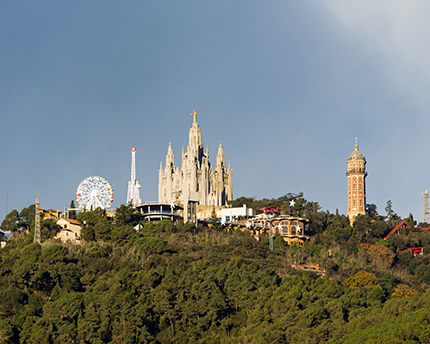 If we were to analyse the ecclesiastical heritage of Barcelona, we would not add the church of Tibidabo to the list of the prettiest churches in the city. And that would not surprise anyone, given that the city boasts constructions as spectacular as the Sagrada Família or Santa Maria del Mar, and charming little churches, such as Església de Sant Felip Neri, located in the heart of the Gothic Quarter, whose façade still shows damage caused by shrapnel during the Spanish Civil War.

However, the Temple Expiatori del Sagrat Cor de Jesús [Temple of the Sacred Heart of Jesus] owes much of its attraction to its privileged location, since it is situated on the summit of Tibidabo, the highest mountain in the Collserola mountain range. Which means its silhouette is clearly recognisable from many of the city streets that have a view of the mountain, while from the temple one can enjoy some of the most beautiful views of the Catalan capital.

The project to build a church in Tibidabo

The idea to erect a Catholic church on the peak of Tibidabo emerged during the end of the nineteenth century, just when construction for the residential urbanisation in this upper area of the city began, following a proposal by the Catalan entrepreneur Salvador Andreu. A few years later, at the beginning of the twentieth century, Avinguda del Tibidabo avenue was opened, and members of Barcelona’s upper class established their elegant residences there; others, however, preferred to settle in the also splendid Passeig de Gràcia.

Plans to construct a Protestant church or a hotel with a casino on the Tibidabo peak encouraged a ‘Board of Catholic Knights’ to buy the land and cede it to the Italian priest John Bosco. At that moment the priest was visiting Barcelona with Dorotea de Chopitea, who would later become a patroness of the temple. 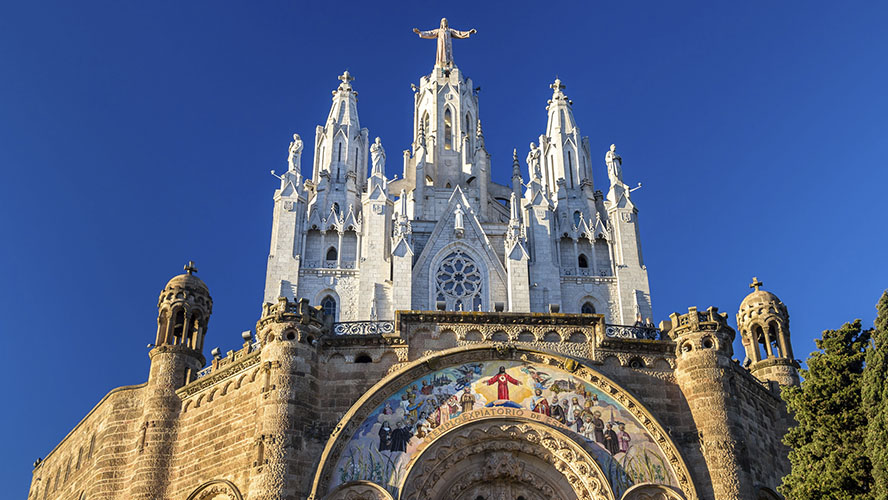 The decision to name the temple Sacred Heart was influenced by the fact that consecration was fashionable at that time, Pope Leo XIII had contributed significantly to its dissemination. This can also be seen in the naming of the Sacro Cuore di Gesù church in Rome, promoted by Bosco himself, and the Sacré-Cœur in Paris, during that same period. In this sense, the connections between the Barcelona temple and the famous Parisian church are not limited exclusively to its name and its elevated position over the city: in 1902, in his speech after the laying of the first stone, Bishop Salvador Casañas i Pagés urged the faithful to contribute by giving alms to the construction of the ‘new Barcelona Montmartre’. 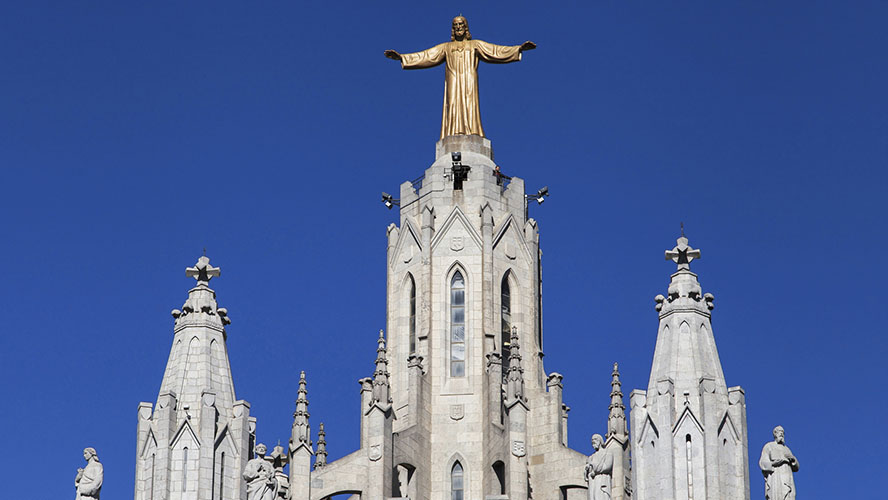 As explained, the erection of the Tibidabo temple (or Temple of the Sacred Heart of Jesus) began in 1902, and the project was assigned to the productive Barcelona architect Enric Sagnier i Villavecchia, who had already authored approximately 300 projects in the Catalan capital, including the Seu de la Caixa de Pensions building on Via Laietana, whose crowning revokes the stylistic language used in the Tibidabo basilica. However, the relay at the front of the building was designed by his son, Josep Maria Sagnier i Vidal, who completed the project in 1961.

It is an atypical edifice because of its surprising mix of styles. In fact, its crypt (which is the first thing that the visitor finds) has Romanesque and Gothic decorative elements, but it is the Neo-Byzantine language that stands out from the rest. The patron saints of Spain, Catalonia and Barcelona—Santiago [Saint James], Sant Jordi [Saint George] and Mare de Déu de la Mercè [The Virgin of Mercy]—are represented in its stone façade. These sculptures are framed by a mosaic made in the Talleres Bru de Barcelona [Barcelona Bru Workshops] in 1955 to replace the original by Daniel Zuloaga, which was destroyed in 1936. 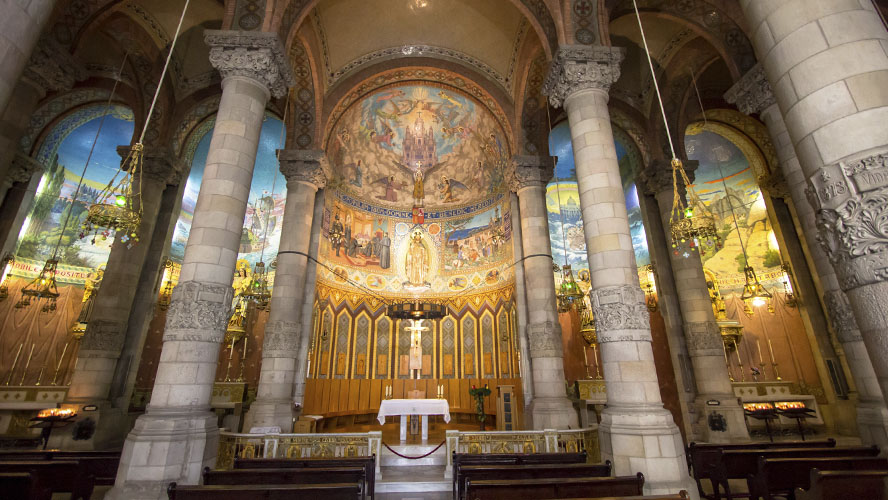 The interior of the crypt also displays a Neo-Byzantine aesthetic, presenting a plant of five naves finished in a semicircular apse, which are demarcated by thick columns and covered with low vaults.

Two staircases surround the crypt which allow us to reach the Basilica of the Sacred Heart. While horizontal lines dominate in the first construction, here the opposite happens: the temple has a square-shaped floor plan and assumes the fundamental precepts of Gothic (Neo-Gothic, in this case), where its verticality is enhanced. This is reinforced by the four towers located in the corners, flanked by the sculptures of the twelve apostles, while above them stands a central tower presided over by the bronze figure of the Sacred Heart, an image that revokes (except in terms of dimensions) the monumental statue of Cristo Redentor (or Christ the Redeemer) in Rio de Janeiro.

The Tibidabo temple interior is rather austere compared to the ornamental profusion of the crypt. However, the show continues on its terraces, since from there the visitor can admire the capital of Catalonia as if it were a painted picture. Instagrammers will have a ball with views of the legendary Tibidabo Amusement Park Ferris wheel, the silhouette of the Sagrada Família and the Torre Agbar tower. And if the weather is behaving, it is worth leaving the cameras aside for a moment to take in the urban layout of the city. The aeroplanes that continually cross the sky of the Catalan capital and the boats that sail the waters of the Mediterranean Sea add beauty to the views. If there is one place to fall in love with Barcelona, it is undoubtedly here.

How to get to the Temple of Tibidabo: