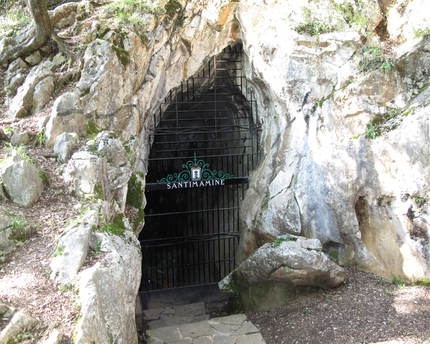 Located on the right bank of the basin of the Urdaibai Nature Reserve in the southern foothills of Ereñozar mountain, the Santimamiñe Cave withholds an extraordinary example of Palaeolithic art within the province of Biscay. Declared a World Heritage Site by UNESCO in 2008, its walls still preserve black drawings depicting animals and magnificent karst formations replete with stalactites and stalagmites. It wasn’t until up to 100 years ago, however, when the curiosity of a group of children revealed the existence of the cave, which since then has been the subject of numerous archaeological excavations. The Santimamiñe Cave, part of the municipality of Kortezubi, has offered 3D virtual guided tours since 2007 to avoid the hastening of its inevitable deterioration.

In the winter of 1916 a group of local children from the Biscay town of Kortezubi discovered a large opening in the rock of the nearby Ereñozar mountain. Without realising, they had stumbled upon a prehistoric cave, hidden amid the thick vegetation of the mountains for more than 14,000 years. Months later, the composer and Vitoria native Jesús Guridi, who was staying at one of the local spas, heard the owner’s son talking about their innocent discovery. A second visit to the cave, during which rock paintings were found in its interior, confirmed the magnificent findings. In just a matter of days, the Biscay Monuments Commission was to take action.

This was just one of the many discoveries of caves with rock paintings that occurred in the first few decades of the twentieth century, perhaps due to the growing custom of using the mountains as a place for leisure and enjoyment. The Santimamiñe Cave was, from 1917, excavated for archaeological purposes by such distinguished people as the Frenchman Henri Breuil, a pioneer in the study of Palaeolithic cave art, and the Basque archaeologists Telesforo de Aranzadi, José Miguel de Barandiarán and Enrique Eguren.

However, in 2006 the cave was closed to the public for the first time in 90 years, owing to the deterioration that the cave was suffering due to the electric lighting system and the presence of people. In total, it is estimated that one million people have been lucky enough to be able to explore this temple of Palaeolithic art since it was discovered more than 100 years ago.

A 3D tour through the essence of the Palaeolithic

But it’s not all bad news. Two years after the cave was closed, the Regional Government of Biscay introduced the option of visiting the first forty metres of the cave. The remaining 325 metres can be explored via a 3D virtual tour installed in the nearby San Mamés hermitage, converted into an interpretation centre for the enjoyment of visitors.

In these first 40 metres that visitors are able to explore on foot is the cave’s entrance, standing at an altitude of 150 metres above sea level, and following on from it a vestibule illuminated by natural light. Here archaeological remains are preserved revealing the presence of cultures dating all the way back from the Magdalenian, approximately 14,000 years ago, to the Romans. However, if you want to see the paintings, you must move slightly further along to the part of the cave known as the sanctuary. This is the point up to which those children came in 1916, observing without understanding the figures—some drawn with charcoal and others inscribed in the stone—which are the cave’s main attraction. In total there are approximately 50, the clearest being the 32 bison, seven goats, six horses, a brown bear and a deer. The rock paintings coexist with stunning calcic formations comprised of stalactites and stalagmites that sometimes form robust columns.