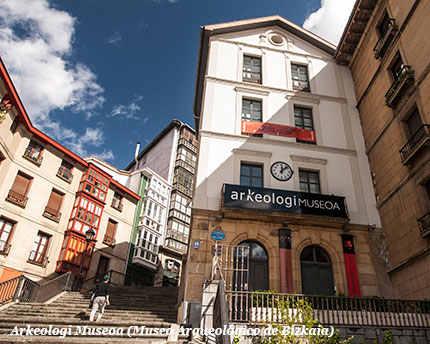 Thanks to its central location and the highly interesting subject matter that it deals with, the Archaeological Museum of Bilbao is a must-visit for all ages. Housed in the former train station that used to connect Bilbao with Lezama, the museum has offered visitors, since 2009, more than 3,000 square metres dedicated to different periods of Basque history. The permanent collection transports visitors from the Basque Palaeolithic to the Modern Age.

From the outside it could easily go unnoticed, but a visit to the capital of Biscay wouldn’t be complete without exploring the five floors that comprise the Archaeological Museum or, at least, some of them. 500 pieces from the Neolithic, the Iron Age, Ancient Rome and the Middle Ages are exhibited in the museum’s permanent collection (made up of some 18,000 pieces). Among them, the oldest date back 75,000 years, originating from Kurtzia/Barrika and Lemoa, precisely from Axlor and the Arlanpe Cave.

At the archaeological site of Forua in Urdaibai, numerous remains were also found that allow one to examine the lifestyles of human beings from around the first to fourth centuries AD. Several everyday utensils, such as pots, dinnerware, keys, axes, iron wedges, coins and other religious objects, serve to contextualise their daily routines. One piece that never fails to grab the attention of visitors is a sculpture representing the goddess Isis Fortuna, which is placed on a domestic altar.

The collection also contains pieces from archaeological sites such as the Santimamiñe Cave, a must-visit for all those interested in prehistoric times, the Basque Museum of Bilbao and the Museum of Sacred Art of Bilbao.

One of the gems of the Archaeological Museum, especially among the little ones, is the Urbieta Wreck, a medieval boat found beneath the mud of the Gernika estuary in 1998. The boat, dating back to the fifteenth century, is unique, as no other similar vessels have ever been discovered. It is 12 metres long and 4 metres wide and has been preserved in a reasonable condition.

The funerary steles also attract the gaze of the curious. Pay attention, above all, to the steles from San Pedro de Elorriaga (first to fourth centuries) and the funerary offerings recovered from the Pico Ramos Cave (Muskiz) with striking votive axes placed alongside the dead.

The latest museum trends have also made their way to the Archaeological Museum, which is equipped with 19 multimedia and 5 audiovisual interactive resources. By using them, visitors can expand their knowledge of the different stages of prehistory and of the exhibited pieces through complementary information including videos and animations.

One of the most interesting resources is the projection that recounts prehistory’s four climatic periods and the changes in landscape, climate, flora, fauna and human beings that occurred depicted on a 4-metre long, curved screen.

Another projection that shouldn’t be missed depicts the funeral rite of a military chief surrounded by his offerings. It is especially interesting as it offers two perspectives of the same finding: that of the archaeologist, who finds the burial as it is (bones and offerings) and also the historical interpretation that arises from said remains (a fighter adorned with his offerings).

In a different part of the museum you can discover, also interactively, the urban evolution of Bilbao ever since it was founded, including various interviews with people from the world of archaeology, who talk about their experiences of the science in question.

A museum with a triple function

The Archaeological Museum of Bilbao doesn’t only focus on raising awareness among visitors, but among its objectives is also the preservation of the prehistoric legacy of the territory, the research and cataloguing of related pieces and their enhancement for the public.

The museum’s services are complemented with a calendar of educational activities including conferences, courses, school workshops, publications and museum guides. We recommend checking the activity programme prior to your visit as many are scheduled for weekends and can be adapted for the general public—without a doubt an interesting option for those travelling to Bilbao with kids.

Other museums in Bilbao

The capital of Biscay tops the list for culture in the north of the Iberian Peninsula. Among the most recommended museums to visit in the city are the Guggenheim Museum, for fans of architecture and contemporary art; the Fine Arts Museum, with an extensive collection of works by Spanish artists; the Maritime Museum, a must-visit to learn about the importance of the Nervión river and the industrial development of the city; and the Basque Museum, which is an ethnographic, historical and archaeological space situated in the former building of the San Andrés Jesuits building.

In the Casco Viejo quarter close to the Archaeological Museum you can also visit other museums such as the Museum of Passages of Easter (situated on Calle Iturribide it is one of the least known museums) and the Museum of Sacred Art of Bilbao (in the Convent of La Encarnación) which boasts an important collection of religious art.