What to see in Almonte, from Rocío to Matalascañas 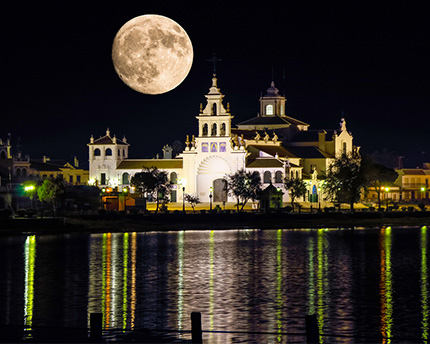 With the largest number of inhabitants and located just 50 kilometres from its capital, Almonte is one of the highlights of Huelva. Some of Huelva’s most interesting tourist attractions are found in Almonte and the surrounding areas. The curious town of El Rocío, where the renowned Marian pilgrimage is celebrated, and the spectacular Matalascañas beach, which is completely surrounded by the Doñana National Park, are just the icing on the cake. This guide will help you organise an enjoyable day in Almonte and ensure you don’t miss out on any of its treasures!

The hermitage attracts a lot of visitors in the town, and make sure you don’t coincide with the pilgrimage, held on the weekend before Whit Monday, if you want to avoid throngs of people. Don’t miss the opportunity to see the statue of Blanca Paloma with its impressive baroque altarpiece inside the hermitage. 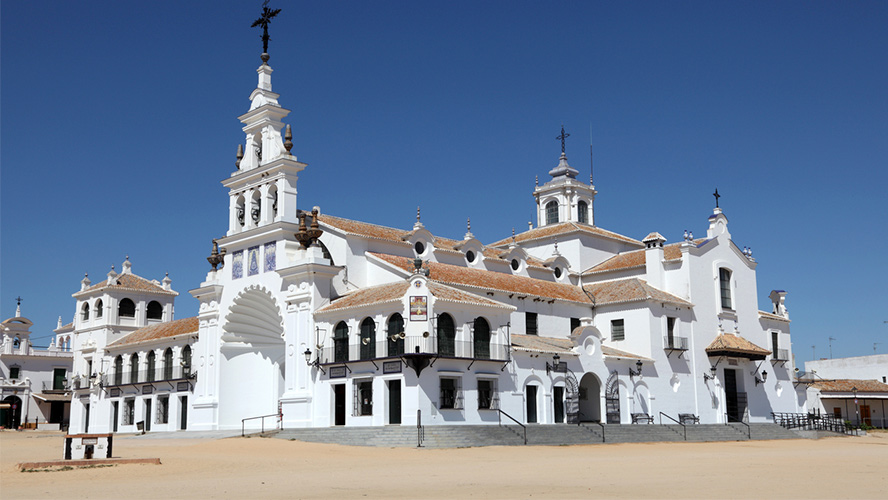 Image of the hermitage of El Rocío

Curiously, the streets of El Rocío are covered in sand.  Walk down the Paseo Marismeño in front of the hermitage with a view of the Doñana National Park. In Plaza del Acebuchal you can marvel at the ancient olive tree that has stood in the square for centuries, while just before the entrance to El Rocío, you will find the Puente del Rey, the bridge which is crossed by the various brotherhoods of El Rocío during the pilgrimage.

In 1992, El Rocío won the title of International Horse Village, as during the pilgrimage it has the highest concentration of horses in the whole of Europe. If you are interested in equestrian activities, this is the perfect place for you. It is also one of the entrance points for the Doñana National Park and an excellent starting point for exploring this wonderful natural area. If you want to sample the local cuisine, let yourself be seduced at Restaurante Toruño.

Doñana National Park gives you an opportunity to immerse yourself in the natural richness surrounding Huelva. It is known for its enormous marshlands that host a large number of waterfowl in winter time.

Doñana National Park is located close to the Strait of Gibraltar, the point where the Atlantic Ocean meets the Mediterranean Sea, which has made it the place of choice for over 300 bird species of both European and African origin. It is the largest ecological reserve in Europe and was declared a UNESCO World Heritage Site in 1994. Most of the park is in the province of Huelva with smaller sections expanding into Seville and Cádiz, which is why Almonte is one of the most popular starting points for visiting this protected area. 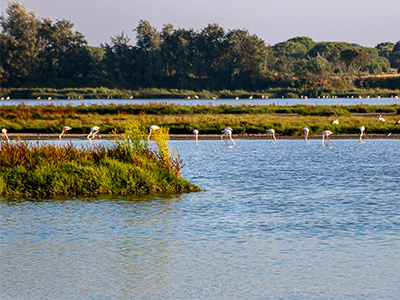 The extraordinary natural wealth of Doñana is created by its stunning flora and fauna. El Acebuche is a wildlife conservation centre has breeding programmes for birds, fish, and reptiles, as well as an important captive breeding program for the Iberian lynx, an endangered feline species.

The best way to find information about Doñana National Park is by visiting one of its interpretation centres, such as El Acebrón or La Rocina. Doñana National park, declared a Biosphere Reserve, includes 35 kilometres of pristine coastline, where you can find so called wandering dunes, so named because they shift faster than other types of dunes. Another characteristic element of the park is its marshlands, which are also its main ecosystem.

There are many hiking trails in Doñana that you can ramble along freely, but don’t forget that you are in a protected area. Visiting Doñana is a good way for children to experience nature. Some of the most interesting trails start from the El Acebuche visitor centre. These include a trail leading to the Acebuche lagoon, where you can observe the different kinds of waterfowl, and another slightly over 3-kilometre walk that takes you to the Huerto and Pajas lagoons. The Raya Real trail, also used by the El Rocío pilgrims, is another popular route.

If you are looking for more excitement, you can go on a 4×4 tour, another preferred activity of visitors. The tours normally last about four hours and there are several companies dedicated to organising trips through the park’s dunes. A different and fun way of experiencing the Doñana National Park.

Matalascañas: the beach of choice on the Costa de la Luz 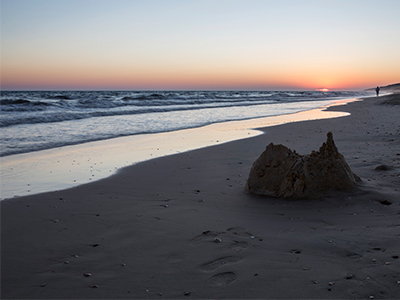 Matalascañas beach is an absolute favourite in Almonte and one of the most popular beaches on the Costa de la Luz. This paradisiacal cove is surrounded by the Doñana National Park.

Matalascañas also boasts an extensive golf course, a long bike path and a wide range of services. It is about 5 kilometres long and its white sand is one of its most notable characteristics. As proof of its supreme quality, Matalascañas has been awarded over 15 consecutive blue flags.

Matalascañas is an ideal beach for families and children will love it. It borders the Doñana beaches, which can be accessed on foot. There is a superb seafront promenade with some parts busier than others. For example, there are normally more people in Torre de la Higuera, while El Coto is quieter.

There are also many restaurants along the way, such as Los Pepes, where you can sample Huelva’s delicious seafood. Matalascañas has everything you need to round off your day in Almonte. Don’t miss the chance to visit Matalascañas, one of the best beaches in the area.

What to see in Almonte 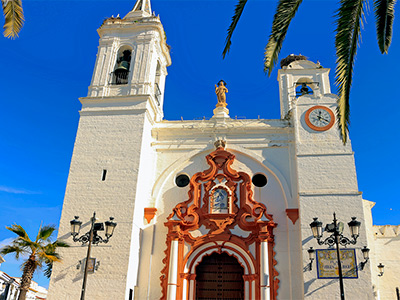 Church of the Assumption

The town of Almonte also has some attractions that are worth visiting and a stroll through its historic centre is highly recommended.

When you visit the church of Nuestra Señora de la Asunción, remember to look out for its Mudéjar-style chapel. Also, don’t forget to visit the Ermita de Santo Cristo, a simple but charming little chapel. Finally, pop into Museo de la Villa, the town’s museum to delve a little deeper into the town’s cultural heritage.

If you want to try some traditional dishes and get a feel of the local atmosphere, visit El Tamborilero, a family restaurant with an open kitchen offering classic dishes from the cuisine of Huelva, such as choco with potatoes.

What to see in the surrounding area 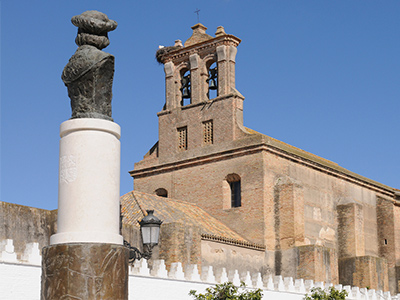 Moguer, located half an hour from Almonte by car, this is possibly one of the most attractive destinations in the area. Moguer was the birthplace of the writer Juan Ramón Jiménez and it is also closely linked to Christopher Columbus and his voyages of discovery. One of his caravels, La Niña, was built here and Columbus visited Moguer on several occasions. The most prominent sights in Moguer include the majestic Monasterio de Santa Clara, the Iglesia de Nuestra Señora de la Granada, the Convento de San Francisco, the birthplace of Nobel Laureate Juan Ramón Jiménez, and the sculptures dedicated to Platero y yo, Jiménez’s most famous publication.

The municipality of Niebla is one of the closest to Almonte, just 20 minutes away by car. This ancient town is located on a hill above the Tinto river and stands out because of the 2-kilometre long wall surrounding it. The wall dates back to the times of Moorish Spain, but remains well preserved to this day. A castle, the Town Hall, the two churches (Iglesia de San Martín and Iglesia de Santa María de la Granada) and a beautiful Roman bridge are some of the most prominent local monuments.

How to get to Almonte 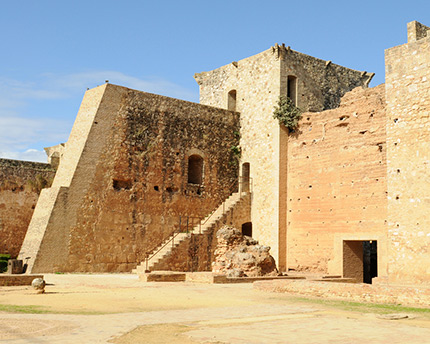 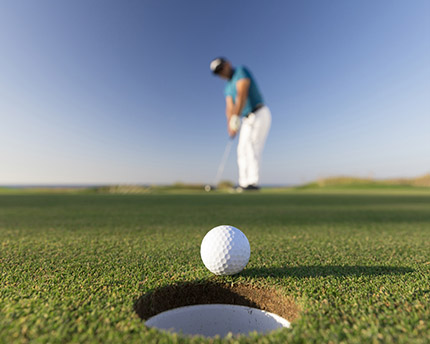 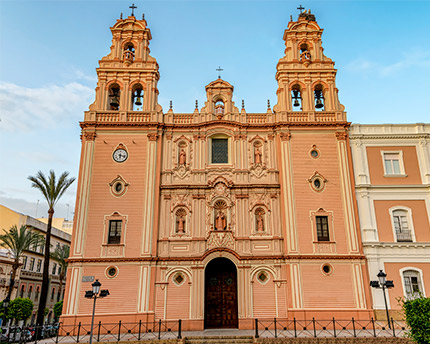