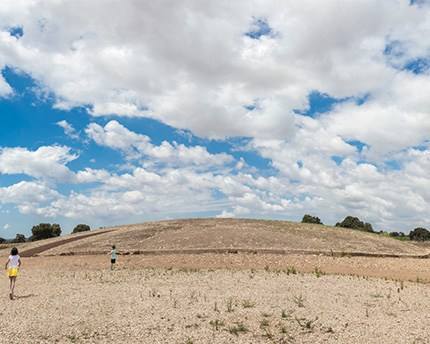 The town of Trigueros is located less than 20 kilometres from the provincial capital Huelva between the Tinto and Odiel rivers. While it has several interesting architectural landmarks to discover, Neolithic enthusiasts will be enthralled by Dolmen de Soto, one of the most impressive structures of the period on the entire Peninsula.

Its grandeur and fascinating engravings never fail to impress. Dolmen de Soto is a must-see if you are travelling in the province of Huelva, a unique opportunity to travel back in time. Read on to find out more about Dolmen the Soto.

Even though over 200 megalithic monuments have been discovered in the province of Huelva, Dolmen de Soto is doubtless one of the most important. It was in the year 1923 when Armando de Soto discovered this peculiar construction on his estate La Lobita. He soon understood that he had discovered something of great value and immediately notified Hugo Obermaier, one of the most prestigious palaeontologists of that time.

Investigation and excavations were initiated in order to uncover the entire dolmen. Dolmen de Soto had two remarkable characteristics: grandiose architecture and several intriguing engravings. Dolmen de Soto was declared a National Monument in 1931, demonstrating that it was considered an important discovery that could be compared to other major findings in southern Spain. Its astonishing state of conservation has enabled various studies to be carried out on it, such as that conducted by the Leisners, a German husband and wife team, in 1943.

Dolmen de Soto, dated between 3000 and 2500 B.C., belongs to a family of dolmens known as long corridor dolmens. The large size of the 21-metre high Dolmen de Soto is one of its most astonishing features. It is the largest dolmen that has been found in the Huelva province. Its width varies depending on the area. Close to the door, it is about 0.8 metres wide, while in the chamber section, it is over three metres wide. 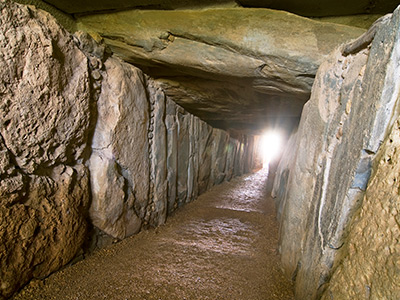 When the sun shines through the structure, a truly breathtaking scene is created. Dolmen de Soto has an east-west orientation, so the sunlight enters the corridor at the equinox and reflects off the walls of the chamber for a few minutes. This rite is based on a religious belief in which the sun is linked to rebirth; the sun was thought to bring the dead back to life.

The reverence of death was a fundamental feature of prehistoric times, which can be detected in this type of architecture, aimed at worshipping ancestors and honouring their memory. In front of the dolmen, there is a circle of stones made up of blocks and standing stones (or menhirs) with a diameter of 60 metres.  It is believed that the place was an enormous shrine in use until the Copper Age.

One of the most impressive features of Dolmen de Soto is the rock art. Most of the vertical blocks and roof slabs are covered in engravings, identified as typical megalithic art from the southern Iberian Peninsula.

The engravings follow a technique that uses incision and abrasion with which paintings with different motifs have been inscribed onto the stone. It is fascinating to contemplate the cosmological vision of the people of that time through these paintings, which represent the world in relation to the sun, the moon and the stars. The various symbols give us an indication of the myths and deities that were worshipped at the time, as well as funeral rites, all of them following a complex iconographic system.

Bowing your head as you enter this prehistoric sanctuary, walking through the corridor and finally reaching the chamber, the heart of Dolmen de Soto, is quite a mind-blowing experience, one that is enjoyable for both children and adults.

Dolmen de Soto has been publicly owned since 1987 and it is managed by the Provincial Delegation of the Ministry of Culture of the Government of Andalusia. The Council of Trigueros is in charge of organising visits to the site. You can find information about the monument at the interpretation and reception centre for visitors, a peculiar underground construction located 50 metres from the entrance to the dolmen. It being hidden means that the area surrounding the dolmen is not altered or disturbed. At the centre, you can find videos explaining everything there is to know about Dolmen de Soto, all the information you need to take full advantage of your visit.

Other things to see in Trigueros

The cultural heritage of the municipality of Trigueros measures up to its main attraction, Dolmen de Soto.  We recommend spending a full day in the town to discover all of its delights.

In Plaza del Carmen you can find one of the town’s most prominent monuments, the beautiful Convento del Carmen, built in the 16th century. The convent is divided into two parts; the old convent, now used as a community centre, and a temple with a statue of Our Lady of Carmel, the patron saint of Trigueros. Close by, you can also find the Ermita de la Misericordia, a temple with whitewashed walls and a façade made of Sevillian tiles.

The Santa Catalina College from the 16th century is also a must-see, especially its beautiful Venetian-style church. The parish church of San Antonio Abad is another outstanding building from the 13th century with its neoclassical façade, Romanesque interior, and magnificent tower.

Roam the streets of Trigueros and stop for a meal in one of its wonderful restaurants, such as Mesón el Bosque, serving delicious grilled meats infused with local flavours.

Just two kilometres away from Trigueros you can find Pilar de la Media Legua, a Roman trough from the second century, located on the old Roman road that linked Seville with Ayamonte.

How to get to Dolmen de Soto:

You can explore Dolmen de Soto independently for free. For guided tours, check the official website for available tour times. Visitors pay a nominal price for guided tours. Guided tours can be booked beforehand for groups of 15 and above. 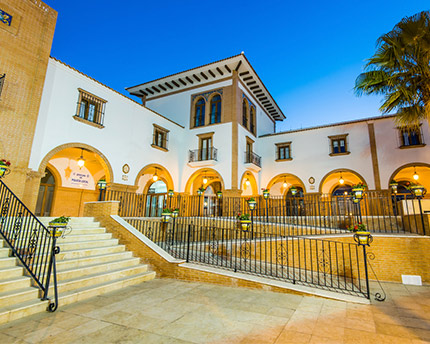 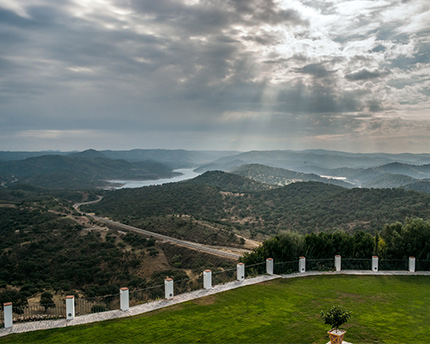