There are places that transcend being mere physical spaces to become icons. Gran Vía, built in phases between 1910 and 1929, is now a living symbol of Madrid, the artery along which, day or night, you can feel most strongly the beating pulse of Spain’s capital city. Its 1,360 metre length is dominated by the iconic silhouettes of buildings such as the Metrópolis and the Carrión, and preserves a century’s worth of Madrid’s dreams and memories. Along its pavements, now wider than when it was originally constructed, have walked film stars, aristocrats, beggars, the general population and, of course, its famous pair of heavies who have graced the street for two decades. The Broadway of Madrid, nowadays with fewer theatres and cinemas and more big-label shops, has had several official and unofficial names that reflect the convulsive history of twentieth-century Spain: Avenida de Rusia, Avenida de los Obuses (Howitzer Alley), Avenida de José Antonio, etc. To the people of Madrid, however, it was always Gran Vía, its official name since 1981.

A brief history of a century-old street

If Madrid is basically a “poblachón manchego” [town of La Mancha] as it was described by the nineteenth-century costumbrista author [a writer interested in local tradition] Mesonero Romanos, then Gran Vía imparted glamour to its labyrinth of common backstreets and alleyways. Since the middle of the nineteenth century, opinion had been growing that an avenue should be constructed to link the centre and the north-west of the city, thereby clearing the congestion around the Puerta del Sol. The first plans however were not approved until 1868. The plan by the architect Carlos Velasco caused such controversy that the same year saw the premiere of a comic opera called La Gran Via—possibly making Gran Vía the first street to have a work dedicated to it before it even came into existence. 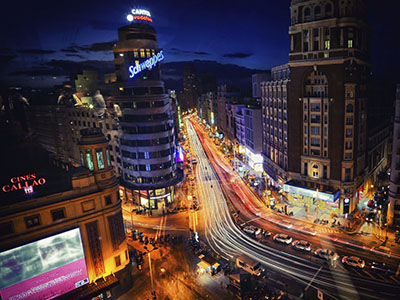 With the death of Velasco, the project which finally got underway was that of the architects López Sallaberry and Octavio Palacios. It was very similar to the previous project, although work did not actually commence until 1910 due to problems caused by opposition from residents and local businesses. On 4 April that year, King Alfonso XIII struck the first blow of the pickaxe against the Casa del Cura in Calle Alcalá, thus initiating works which would go on for two decades and which would require the demolition of 312 houses and over 10 residential streets. The work of the third phase, connecting Plaza de Callao to Plaza de España, was completed in 1929.

Thus began the story of the Madrid street through which modern and mass culture would flow. Gran Vía was the site of Madrid-París (the city’s first department store), and large insurance companies were established here for the thriving middle class. The street was home to a vast array of shop windows for luxury goods, of great cinemas, cafes, etc. Gran Vía’s buzzing daily life always reflected contemporary society. During the Civil War, Gran Vía suffered bombardment by General Franco’s air force (hence its nickname of ‘Howitzer Alley’) but the tourism boom of the 1950s soon filled the street with hotels and dance halls. Gran Vía also absorbed the growing influence of North American pop culture, as seen in American-style cafes such as Nebraska and later, in the 1980s, the legendary record shop Madrid Rock, both of which have now vanished.

In the last two decades, the disappearance of certain venerable cinemas from Gran Vía has made way for the growing offer of musicals and other theatrical extravaganzas which have led some to describe the street as the ‘Broadway of Madrid’, a reference to the prestigious New York avenue. The Teatro Lope de Vega, which opened in 1949, has become an international flagship of the genre, premiering great productions such as Beauty and the Beast, Jesus Christ Superstar, Les Miserables and the incomparable Lion King, which has now been running for eight years. The renamed Teatro EDP Gran Vía (which for over half a century housed the Gran Vía cinemas) was also converted in 2004 to a venue staging musicals, concerts, dance, ballet, comedy and other shows. Other famous cinemas which were converted include the Teatro Rialto which opened in 1930 as the Cine Astoria, and the Teatro Coliseum, which opened in 1932 and was used as a military store during the Civil War.

It is still possible however to enjoy films on Gran Vía, in cinemas such as the Art Deco-styled Cines Callao (1926) or the Cine Capitol (1933), through which have passed (over many decades) a long procession of Hollywood stars—and which still frequently host premieres. It is worth adding that this street’s glamorous cinematographic atmosphere has also led to films being shot here which have left an indelible mark on popular culture. Who could fail to be impressed by the sight of Eduardo Noriega walking through a deserted Gran Vía in the memorable sequence of Abre los ojos [Open your Eyes] (1997)? Can there be anyone who will not always associate its picturesque statues with the frenetic scenes at the end of La Comunidad [Common Wealth] (2000), or the famous Schweppes neon sign with Santiago Segura and Álex Angulo hanging from it in El día de la bestia [The Day of the Beast] (1995)?

Finally, we have the Casino Gran Vía, of interest to gamblers and non-gamblers alike. This luxurious three-floor complex opened in 2013 in the former headquarters of Madrid’s Chamber of Commerce and Industry, an Art Deco mansion which also boasts a restaurant, champagne bar, cocktail bar, lounge and outdoor terrace with spectacular views of Gran Vía.

The popular expression “De Madrid al cielo” [Madrid is the next thing to heaven] acquires special significance when you stroll along the Gran Vía. More than one visitor has ended up with a stiff neck through looking at the street’s most iconic sights: the imposing silhouettes of its noble edifices, standing out against the invariably brilliant blue sky of the capital. The site of Madrid’s first skyscrapers, Gran Vía reflects (along its three sections, built over two decades) the development of architectural trends over that period.

In the first and most aristocratic stage to be constructed, linking Calle Alcalá with the Red de San Luis, the most outstanding building is the Metrópolis edifice (1911), the street’s letter of presentation. Like many others in this section, this building (once the headquarters of the La Unión y el Fénix insurance company with its famous winged statue) is French neo-Renaissance in style. It is also worth mentioning the eclectic Edificio Grassy (1916), whose address is Number 1 Gran Vía, and the beautiful Hotel de las Letras (1917), originally built as a residential building for the Count of Artaza. On the ground floor of Number 12 Gran Vía, the renowned cocktail bar patronised by the Madrid and international jet set, Bar Chicote, opened in 1932.

In the later, second section of Gran Vía, the French influence still rubs shoulders with the North American-style inspired by the famous Chicago School. This is also the case with the Edificio Telefónica (1930), Spain’s first skyscraper, and with the tallest building in Madrid, the Edificio España which opened in 1953 and the Casa Matesanz (1923). Another historical building is the Edificio Madrid-París (1924), the Parisian-style edifice that was home to the capital’s first department store. Despite the building’s multiple changes of use during the 20th century, its top floor has always been at the heart of Spain’s radio service—Unión Radio, which is now Cadena SER, has broadcast from here since 1925. Along this section also stands the Palacio de la Música (1926) and the Palacio de la Prensa (1924).

Along the final section, we find Gran Vía in its most modern ‘pop’ incarnation, with buildings in the Rationalist, Expressionist and Art Deco styles (including almost all the former theatres and cinemas mentioned earlier). The most outstanding is the Edificio Carrión (1933), one of the symbols of the Gran Vía, which houses the Capitol Cinemas and is easily recognised by its famous Schweppes neon advertising sign.

Shopping in the Gran Vía, an open-air experience 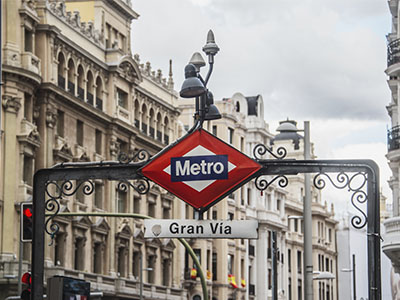 As a tourist attraction bringing in 10 million people annually, Gran Vía offers a vast choice for those who wish to go shopping. In recent years, the large multinationals have triumphed in the battle against the more traditional businesses. It is only along the first stretch of the street, historically dedicated to luxury stores that a few artisan businesses remain, such as the Grassy and Sanz jewellers. This area is also the location of the exclusive Loewe store.

The most heavily populated stretch of Gran Vía lies between the Red de San Luis and Plaza de España, with its many major fashion brands (such as Bershka, Stradivarius, Cortefiel, H&M and Zara) offers options to suit all budgets. The former Madrid-París department store now houses the low-cost-clothing company Primark megastore, the opening of which in 2015 caused a furore on Gran Vía. The street also boasts the official shops of Real Madrid and Atlético Madrid, the city’s main football teams, as well as the historic Casa del Libro which has, since 1923, been an essential item on the itinerary of lovers of literature and learning.

As Gran Vía knows only too well, times change. The movement of recent years in favour of less polluted cities which are more accessible to pedestrians have finally changed the face of the most famous street in Madrid, which has been semi-pedestrianised since November 2018. After only eight months of work, the City Council projects led by the Mayoress Manuela Carmena have transformed the Gran Vía, removing one traffic lane, and adding 6,800 m² of new pavements, along with trees, drinking-water fountains and new benches. The latest, but not the last, phase in the hundred-year history of the street whose layout is engraved on the hearts of the people Madrid.

How to arrive to Gran Vía 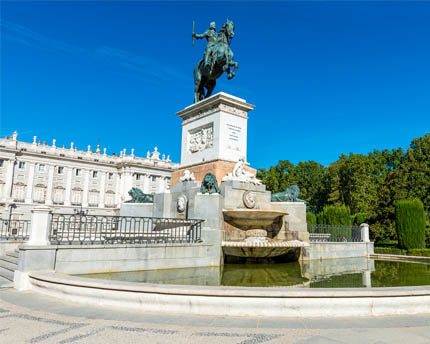 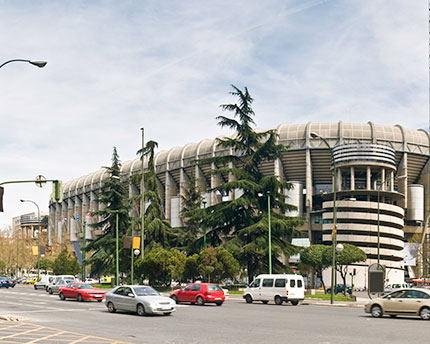 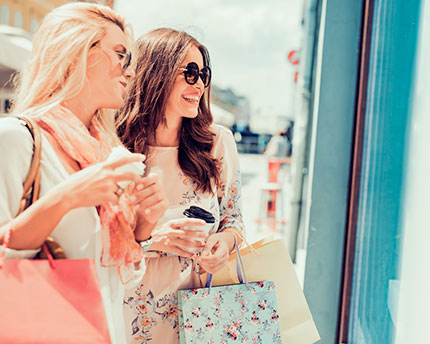