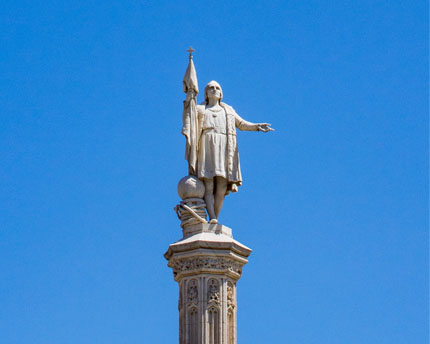 The Plaza Colón is where some of the capital’s main thoroughfares meet, most importantly the Paseo de Recoletos and the Paseo de la Castellana. It is home to an important cultural institution, the theatre of Fernán Gómez Centro Cultural de la Villa, which also houses exhibition halls.

Here you’ll find one of the city’s most memorable gastronomic spaces, Platea, located in the old Carlos III cinema. Architecturally speaking, the square is especially notable for the twin towers of the Torres de Colón (Columbus towers), built in the seventies and designed by the architect Antonio Lamela, the Jardines del Descubrimiento (Gardens of the Discovery), and the monument to Christopher Columbus, designed in the Neo-Gothic style by Arturo Mélida at the end of the nineteenth century.

The statue of Columbus watches over the square

The monument to Columbus stands 17 metres high in the centre of a round fountain that works as a roundabout, in the middle of the roads that cut through the Plaza de Colón. It was moved here from its original location (on one side of the Jardines del Descubrimiento) in 2009. The statue of the first European to set foot in the Americas has become a means of controlling the traffic that passes from the north to the south of the city, and vice-versa.

It stands in the middle of one of Madrid’s most important roads and serves as the link between the Paseo de Recoletos and Paseo de la Castellana. The monument was first erected between 1881 and 1885, although its official inauguration was delayed until the 12 October 1892 to coincide with celebrations of the 4th centenary of the European discovery of the Americas, organised by the City Council. 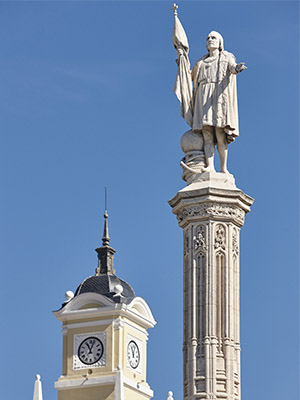 The Torres de Colón, visible from many points of the city, have been an iconic part of Madrid’s skyline since the seventies. Antonio Lamela’s original design has been modified several times to look how it does today. The main change has been the addition of the Art Deco green canopy in the shape of an enormous plug that crowns the two buildings, and from which hangs a fire escape that has united the two towers, which were originally designed as two separate buildings.

For a long time, the structure was known as the Torres de Jerez, being the property, at that point, of the Rumasa group, run by the infamous José María Ruiz Mateos. Below the towers, you can catch an amazing show in the form of the skaters that meet every day to show off their skills, especially at sunset.

The Fernán Gómez Theatre and its focus on modern culture

The Centro Cultural de la Villa, better known as the Fernán Gómez Theatre, takes up a large part of the surface area of the Plaza de Colón. The centre adopted its current name in 2007 after the death of the great actor, author and filmmaker, Fernando Fernán Gómez.

This institution’s focus on cutting-edge culture and innovative theatrical representations based on classic and modern texts is an important one. It also promotes activities to do with reading, educational activities, exhibitions of photography and other forms of art, and musical spectacles. You might be interested to know that vigils were held in the main hall of this theatre, which has capacity for 682 people, after the deaths of the artists Lola Flores, Rocío Jurado and Tony Leblanc.

Standing on the theatre itself and breathing life and warmth into one end of the square throughout 2019, Julia is an enormous sculpture representing a girl’s face with her eyes closed, the work of Jaume Plensa, with the patronage of the Fundación Maria Cristina Masaveu Paterson (FMCMP). 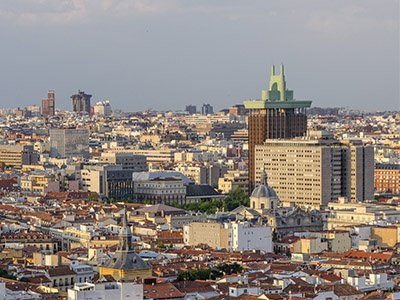 Platea, a gastronomic space of the highest calibre

On the opposite side of the Plaza de Colón you’ll find Platea, a kind of gastronomic ‘shopping centre’ with a wide selection of restaurants distributed around what was once the seating area and stage of the Carlos III cinema.

Today, in this attractive space, shows are put on that liven up the culinary experience, as if it wasn’t already interesting enough. There’s a huge variety of options, from the bar of La Vermutería, where you can sample dozens of varieties of vermouth accompanied by classic or more creative appetisers, to the restaurant of Canalla Bistró, a daring venture by the Valencian chef Ricard Camarena, where flavours, ingredients and culinary techniques from all four corners of the planet are fused together.

After dinner, you can hang around for a few cocktails in style to the soundtrack of El Palco’s excellent music. El Palco occupies the uppermost section of this enormous space.

The country’s most important library

The Biblioteca Nacional building, the national library, sits just where the Plaza de Colón meets the Paseo de Recoletos, with an imposing staircase flanked by marble statues of some of Spain’s most important classic literary figures.

Although access is restricted to professionals and researchers, the library organises guided tours from Monday to Friday, if you book in advance. You can also visit the museum, and exhibitions are organised periodically that are related to authors and the world of the book in general.

This institution, which is, without doubt, the country’s most important library, shares a building with the National Archeological Museum, the entrance to which is on Calle de Serrano. This museum is home to what are probably the country’s most important pre-Roman masterpieces (the Lady of Baza and the Lady of Elche), and various sculptures from the Classical Period, as well as treasures from the Visigoth Period, amongst many other significant relics from the past.

The next big project for the Plaza de Colón

There is as of yet no date set for its inauguration, but the square’s next architectural landmark is already under construction. The Barclays building is being remodelled, and will become Axis. It’s a transparent structure based on glass and steel designed by none other than the British architect Norman Foster, winner of the Prince of Asturias Award for the Arts and the Pritzker Architecture Prize.

In the Plaza de Colón, next to the Jardines del Descubrimiento, where giant blocks of granite tell the story of the exploration and conquest of America, an enormous Spanish flag was installed in 2001. It measures no less than 14×21 metres, or 294 m2, and hangs from a white pole that’s 50 metres high.

The flag itself weighs 35 kilos and the pole 20 tonnes. Interestingly, the pole turns according to the direction of the wind, which prevents the flag from getting tangled up. It is, without doubt, not just the biggest Spanish flag in the whole city, but in the whole country. 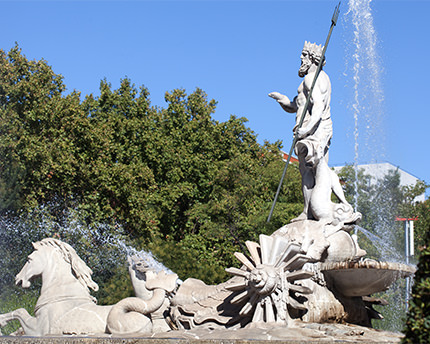 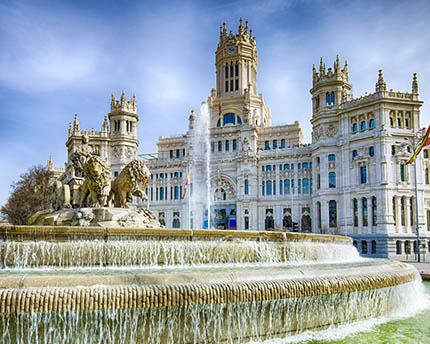