Barcelo.com Barceló Experiences Spain Valencia What to see and do 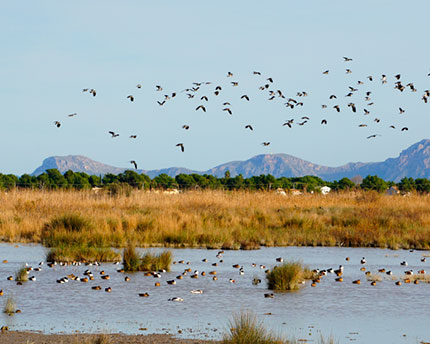 In the L’Albufera Natural Park, just 10 kilometres from the city of Valencia, you’ll find what’s considered to be Spain’s largest natural lake. It’s also one of the protected spaces with the most diverse ecology thanks to its marshy habitat covered in paddy fields and the fact that it’s visited by a multitude of different bird species during the year. Formed 1.8 million years ago during the Pleistocene era, in more recent times the Romans baptized this enormous coastal lagoon as Nacarum Stagnum [Mother-of-Pearl Lake], thanks to the iridescent reflections that appear in it at sunset. However, it would be the Moors of al-Ándalus, who dominated the Levante area during the Late Middle Ages, who would give it its definitive name: al-buhayra, which means ‘small sea’ in English.

Every year, L’Albufera de València is visited by more than 200,000 people, attracted by the beauty of its landscapes of reeds and mud, the wide range of leisure activities on offer, and the rice-based cuisine that’s been perfected in the numerous villages here over the centuries. This is a haven of peace, history and nature, just a hop, skip and a jump from the capital of Valencia. We’d love to show you around, just follow us. Let the journey begin!

A quick lesson about the L’Albufera Natural Park

As we were saying, the area that is currently the L’Albufera Natural Park formed thousands of years ago, when a bay between the mouths of the rivers of Túria and Júcar was separated from the Mediterranean Sea thanks to the natural creation of a sand bar. Later, L’Albufera would be exploited for hunting, and then for the cultivation of rice, which is still a pillar of the area today. So, the main natural habitats in the area have been created with man’s help. Today, they are the main focuses of any self-respecting visit to the park.

What to do: bike rides, boat trips and bird watching

Now we have a bit of an idea about what the L’Albufera de València is, the next thing we need to focus on is how to visit it. Despite this not being true of other areas of unspoilt nature, L’Albufera is very close to the city, making it very easy to access. Although it boasts a series of marked paths open to the public (both walkers and cyclists), the smartest option might be paying a visit to the Racó de L’Olla Visitors Centre, and getting all the information there, first-hand. It’s located in the transition zone between the Devesa and the lagoon, and it’s easy to find, on the side of the CV-500 road, halfway between the villages of El Saler and El Palmar. 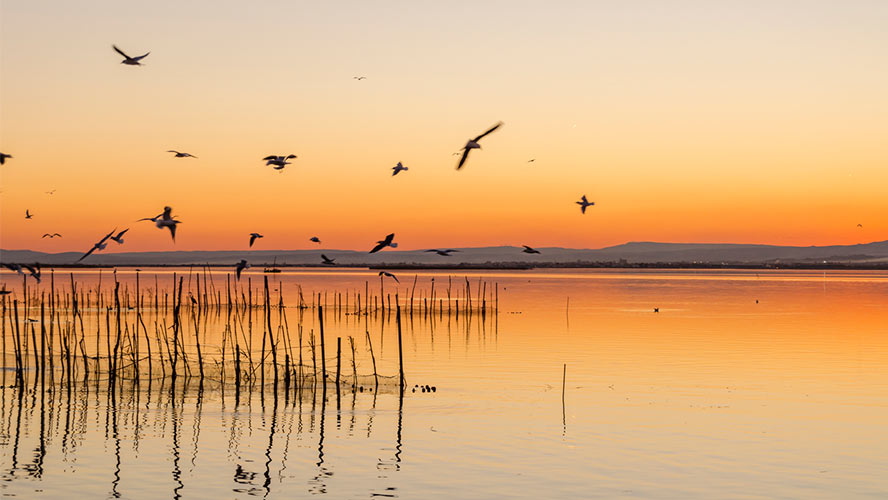 A footpath starts at the centre (the ruta roja or red route), which will lead you through an excellent example of Mediterranean forest to a tower-viewpoint with impressive panoramic views of the lagoon. This is only one of the many spots recommended for bird watching in the Park, along with the Tancat de la Ratlla or the Mirador del Pujol, to name just a few. And if you still want to explore other paths, you’ll find four more, officially marked with different colours. For example, the ruta verde (green route) takes you through the paddy fields and the irrigation channels that traverse them, focusing on traditional ways of life in the area. On the other hand, the ruta azul (blue route) leaves from the village of Catarroja and is your gateway to discovering the traditional processes of construction and repair of the typical crafts used in the lagoon: albuferencs.

Whilst we’re on the subject of boats, the L’Albufera National Park has six different marked municipal jetties in different villages in the area—the ones at El Saler and El Palmar are the most popular. They’re used for boat trips every day. Guided by locals, you can get up close to the shores of the lake and contemplate the birdlife. Costing between 4 and 5 euros and lasting about 40 minutes, these trips are a fantastic opportunity for letting yourself be swept away by the charms of L’Albufera. The best part is, you don’t need to book in advance. 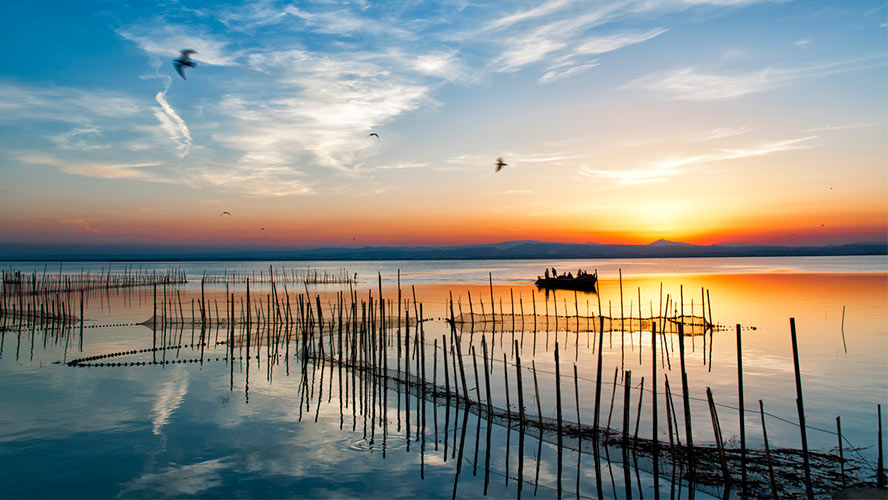 Eating and sleeping in L’Albufera

On top of all the activities that you can do in the area, we need to mention the charm of the numerous villages here, perfect both for somewhere to rest your head, and for sampling unique cuisine. It’s here, behind the infinite paddy fields that ring the edge of the lagoon, that you’ll find the best-kept secret hiding: the origin of Valencian cuisine and, specifically, its famous paella. This dish is as well known by foreigners as it is by Spaniards, and the origins of its name are curious. According to locals, in the past, the men here used to occasionally stand at the stove whilst women went to pray together, resulting in a rice dish “pa´-ella”, or “for her”. Whether that’s true or not, you can’t leave L’Albufera without trying a paella made by one of the local chefs.

If we had to choose just one then the Bon Aire restaurant, in El Palmar, serves surprising rice dishes, with ingredients that come straight from the vegetable patch. Their Valencian paella with chicken and rabbit, their vegetable and snail paella, their duck paella and their black rice paella are just some of the types available depending on the time of year. And if you’ve got any room left, all i pebre (eel, potatoes, garlic and pepper) or clòtxines (mussels) are the icing on the cake of any lunch in L’Albufera.