Prague Lego Museum, the largest showcase for the ‘toy of the twentieth century’ 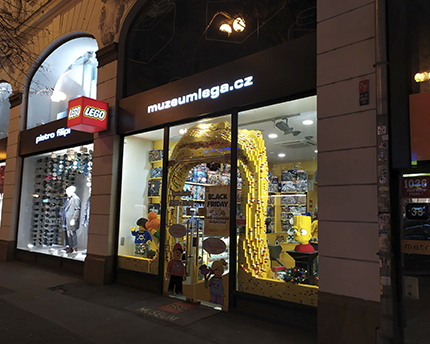 Since it opened in 2011, the Prague Lego Museum—located halfway between Charles Bridge and Wenceslas Square—has established itself as a paradise for fans of this popular Danish construction toy. Recognised as the largest Lego museum in the world, not even the company headquarters in the Danish city of Billund has succeeded in matching its size. With a surface area close to 1,000 m2, the museum space lets visitors discover the history of this popular toy while they admire around 9,000 unique models—some themed and others historical—built using 1.5 million bricks.

The museum visit can easily be completed in an hour, although if you head to the specially allocated space for creating your own models, you might well spend longer there. A surprising statistic revealed that, taking into account the total number of Lego bricks that exist in the world, there are an average of 62 bricks for every person on Earth. Perhaps yours are waiting for you in Prague. Are you ready?

Discover the history of Lego

One of the big attractions of the Lego Museum—Muzeum Lega, in Czech—is the chance to discover the history of the Danish toy in a fun and dynamic way. According to the posters that decorate the space, Lego’s origins can be traced back to the beginning of the twentieth century when the Christiansens, a family of carpenters, decided to transform their old wood business into a toy manufacturing company.

However, it wasn’t until the 1940s that the head of the Christiansen family decided to make the move from wood to plastic and use the eye-catching colours that their Dutch neighbour, avant-garde painter Piet Mondrian, used in his compositions.

To the surprise of many, the name Lego actually has a meaning: “play well” in Danish. And it’s clear that the original aims of its creators have been fulfilled because today, over a hundred years later, its little bricks are affectionately known as the ‘toy of the twentieth century’.

In turn, the Prague Lego Museum was created in 2011 on the initiative of a Czech businessman who had collected dozens and dozens of models in his own home and finally decided to open a space where he could house and display them to the public. Since then the figures speak volumes of the museum’s success: 80,000 visitors a year and a collection of exclusive models that continues to grow.

A journey through the Prague Lego Museum

The museum entrance is reached through the Lego shop, which has a wide selection of models on sale that cannot be found anywhere else in the world.

With around 9,000 models spread across three floors, the museum lets visitors admire the oldest Legos, known as Lego Systems, and the most recent additions. The space is also organised into 20 themed areas that lovingly and accurately recreate hits from the world of film and literature, such as Harry Potter, Indiana Jones, Batman and Star Wars.

Despite the fact that children are its natural audience, adults also find their own space with emblematic series such as ‘Lego Technik’, based on vehicles of every kind that have impressively sophisticated mechanics. The smallest visitors will also enjoy ‘Lego Duplo’, a series specifically designed for children who are 1 1/2 and over. In fact, a kids’ room called the Children’s Corner lets them spend time creating their own models.

However, the biggest attraction of the museum is its huge collection of model buildings and monuments of Prague. The most famous is the model of Charles Bridge, which for many years was the biggest Lego model in the world. Other highlights include impressive reproductions of the National Museum, the Astronomical Clock, Karlštejn Castle, and St Vitus Cathedral—the latter was built using around 400,000 bricks. You’ll also find jewels of international architecture such as the India’s Taj Mahal, London’s Tower Bridge and Paris’ Eiffel Tower.

A second museum in Kutná Hora

The Prague museum has been so successful that the brand recently decided to open a second museum in the nearby mining town of Kutná Hora. Despite being significantly smaller than its sibling in Prague, this museum still has over 1,000 original Lego models and some make clear references to its location. The most famous example is the reproduction of the Sedlec Ossuary which is just a few kilometres away.

If you weren’t already aware, the historic centre of Kutná Hora has been declared a UNESCO World Heritage Site so it is definitely worth paying a visit.

How to reach the Prague Lego Museum