Known for being open-minded and tolerant, Sitges is the perfect city for an escape from Barcelona. Its proximity to the Catalan capital (35 kilometres to the south) turns it into the perfect escape for both residents of Barcelona and visitors. It’s the perfect place to enjoy the beach and soak up the atmosphere on the terraces, leaving the stresses of the big city behind. Part of its popularity lies in its well-known tolerance of LGBT communities, which makes it a popular choice for members all year round, but above all during the famous film festival, Carnival and the Gay Pride fiestas.

Sitges is located on the Costa del Garraf, which means it enjoys a temperate climate thanks to the Mediterranean and the proximity of the mountains, which block cold winds from blowing in from the north. The locals claim that it has its own microclimate because the weather here isn’t always the same as it is in Barcelona. There are three different highlights to visit to Sitges, so you can choose whichever suits you best or sample a little bit of each: the beaches, the historical centre, and the food.

The beaches of Sitges

This town is one of the most well-known on the Catalan coast, with four kilometres of beaches of fine, golden sand that can be enjoyed all year round. Some of these coves have been awarded the distinctive ‘Blue Flag’, which certifies the quality of the water and the facilities for beach-goers. Some of them are perfect for families, as the water is calm and relatively shallow. Anyone looking for a more private corner for nudism will also find what they’re looking for.

Out of the 12 beaches in the central zone, the most recommendable are Balmins, Anquines and Barra. The first is made up of three coves and is mainly a nudist beach. The second is an artificial cove in front of the Terramar hotel that was created in the twenties for the guests to us. Barra beach is also worth a visit, 400 m long with four artificial islands. On almost all of the beaches here you can rent pedal boats and kayaks. On the beaches of Balmins and Sant Sebastiá there are even showers that are operated by a card you can ask for in the beach bars. Sant Sebastiá has been mentioned in the New York Times as one of the world’s best urban beaches. 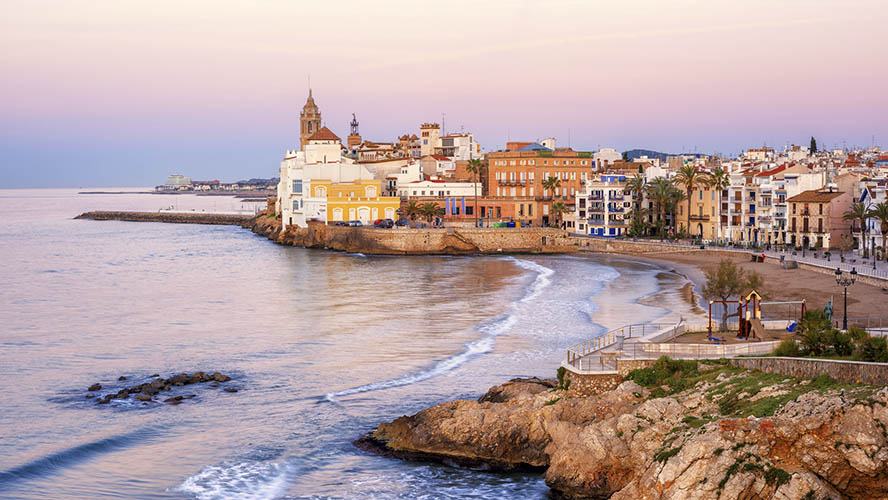 Out of the four beaches in the Levante area, the Platja de Les Botigues stands out. It’s the largest and has six beach bars. If you visit Garraf beach, you’ll be able to spot a few colourful bathing huts, declared to be of cultural interest. Last but not least, in the Poniente zone there are two beautiful naturist beaches that it’s tricky to get to: Desenrocada and Home Morot (drawing a largely gay crowd). Both of them have sun loungers and beach bars.

If as well as enjoying a relaxed day on the beach you want to get the adrenaline pumping then there are lots of different companies organising activities for thrill-seekers. Choose between climbing, caving, hiking and, of course, water sports.

What to see in Sitges

When visiting Sitges, you’re probably most keen to see the attractions in the centre of the village, rather than touring its luxury housing developments or its golf courses. For that reason, we’ve selected some of the spots that you’ll find in the historic centre. Don’t be afraid to get lost, as that’s the only way to discover the most unique corners of this ancient fishing village that, today, attracts so many tourists. Start your walk by heading for Casa Bacardí, a modernist building where you can find out all about the family famous for their involvement in the rum trade. 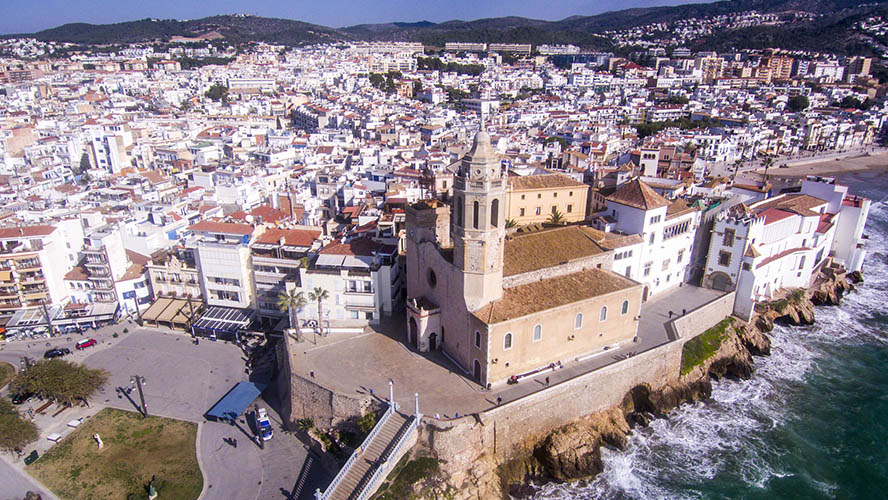 Continue your walk to visit the churches of Sant Bartomeu and Santa Tecla and the Palau de Maricel, where several eye-catching Baroque, Renaissance and medieval pieces are on display, as well as the neo-gothic building of the Casa de la Vila. Visit the Museu Maricel to see its wide selection of Roman, Gothic and Modern Art artefacts. And to find out more about Catalan social evolution, you can visit the Museu Romàntic Can Llopis [Can Llopis Romanticism Museum]. If you’re an art fan, you can’t miss the Museu del Cau Ferrat located in the home and workshop of the writer and painter, Santiago Rusiñol.

Where to eat in Sitges

Sitges is a great place for sampling traditional Catalan recipes and enjoying spots with sea views. Don’t think twice about ordering the arròs a la sitgetana (a rice dish with seafood and meat), cuttlefish with potatoes and aioli, and the xató, which is similar to a salad with endives, anchovies, cod, tuna, olives and romesco sauce. If you’re a fan of markets, then pay Sitges’ market a visit and see the area’s produce for yourself. When it comes to wine, try anything from Penedès, Alella or Pla de Bages.

There are plenty of restaurants, terraces and beach bars where you can eat well no matter what your budget. One suggestion is El Cable, a classic tapas bar that services up food with authentic local flavours. If you fancy Italian food, try the Pizzeria Cap de la Vila, which opened in the sixties. It’s said to be Spain’s first pizzeria. If you’re a fish or seafood person, then you’ll want to visit Can Laury Peix in the port area. Lastly, a good choice if you’re looking for exotic flavours is Yatai, where you can enjoy the delicious sushi and yakisoba noodles. 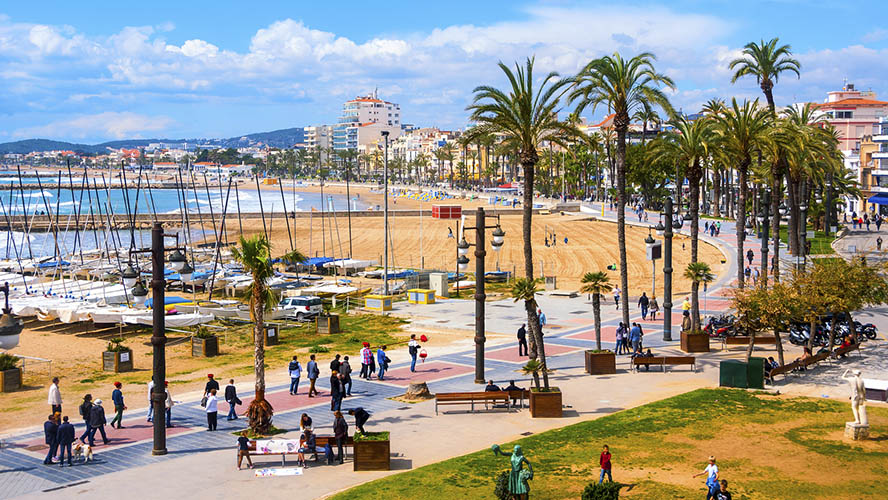 Sitges’ nights are legendary too. There are plenty of pubs and clubs, largely concentrated on Carrer Primer de Maig, known locally as ‘the street of sin’. Some of the names you should remember are: El Beso, Sweet Pacha Sitges and Las Vegas Sitges. Remember that many of them are gay bars. If you visit during the Gay Pride fiestas, normally held in June, the crowd drawn here is even more diverse.

Lovers of the big screen never miss the famous annual International Festival of Catalan Cinema in Sitges, which was the world’s first festival dedicated to fantasy film. It was first held in 1968 and known as the 1st International Week of Fantasy and Horror Cinema. It’s one of the most famous festivals in the country, and the program, spread over several days, is crammed full of films and tributes to internationally known names in the world of cinema.

There’s no better way of saying goodbye to the city than taking a walk along the seafront admiring the mansions whilst the sun sinks below the horizon. Soak it up. It’s magical. 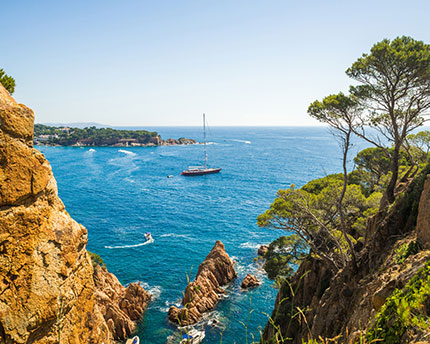 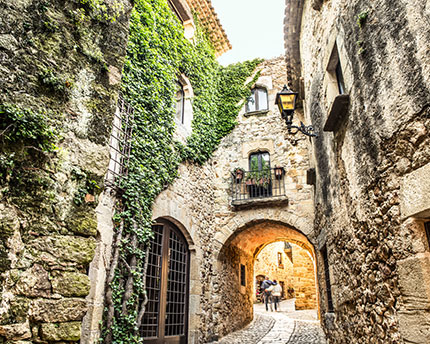 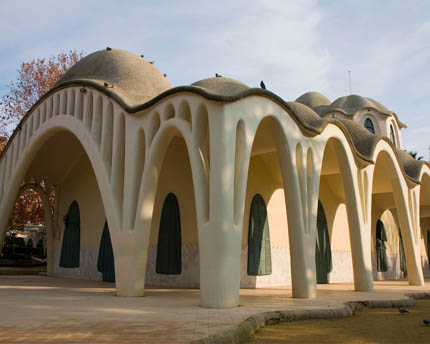