Pintxos are a fundamental part of the food of the Basque Country. Many dishes and many creations also come in miniature form or are made exclusively in this format. The idea is to bar hop, choosing the pintxos from the bar that most grab your attention, accompanying them with a zurito (a small glass of beer), wine or, since we’re here, a txakoli (a slightly sparkling white wine).

If you’re thinking about visiting Bilbao anytime soon, be sure to make a note of these places for the city’s definitive pintxo route.

Going for pintxos in the centre of Bilbao

The most curious thing about this area of the city is its history. It used to be said that the Casco Viejo (Spanish for Old Town) was initially formed of three streets built around the former alcázar (now the Church of San Antón), and that they later expanded, giving rise to the seven streets that it now comprises. However, numerous studies, made when work took place on the Casco Viejo quarter, confirm that there were seven streets from the very beginning, having been created at practically the same time.

The heart of the capital of Biscay is one of the most popular spots for pintxos for both tourists and locals. Bar hopping is the way to go, as there are an abundance of traditional bars serving these bite-size delicacies.

First off is Bacaicoa, a bar on Plaza de Unamuno that specialises in chorizos del infierno (Spanish for chorizo from Hell). It’s worth a visit just to see how they are prepared—a real spectacle! 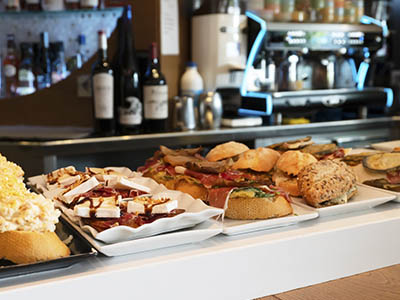 The next stop is one of the most traditional bars in Casco Viejo. The success of Sorginzulo is down to the simplicity of both their dishes and the establishment. The house speciality is an anchovy pintxo, made according to a secret recipe.

One of the best places in the Siete Calles (Spanish for Seven Streets) area of Bilbao’s old town is Bar Charly. It has acquired quite a reputation and is renowned for its bar, which withholds an enormous variety of pintxos (we’re sure you won’t know which ones to choose).

On Calle Somera are establishments such as Motrikes, where you can enjoy a good txampi, a mushroom pintxo that you can order with varying degrees of spiciness.

Plaza Nueva is home to places such as Gure Toki, a bar with a traditional style that recently added some more modern pintxos to its menu. In 2017 it was named the Best Pintxos Bar, making it a must-visit for all.

On the same square is also Urdiña, a bar with a small yet top-quality selection. Here you must sample the deep fried squid slices, the croquettes, the scrambled eggs with ham and much more. It’s the quality not quantity that matters.

The bar with possibly the largest and most varied selection is Con B de Bilbao. Situated close to the river it is famous for its enormous pintxo bar. Here, fusion cuisine is the order of the day and more traditional dishes are blended with more modern gastronomy.

Pintxos at the La Ribera market 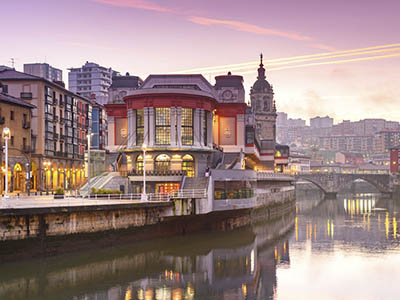 The La Ribera market is Bilbao’s top shopping destination. Situated on the Estuary of Bilbao, it boasts the perfect atmosphere for enjoying the area’s cuisine.

In its early days it mainly sold fresh fish, but little by little it began to modernise and although it has retained its traditional food stalls, there are also places in which you can sample local food, with freshly-bought market produce.

In particular, places such as the La Ribera restaurant, where you can go at any time of the day to enjoy brunch, lunch or, of course, pintxos. It is known for its atmosphere and its jazz spirit with live performances from established and emerging groups.

The most popular areas for pintxos in Bilbao

In addition to those already mentioned, there are several streets in the city that are very popular due to their abundance of pintxo bars. These streets make up the area known as Diputación, a buzzing tourist area due to its proximity to the commercial and cultural centre. Here, of special note is El Globo, where you can try baby cuttlefish au gratin or txangurro (stuffed crab).

Things wouldn’t be complete without speaking about Calle Ledesma and Calle García Rivero, two streets which, although on the small size, are full of bars where you can indulge in some pintxos and enjoy the city’s ambience.

And, of course, we can’t forget the residential neighbourhood of Deusto, which boasts a great pintxo tradition. Very popular establishments include the long-established Oriotarra; Txindoki, with its long bar; and La Papa.

Now you know all this, what’s stopping you from going for pintxos in Bilbao? Get to know its cuisine in the most authentic way possible.