Mérida was once known as Augusta Ermita and was the second most important city, after Rome, of the Roman Empire. It is then no surprise that it strived to match Rome in beauty and grandeur. The result was a stunning architectural legacy that can be enjoyed today. This UNESCO World Heritage Site boasts major archaeological remains from not only Roman times but also from Visgothic, Islamic and Christian periods – a testament of the city’s vast historical heritage. Some of the magnificent monuments are so well preserved, you may believe for a second you stepped back in time.

Mérida is a relatively small city which makes it perfect to discover on foot. It can be truly compared to an open-air museum as there seems to be something to admire around every corner. If you are travelling to Mérida with children, they will be seduced by the rich history as they embark on the historical journey filled with gladiators and Roman legions. Read on to discover everything Mérida has to offer!

The aqueduct, the amphitheatre, the theatre, the Moorish fortress are just some of the historic landmarks Mérida boasts. The city is located just 75 km south from Cáceres and should be included in your itinerary through Extremadura – not just for its incredible architecture but also for the exceptional traditional cuisine it serves up. Come on! Let’s see what Mérida’s historic centre is hiding.

The Roman Theatre of Mérida

The  majestic Roman Theatre of Mérida is one of the most important historic landmarks of the city and one of the best-preserved examples of classical Roman architecture in Spain. Even though the theatre was erected almost 2,000 years ago, present-day spectators can still enjoy performances under the stars, such as plays put on by the world-renowned Mérida Classical Theatre Festival and concerts. There is something magical about catching one of these performances – the commanding presence of the centre stage with the stone statues and columns may have something to do with it. The theatre is open to visitors during the daytime so take a minute to step on stage and experience what Roman actors felt centuries ago. Then, explore the arcaded gardens located right behind the theatre. You’ll discover ancient ruins, including columns, thermal baths and even mosaics which once adorned homes. 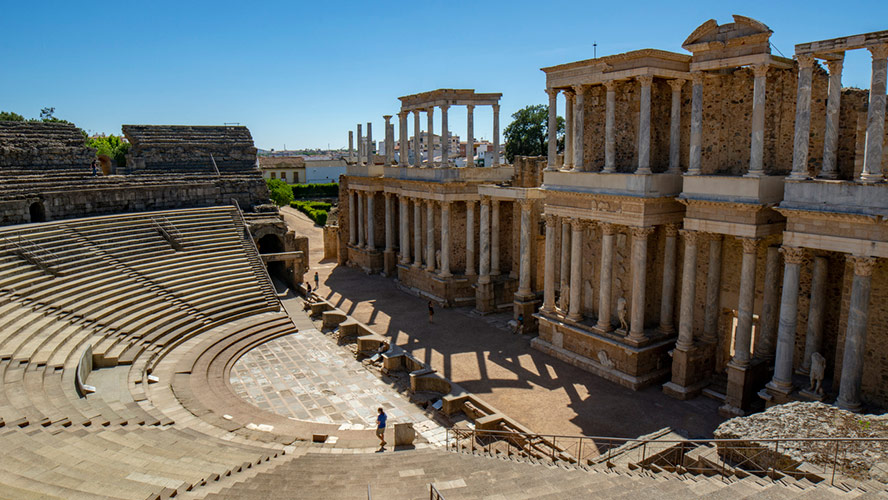 The Roman amphitheatre of Mérida

The amphitheatre hosted incredible battles between gladiators and animals during Roman times. It was built in 8 BC and could seat up to 15,000 spectators. The best-preserved section of the ruins are the lower stands that border the elliptical-shaped arena and the underground passageways which provided instant access to the arena. The Acueducto de los Milagros is the ruins of a Roman aqueduct located in a spacious garden. It was dubbed the ‘Miraculous Aqueduct’ because it is almost a miracle that it is still standing after all these centuries. It was built in the 1st century AD to supply the city with water from Prosperina Dam, located 5-kilometres away.

Another iconic monument of Mérida is the Templo de Diana. This splendid temple dates back from the 1st century AD and is the only surviving Roman place of worship of its kind in the city. The towering columns and tympanum are breathtaking.

Located just a brisk, 10-minute way away lies the 1st-century Circo Romano of Mérida. This hippodrome was the most important after Rome’s; it boasted a 403-m long track and could accommodate up to 30,000 spectators. It was built by the road that ran from Córdoba to Toledo. 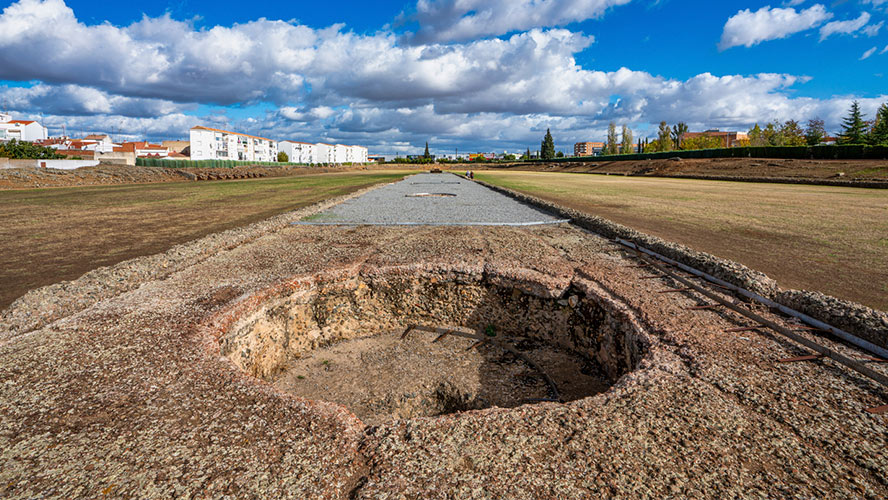 Even though many of the historical monuments date back to Roman times, Mérida also harbours other singular landmarks from other cultures worth discovering. One such example is the Alcazaba, the most ancient Moorish fortress of the Iberian Peninsula. It was built in the 9th century beside the Roman bridge and affords sweeping views of the city. It also boasts a splendid aljiba (cistern). 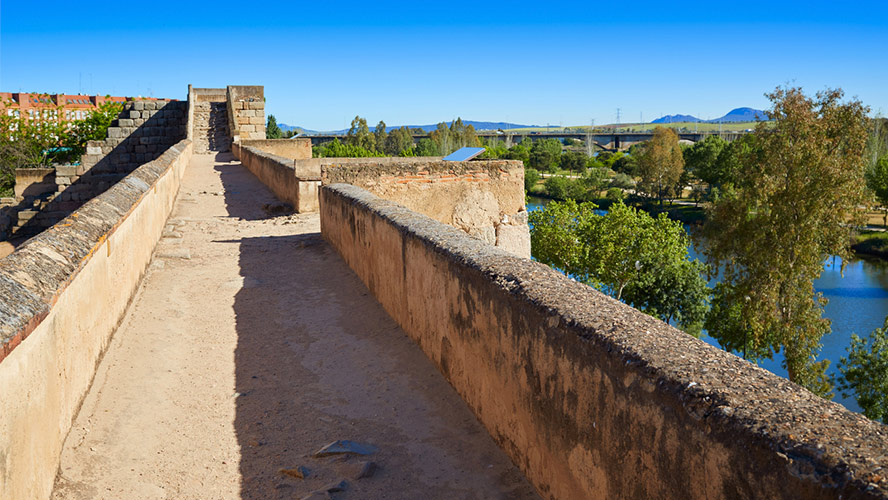 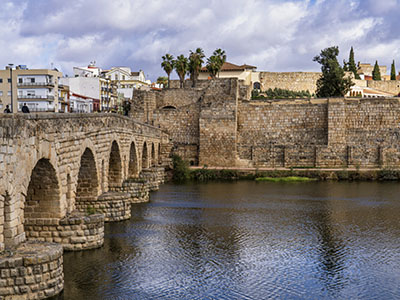 The 792-m long, Roman Bridge of Mérida has spanned the Guadiana River for over 2,000 years and has borne witness to the history that shaped this city. It still proudly stands today and constitutes part of Vía de la Plata, an ancient commercial and pilgrimage route.

Casa de Mitreo is a 1st-century Roman house whose well preserved ruins provide a unique glimpse at what a Roman home looked like with its patios and pond. You’ll also discover the beautiful remains of a mosaic, depicting the creation of the world.

Eating out in Mérida

It would be a sin to not savour some of the city’s succulent cuisine before heading out. Mérida offers a suite of eateries from no-frills tapas bars, serving up traditional fare to more refined dining spaces. If you are looking for great food at a great price head to Mesón El Pestorejo (Berzocana, 16), located by Plaza de España. Those looking for a sit-down restaurant, book a table at Rex Numitor (Castelar, 1) or La Alacena del Foro (Plaza de la Constitución). Both establishments offer a wonderful selection of tasty dishes. If you are looking for traditional Extremenian cuisine with a creative twist in an exclusive setting, you won’t be disappointed with A de Arco (Trajano, 8), located right by the Trajan Arch.

How to get to Mérida: 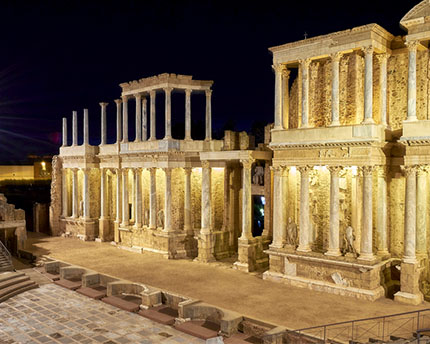 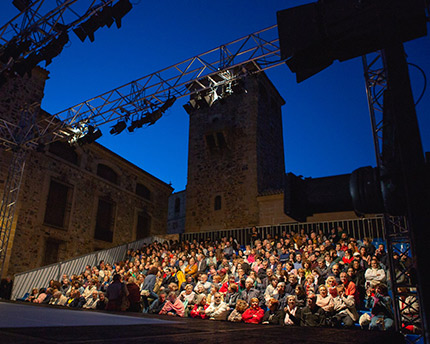 Cáceres Festival of Classical Theatre: a gateway to the Golden Age