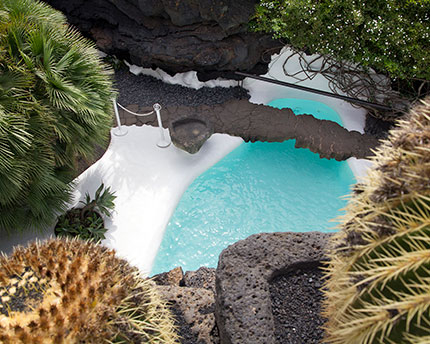 Lovers of architecture will be thrilled by the remarkable building that houses the headquarters of the César Manrique Foundation. The building, called El Taro de Tahíche, is located in the town of Teguise, and was César Manrique’s home for over 20 years. The term ‘taro’ is a reference to a type of building (typically found in rural areas of the Canary Islands) in the form of a circular tower, which is used for various purposes such as curing cheese or storing farm implements.

The César Manrique Foundation (Fundación César Manrique, in Spanish) is a private, self-financing cultural organisation that works to protect both the plastic arts and the cultural and environmental values of the island of Lanzarote. In addition, it encourages people to study, reflect upon and discuss the artistic legacy of César Manrique, and promotes the dissemination of his work.

César Manrique, an essential figure in the appreciation of Lanzarote

Most artists leave as a legacy the chance for people to go on enjoying their paintings, sculptures or buildings. In the case of César Manrique, however, his legacy transcends the—far from insignificant—dimension of the purely artistic to influence the development of his native island in a much broader sense. Manrique left the Canary Islands to study at the renowned San Fernando Academy of Fine Art in Madrid, and lived in Spain’s capital city between 1945 and 1964. Subsequently, this native of Lanzarote moved to New York, where he came into direct contact with the twentieth century’s transcendental artistic movements such as abstract expressionism and pop art.

It was immediately after this period that he decided to settle permanently in Lanzarote, as he was conscious of the island’s unique natural assets and its possibilities for tourist development. Thus, from the 1960s onwards, César Manrique designed some of the island’s most iconic buildings and installations, including the Mirador del Río [Viewing Point], the home known as Lagomar and the Jardín de Cactus [Cactus Garden]. These works, as well as the Foundation, demonstrate a close relationship between art and Nature, although throughout his work, Manrique displays an enormous respect for the environment. In fact, the Lanzarote artist received awards such as the Europa Nostra Prize and the World Prize for Ecology and Tourism in recognition of his achievement in harmonising contemporary architecture with Nature.

The César Manrique House-Museum in Lanzarote

The Taro de Tahíche was designed by Manrique himself (together with a few artist friends of his) on his return from the United States. The dwelling itself occupies an area of 3,000 square metres, on a plot of 30,000 square metres. The present Foundation, opened in March 1992—six months after the death of Manrique—comprises the former residence, staff quarters and garages.

The building’s outstanding feature is that it was constructed on lava produced by volcanic eruptions that occurred between 1730 and 1736. The upper floor displays a subtle balance between local architectural traditions and the modernity of certain functional elements. Located on this floor are César Manrique’s salon, his living room, a guest room, the artist’s bedroom and the kitchen.

The lower floor provides possibly the strongest evidence of Manrique’s obsession with linking architecture and Nature, as it is arranged around five volcanic bubbles, which were adapted to transform them into habitable rooms. The architect linked them with open passages cut into the basalt rock, and created within them a swimming pool, a dance floor and a barbecue, among other things.

The building possesses some truly amazing features, including windows through which lava enters, thereby creating a connection between the building and the volcano that makes it difficult to tell where one ends and the other starts. Similarly, the contrast between the blackness of the volcanic rock and the luminous white of the walls is present throughout the entire structure. This effect is particularly striking in the areas where the rock retains its original colour in the upper section of the walls, with the lower, painted, white strip creating the effect of a plinth, as can be seen with the swimming pool. Still at the swimming pool, we can see how the Canarian architect adapts the volcanic lava to create a bridge.

Outside, it is worth pausing to admire the mural designed by Manrique between 1991 and 1992, first tracing its design with volcanic rock, and then filling the spaces in between with tiles. The garden (as one would expect of a garden in Lanzarote, and especially one created by César Manrique) contains various varieties of palm trees and cactus.

It is worth remembering that the Foundation is in a building designed as a dwelling, and not as a space for exhibiting paintings and sculptures. Nevertheless, it was Manrique himself who initiated its conversion back into a museum. The project basically consisted of clearing the wall space to allow paintings to be displayed, and of providing a direct connection between the two floors.

The museum’s holdings include César Manrique’s own collection of contemporary art, which features works by Cuixart, Chirino and Equipo Crónica. The museum also houses a small collection of Canarian art, as well as three further rooms of works by Manrique.

Without question, a visit to the César Manrique Foundation is essential for anyone who wishes to understand the author of the great transformation of Lanzarote. 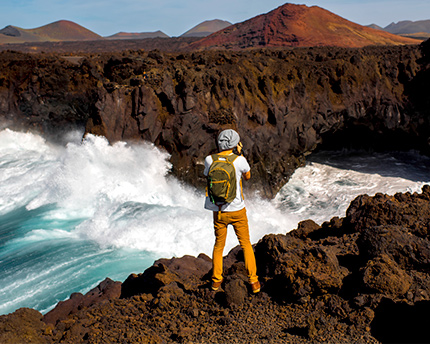 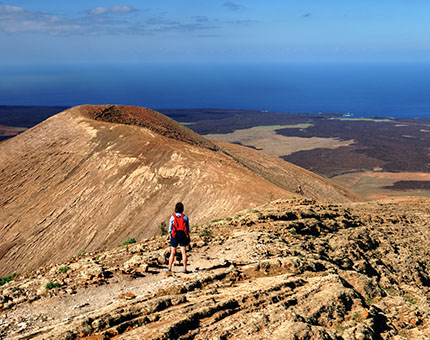