The Community of Madrid boasts terrain full of distinct contrasts—mountains in the north and plains and meadows in the south—which makes it a perfect place for hiking routes. Unfortunately, the urban Madrileño, deafened by the horns and dazzled by the skyscrapers, sometimes seems to forget about the natural treasures that silently await in the surrounding area. From the indomitable peaks of the Sierra de Guadarrama and the Sierra de La Pedriza to the calm countryside of Brunete and Algete, the array of landscapes in Madrid is extensive and varied, and in most cases they can be reached by car in no more than an hour. In addition to the obvious active pursuits that the mountains and other natural settings offer, it’s well worth remembering that they also bear the marks of history and culture, legends, uses and customs and much more.

Read on for two routes somewhere in-between Nordic walking and moderate mountaineering, so that your time in Madrid isn’t just spent amidst tarmac and glass.

The summit of Peñalara: a pleasant climb up to Madrid’s highest point

Despite being the tallest point in the entire Community of Madrid—2,428 metres—the climb to the summit of Peñalara is accessible for everyone. Before hiking up mountains began to permeate modern society, only hunters and shepherds would come here in search of prey, as described by the Libro de la Montería, a detailed book on nature dating from the period of King Alfonso XI.

Situated in the heart of the Sierra de Guadarrama, which forms a natural border between the provinces of Madrid and Segovia, the base of the mountain is just an hour and a half away from Madrid by car, which is why it is advisable to head there early. It is entered by way of the icy Los Cotos mountain pass, down the road from the more well-known Navacerrada mountain pass. Once there you can leave your car at a large, free car park, and a nearby interpretation centre provides us with all the information we need to set out on our climb.

As we make headway through Scots pine trees, our surroundings soon take on a wild beauty with trees stripped bare by the wind. Around us, granite shimmers under the sun and we begin to stumble upon mountain goats and cows, imperial eagles and black vultures. Zigzagging paths marked with milestones gradually reveal a succession of historical vestiges: the Zabala refuge, named after one of the twelve founding members of the first Spanish mountaineering association; numerous cirque glaciers, among which the Los Pájaros Lagoon particularly stands out, and dugouts originating from the Spanish Civil War. At the summit a truly incredible sight awaits, with panoramic views that stretch from the nearby Sierra de Gredos to the four towers in the centre of Madrid.

Recommendation: On your way back to the car park, why not visit Venta Marcelino, a rustic tavern located within the Los Cotos mountain pass itself, which serves traditional Castilian dishes such as white beans cooked with chorizo and blood sausage, or garlic soup, both perfect for cold winter days.

The Guadalix river canyon (or the Route of the Aqueducts)

From the town of San Agustín de Guadalix, right in the heart of Cuenca del Medio Jarama, you can access the only example of a river canyon in the Community of Madrid. Known as the Guadalix canyon, it is a deep gorge carved out naturally by the river of the same name, whose course today serves as a guide for a range of tourists and hikers.

Although it is a low difficulty, circular route, which can therefore be completed all year round, it should be avoided on rainy days. You can also take advantage of the fact that the trail starts in the town of San Agustín itself to take a short stroll through its hilly streets for the perfect prelude before starting the trail.

Once on the route, the first stop takes place in the Los Patos Lagoon Recreational Area, in the far north of San Agustín. The small park’s main attraction is found in its aquatic environment, home to birds, amphibians, small reptiles and some fish.

However, the aim of the route is to reach what is known as Hervidero waterfalls, two deafening cascades that form a separate pool below. If visiting in summer, a good dip in its waters could be the perfect reward for all your exertion. But first, the Guadalix gorge offers a pleasant walk through dense holm oaks, junipers and alders (for those that are interested, it is the last tree species, native to areas with high humidity, that gives its name to the river). You’ll also come across numerous natural pools—the Poza del Brincadero for instance—cross wooden bridges such as the San Antonio bridge, and see various remains from the first project undertaken by the company Canal de Isabel II in Madrid.

This last feature refers to a series of aqueducts, the majority dating from the nineteenth century, when the young Queen Isabella II ordered the construction of an innovative network of hydraulic canals that would provide water to the capital. The Retuerta Aqueduct and the El Mesto dam built from dry-stone, but both no longer in use, are a fine example from the time.

Recommendation: Returning to San Agustín is a good opportunity to visit El Raso, a welcoming restaurant whose specialities are mostly inspired by Basque cuisine.

on these hiking routes, we recommend visiting the following website:

By car: take the road from A Coruña (A-6) to Villalba. Once there take the M-601 to the Navacerrada mountain pass, then turn right onto the M-604 until the Los Cotos mountain pass.

By bus: route 691 departs from the Moncloa bus-rail interchange station in Madrid every hour.

By train: the Guadarrama electric train, also known as the Ferrocarril de Cotos, departs from Cercedilla.

By bus: take the Continental Auto service, which departs from Ríos Rosas. You can also take buses 191, 193, 194, 195 and 196 from the Plaza de Castilla bus-rail interchange station in Madrid. 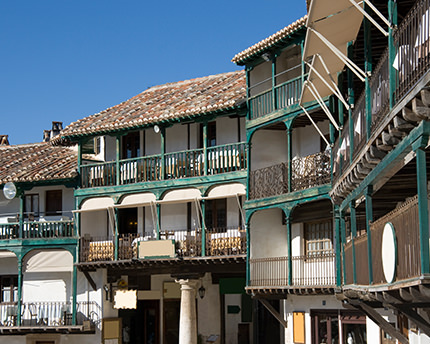