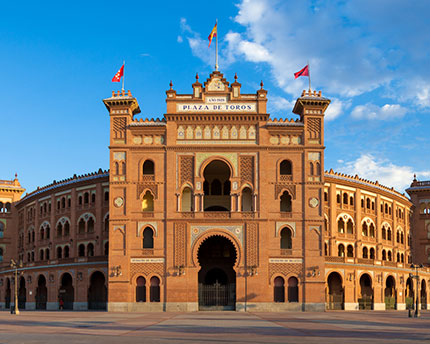 Bullfighting is a tradition that generates a vigorous social controversy between those who consider it an art form and those who steadfastly maintain that it is, purely and simply, cruelty to animals. Irrespective of the personal opinion one holds on this matter, we believe that there are buildings that are worth visiting from a different perspective—even if we do not agree with what they represent, we can still appreciate their architectural worth and gain a better understanding of certain aspects of popular culture.

For that reason, we suggest visiting this particular bullring which is certainly a site of cultural interest as a historic and artistic monument.

The history of the Las Ventas bullring

The first person to come up with the idea of building a bullring on a monumental scale for the Spanish capital was the bullfighter José Gómez (Joselito). His suggestion sprang from the fact that the Madrid’s old bullring, located on the Aragon road, was getting to a point where it could not keep pace with the growing passion for bullfighting among the city’s inhabitants. For this reason, the Sevillian matador argued that building a larger bullring would enable admission prices to be reduced, and thereby increase the number of people who could enjoy the spectacle.

The project for the bullring was entrusted to José Espelius, the architect also responsible for other leisure buildings in the city (including the Teatro Reina Victoria and the Cine Ideal) —although he died before the work could be completed. The project then passed to Manuel Muñoz Monasterio, the architect of the Santiago Bernabéu stadium, and the inaugural bullfight was held on 16 June 1931. However, there were no further bullfights until 1933, because certain structural problems arose from the fact that the site was not particularly suitable. This area was known as “Las Ventas del Espíritu Santo”, which eventually gave the bullring its name. 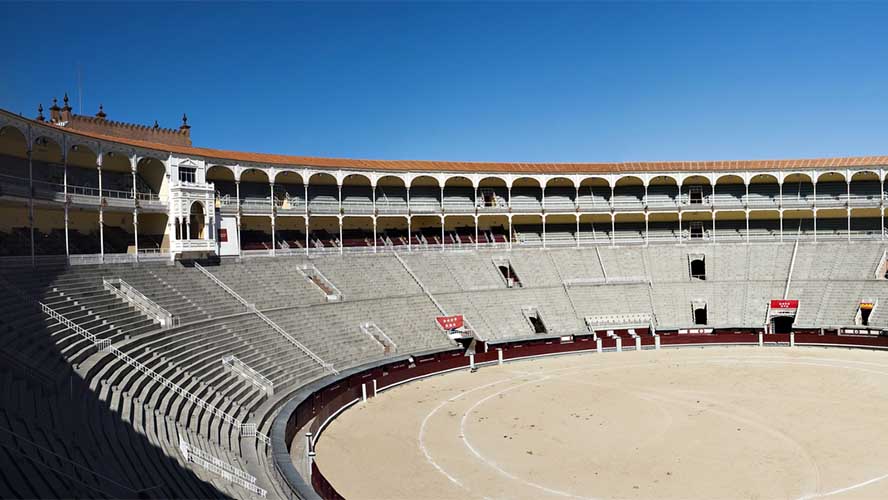 The official opening took place in 1934, but the outbreak of the Civil War brought business to a standstill once again. During the conflict, the bullring was turned into a vegetable garden to grow supplies for the soldiers.

The choice of Neo-Mudejar style

The style chosen for what would become the third largest bullring in the world after those of Mexico City and Valencia (Venezuela) was the Neo-Mudejar. If we define Mudejar as the architectural trend that, from the thirteenth to the sixteenth centuries, harmoniously blended elements of Christian art with decorative Arab motifs, Neo-Mudejar could be described as a uniquely Spanish historicism or revival. That is why it was considered at the time that the style was appropriate for a building destined for an activity as typically Spanish as bullfighting.

The Neo-Mudejar style would be used for other types of buildings. Good examples are Cádiz’s Teatro Falla and the railway station in Toledo. The style’s distinctive characteristics, which are clearly evident in Las Ventas, are the use of brick as a building material and the use of Arab-inspired decorative features. 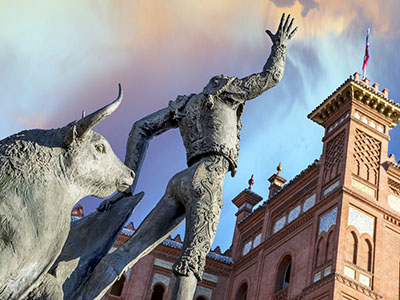 The Las Ventas bullring exemplifies how a material as humble as brick can turn out to be aesthetically appealing and very versatile if it is used to mark out geometrical shapes, such as loops or diamonds—while at the same time embracing a comprehensive repertoire of horseshoe arches, poly-lobed arches, semi-circular arches, etc.

Anyone who would like to know more about the history of the bullring and about the development of bullfighting in Spain can visit the bullring’s museum. Some of the pieces especially deserving of attention are the famous La Tauromaquia [Bullfighting] series of engravings by Francisco de Goya, and various bullfighters’ costumes dating from the last century. Other parts of the bullring worth seeing include the infirmary—equipped with two operating theatres—, the chapel and the various cultural halls. 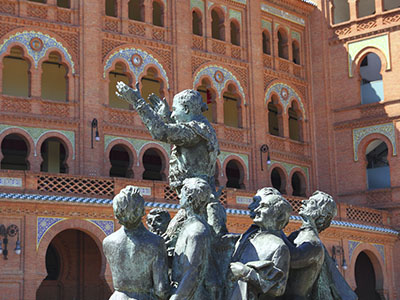 The week of 15 May, the day dedicated to San Isidro Labrador [Farm Worker], the capital’s patron saint, marks the start of the most important celebrations in Madrid’s calendar of festivities. As well as concerts, plays and the traditional visit to La Pradera (the Meadow), the week also includes the date most eagerly anticipated by bullfighting fans: the Feria of San Isidro.

This annual event first took place in 1947, when the entrepreneur Livinio Stuyck took over the management of the bullring and decided to set a fixed price for admission to all the bullfights held at Las Ventas during the month of May. Gradually, the festival grew and began to compete with the important April Feria in Seville. Nowadays there is no contest, at least in terms of the number of events, as the programme at Las Ventas includes over thirty items: bullfights, bullfights on horseback and bullfights involving young bulls and picadors.

In a nutshell, there are any number of reasons to visit the Las Ventas bullring. We would stress that, whether you are a fan or an opponent of bullfighting, it is worth a visit just to see one of the most characteristic examples of Neo-Mudejar architecture.