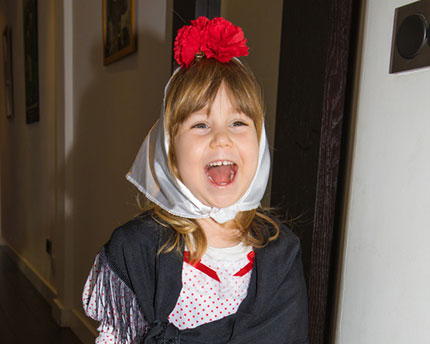 The month of May brings the Fiestas of San Isidro to Madrid. This is the celebration of traditional, authentic Madrid, and the capital’s streets fill with residents wearing carnations and Manila shawls. These fiestas include traditional dances along with shows by the most popular contemporary bands.

San Isidro is the patron saint of Madrid, and his celebrations therefore have a religious aspect. The fiestas begin at the Saint’s hermitage with the blessing of the water from the Fuente de San Isidro, which dates from the twelfth century, and to which miraculous powers are attributed. For a few days, the fountain remains constantly open to dispense water to pilgrims. In a more jovial atmosphere, the fiestas begin with Gigantes and Cabezudos [Giants and Big Heads: figures in fancy dress, including huge, papier mache heads who traditionally feature in festive processions] parading through the centre of Madrid and the reading of the proclamation in the Plaza de la Villa.

Francisco de Goya immortalised the image of the Goyescas en la Pradera de San Isidro. This is where, on 15 May every year, a great number of Madrid’s inhabitants and visitors gather to have lunch on the pradera [meadow], amid amusements for children, food stalls and chotis (a popular Madrid dance), along with other folk dances. In the morning, the Pilgrimage Mass is celebrated on La Pradera in honour of San Isidro.

But fiestas in honour of the patron saint take place all over the city. Various squares and parks are the setting for a whole host of activities and concerts. In areas as diverse as the Plaza Mayor, las Vistillas, the Templo de Debod, the Park of Enrique Tierno Galván, and the Plaza de Oriente, the city puts on over 200 events and activities every year, so it is worth consulting the programme at the City Council’s website.

The San Isidro celebrations are the best time to see Madrid inhabitants in their traditional chulapo costume. Women wear an embroidered silk Manila shawl, a dress with polka dots and a headscarf with a carnation. The men, the chulapos of Madrid, wear a waistcoat, a palpusa (chulapo cap), a safo [neckerchief] and a carnation in the lapel.

The chotis is the capital’s traditional dance. Participants dance in pairs, facing each other. The woman (chulapa) dances around her male partner (chulapo) who follows her without moving from the spot. It is said that a good chulapo can dance the chotis without moving from a single paving stone.

What is eaten during the fiestas of San Isidro?

The typical sweet treats during the Fiestas of San Isidro are rosquillas, a kind of doughnut which may be listas [literally, “clever”, or sugared] or tontas [literally “stupid”, or plain], but you will also find Santa Clara rosquillas, French rosquillas or iced ones in any number of flavours, so even traditional rosquillas have evolved over recent years. However, they are all based on the same ingredients: a dough made from flour, egg, sugar, aniseed and oil for frying. These, in their most basic form, are the “tontas” or plain version. To make them “listas”, they are covered with a coating made from sugar, lemon and beaten egg. The Santa Clara rosquillas (which were first made by nuns at the Monasterio de la Visitación) are covered in meringue, while the French ones contain ground almonds.

At the stalls on the Pradera de San Isidro, you can find a wide variety of flavours of rosquillas listas including coffee, orange, strawberry, etc. During the festivities, it is also easy to find traditional barquilleros [rolled wafer sellers] with their antique barquilleras [cylindrical containers for storing the wafers], decorated with iconic images of Madrid, and on top the wheel of fortune on which, in years gone by, customers could try their luck.

Lovers of offal will also have the chance to try tripe and chitterlings. A dish exclusive to Madrid which nowadays is served in very few establishments. Sales are almost completely limited to stalls at fairs. On the Pradera de San Isidro, however, it is easy to find these offal specialities, either in rolls or in paper cones. They are made from part of the intestines of lambs, which are fried in their own fat.

During the fiestas, Madrid’s squares are flooded with performances of zarzuelas [traditional musical comedies] and folk music. Every year since 1953, without fail, traditional dances by Regional Folklore Societies from all over Spain have been performed in homage to San Isidro.

The Plaza Mayor and Las Vistillas are, along with the Pradera, the principal focus of the night-time festivities in honour of San Isidro. In recent years, however, they have been joined by other locations, such as Madrid Río, in a bid to reach a wider audience. Traditional and independent music concerts and street parties flood these spaces with a joyous, welcoming atmosphere for visitors.

In the Las Ventas bullring the biggest bullfighting festival in the world is held to coincide with the fiestas for Madrid’s patron saint. At the Feria de San Isidro (which in 2016 was declared a festival of general interest for the city of Madrid), a month-long programme of bullfights, festejos de rejones [horseback bullfights] and novilladas [bullfights with young bulls] is organised. Between 10 May and 10 June, the great bullfighters of the day and the leading herds play out the whole bullfighting season before a demanding audience that only allows a select few to triumph.

The patron saint of Madrid was a twelfth-century peasant born in Mayrit, the Madrid of the time of the Muslims, who held a profound Christian faith. While he prayed in the church, his oxen ploughed the field by themselves. Although his companions called him a layabout, his boss saw that Isidro’s plot of land produced twice the harvest of the other workers’ plots. Isidro married Santa María de la Cabeza. Many miracles were attributed to him, including the curing of King Felipe III. 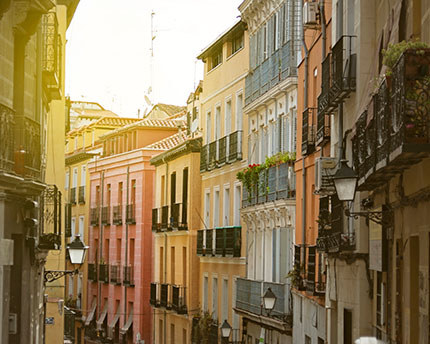