Madrid’s Plaza Mayor is a surprisingly open-plan space right in the heart of the Spanish capital, encircled by narrow streets. These days, the bars and cafés under its colonnades brim with life, as do their delightful terraces. Tourists and Madrilenians alike gather here for a coffee or, as tradition dictates, a calamari roll accompanied by a nice, cold beer. But, when night falls, when the streetlights bathe the cobblestones in their orange-tinted light and when the visitors have trickled away, if you put your mind to it you can still imagine what the seventeenth-century city would’ve been like: The Madrid of the Habsburgs, distinguishable by the style of its red brick buildings, the granite, and the unmistakable slate of its rooftops and steeples.

Plaza Mayor’s story dates back to the year 1617, when Philip III entrusted the execution of the project to Juan Gómez de Mora, intending it to serve as the backdrop for the city’s most important festivities. The design of the architect from Cuenca, preserved to this day in the Archivo Histórico de la Villa, the city’s historical archives, involved the stylistic unification of a series of buildings and the demolition of others, a sacrifice that was necessary in order to create the large rectangular space that today sits in the heart of the capital. 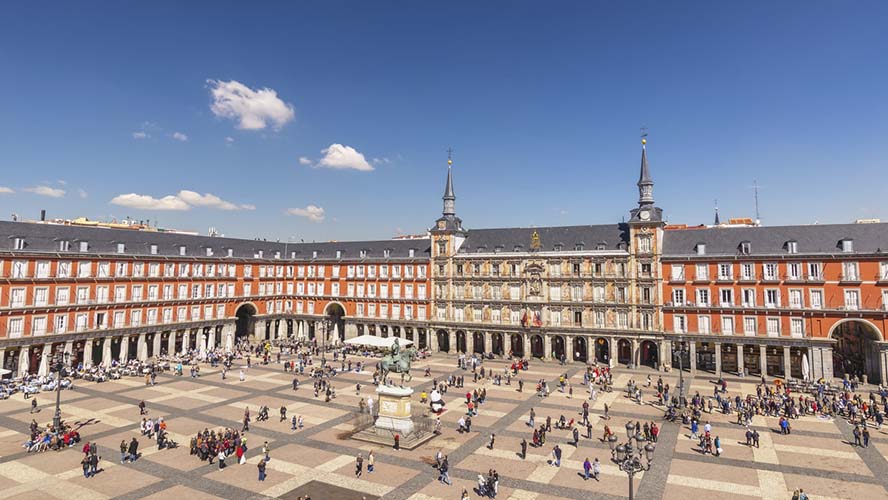 Throughout the Modern Age, the Plaza Mayor was to serve as the backdrop to important festivities organised by the court, as the dramatisation of collective celebrations was one of the cornerstones of Baroque society. That meant that the Plaza Mayor played host to everything from bullfights that pulled more than 50,000 spectators to the proclamation of monarchs, as well as processions, tournaments, and even executions, with the convicted both hung and garrotted.

However, today the square looks very different to how it did originally, as various fires have shaped it over the years. The most devastating was undoubtedly the one of 1790, as a result of which Juan de Villanueva, a figurehead of Spanish neoclassical architecture, was entrusted with its reconstruction. Villanueva was responsible for closing off the corners of the square, creating the entrance archways and standardising the height of all the façades. His contribution was an extremely significant one. 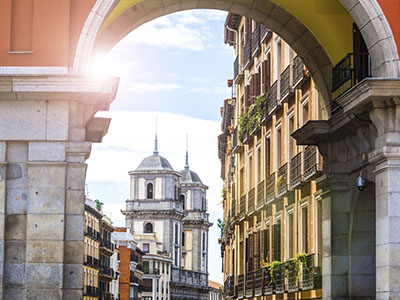 What to see in Madrid’s Plaza Mayor

The building that dominates the north façade was initially constructed in 1590 on the orders of Diego Sillero. That means it predates the design of the square, but it was finished and transformed by Gómez de Mora to integrate it with the rest of the buildings. Its name is owed to the fact that it was once the headquarters of the principal bakery in the city, an institution in charge of regulating the price of bread to ensure it was accessible to less well-to-do citizens. It’s well worth studying the murals that were painted on its façade by the Madrilenian painter Carlos Franco, amongst which you can pick out mythological characters with links to the Spanish capital, such as the goddess Cibeles.

Standing opposite the building mentioned above but decorated in a much more sober fashion, the Casa de la Carnicería was home to the meat warehouse and supplied the city’s most important markets. 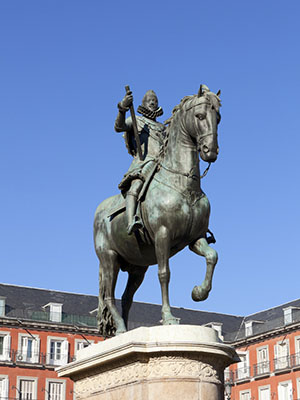 You can access Plaza Mayor through ten towering archways, some of which have names that reflect the commercial activities that used to take place beneath them. Amongst them are the Arco de Cuchilleros (Cutlers), the Arco de Botoneras (Buttons) and the Arco de la Sal (Salt).

The statue of Philip III

This is an elegant equestrian statue designed by the Italian Juan de Bolonia—Giambologna—and finished by Pietro Tacca, his protégé, in 1616. It was created using the copper casting technique and was originally located at the entrance to the Casa de Campo park until Isabel II decided to share it with the people in 1848. From then on the sculpture has stood in the heart of Madrid, with the exception of the duration of the two Spanish republics.

Plaza Mayor’s calamari rolls are not to be missed

Sure, we’re history fans and we’re obsessed with architecture, but we’re bar-lovers too. What’s more, here, we just so happen to be in the perfect place for sampling one of the capital’s most typical and authentic dishes: the calamari roll or baguette. It might seem simple, but there are lots of bars around the square and in the immediate surroundings, and each of them has their own special way of preparing it. They might fry the calamari differently, the size might vary, or they might use a different kind of bread. There are even bars that dare to add avant-garde touches to these classic baguettes, making them with tempura or serving them deconstructed. The only thing that never changes is the perfect accompaniment to your food: a well-pulled, cold beer.

If you can already feel your mouth watering, then head to one of these places:

You can’t leave Madrid without visiting the Plaza Mayor, the beauty and historical importance of which make it one of the corners of the capital that you just can’t afford to miss. 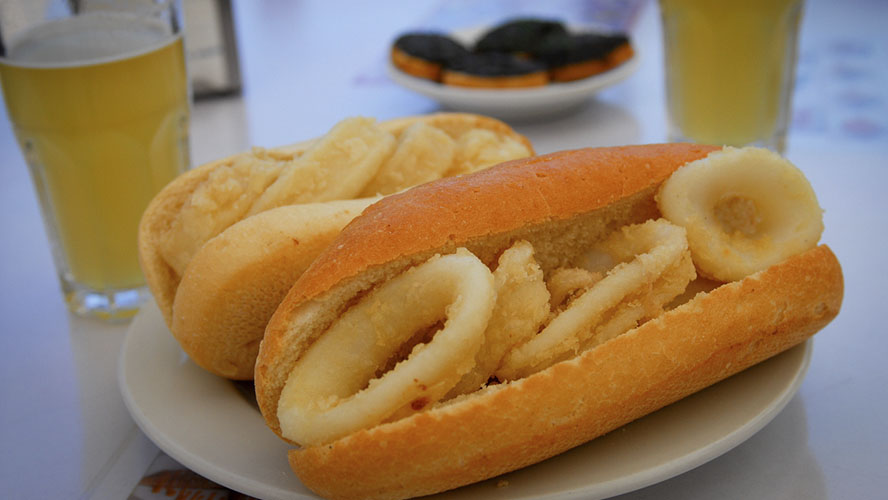