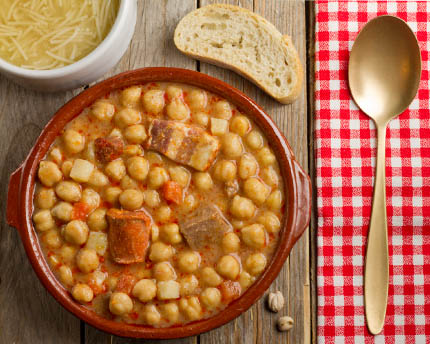 Madrid + traditional + food = a spoon. This is the recipe for success of Madrid’s cuisine, whose aromas waft through the streets, inviting you to grab a table at one of the many restaurants, bars or terraces. In spite of having its own cuisine, there’s no doubt that the people of Madrid owe a lot to the Castilians and Manchegans, who brought with them the best of their gastronomy when King Philip II established Madrid as the capital of the Kingdom of Spain in the summer of 1561 and many migrated there in search of better fortunes. The same also occurs today, almost five centuries later, with the food of other cultures, which have managed to create a fusion recognised by the city’s many Michelin stars.

Madrid’s population doubled in a short period of time and began to shape a cuisine that can be categorised into the popular and the aristocratic, or the humble and the sophisticated. In the nineteenth century, taverns (the heirs to the traditional food served in inns), rustic eateries and the first restaurants serving Madrid’s traditional dishes began to emerge; cocido de tres vuelcos (a meaty stew, also known as cocido madrileño), soldaditos de Pavía (fried cod fingers), besugo a la madrileña (oven-baked sea bream), potaje de vigilia (a spinach and chickpea stew), bartolillos (cream turnovers) and much more.

Eating out in style

Where to eat the best cocido madrileño

If a spoon is an essential item for enjoying Madrid’s traditional food, cocido is without a doubt its most universal dish. But, where can you eat the best cocido madrileño? There are unquestionably as many variations and secret recipes as people who cook the dish. Over recent years, many chefs have even tried to preserve the flavour of cocido madrileño but by presenting it in a way that is far removed from the traditional version. However, if you’re after one safe bet, La Cruz Blanca de Vallecas (Martín Álvarez, 58) won the National Hospitality Sector Prize in 2015 for its cocido and every day people from all over the world sit down at its tables to sample it.

Why is it called cocido de tres vuelcos you ask? Tres vuelcos translates as three turns, because the dish is presented in three parts: first the broth with noodles, then the chickpeas with vegetables and, finally, the meat. These days most establishments serve it in two courses, with the chickpeas and meat together, including skirt steak and veal shank, stewing hen or chicken, fresh pancetta, blood sausage and chorizo. At Taberna y Media (Lope de Rueda, 30) it is served from Tuesdays to Fridays, and at the traditional tavern Malacatín (Ruda, 5), one of the temples of cocido, they set a fun challenge: finish it all and you don’t have to pay.

In the past the rich would only drink the broth and give the rest to their domestic staff, who would sauté the leftovers with egg, which has come to be known as ropa vieja—or old clothes. At the time it was a daily dish, but now most restaurants usually serve it at least once a week. 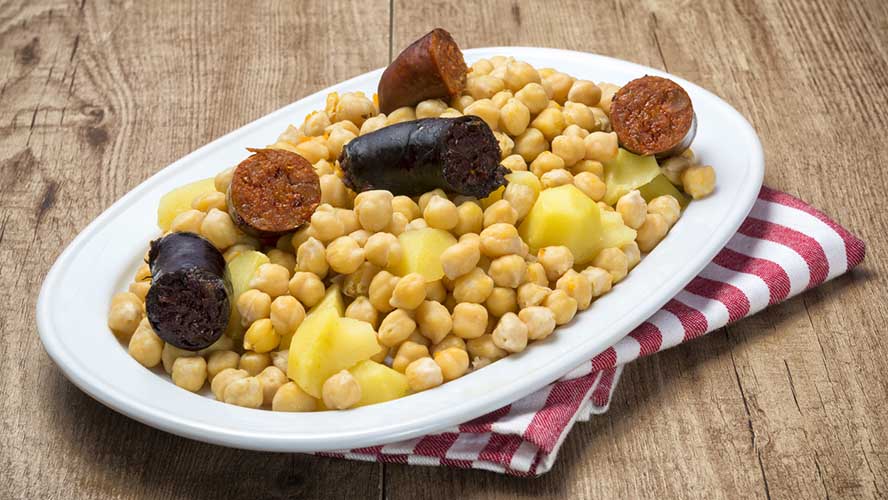 The best callos in Madrid

Pig snout and tripe are the essential ingredients of callos madrileños, a hearty dish that just has to be sampled and that differs from versions found across Spain, as it doesn’t contain chickpeas or choricero peppers. The best callos in Madrid have been made since 1560 with tomatoes, chorizo and paprika, and are eaten by soaking chunks of bread in the broth to savour the sauce. In fact, one variety of the dish, made without meat but with cod and chickpeas, is another one of Madrid’s traditional dishes: potaje de vigilia.

La Tasquería (Duque de Sesto, 48) is a modern bar and restaurant run by a TV chef, Javi Estévez, where you can try some of the best callos in Madrid. And the vermouth and callos found at Bodegas Ricla (Cuchilleros, 6), opened in 1867, must be sampled to get a real feel for Madrid’s most authentic side.

The capital’s stews and soups boast another special ingredient that makes them stand out from the rest: the high quality of Madrid’s water, recognised as one of the best in Spain. Therefore, it’s no wonder that the city’s stews and hotpots are of the finest quality. 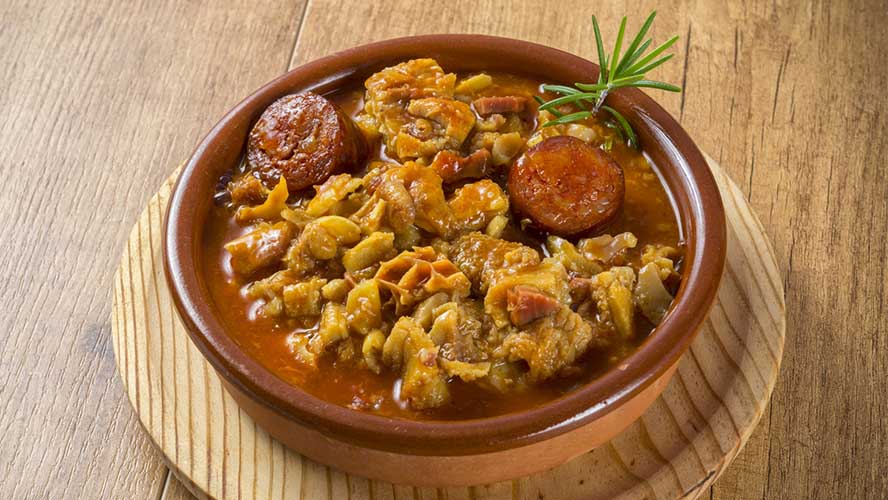 Patatas bravas and a calamari roll

Not everything in Madrid is eaten with a spoon however. The smell of fried food fills the city’s most authentic streets, where you can grab a tasty deep-fried calamari roll. It is somewhat surprising that one of the capital’s most traditional dishes is made using calamari, when the city is more than 300 kilometres from the sea, but it is Madrid’s most authentic fast food. It’s no wonder then that some 2,000 calamari rolls are served up every day at El Brillante (opposite Atocha train station). And up to three generations of Madrileños have been able to taste the calamari rolls served at La Campana (Botoneras, 6).

And what better thing to accompany a roll than some patatas bravas? Peeled potatoes chopped into irregular pieces, fried in oil and doused in a spicy sauce made with paprika are without a doubt the secret weapon of many bars. Around 8,000 kilos of patatas bravas are served every month at Docamar on Plaza de Quintana.

There’s no way we could forget classic dishes such as potato tortilla, grilled pig’s ear, Madrid-style snails and huevos estrellados (fried eggs and potatoes), which are the most common and most traditional tapas to be found on Madrid’s menus. 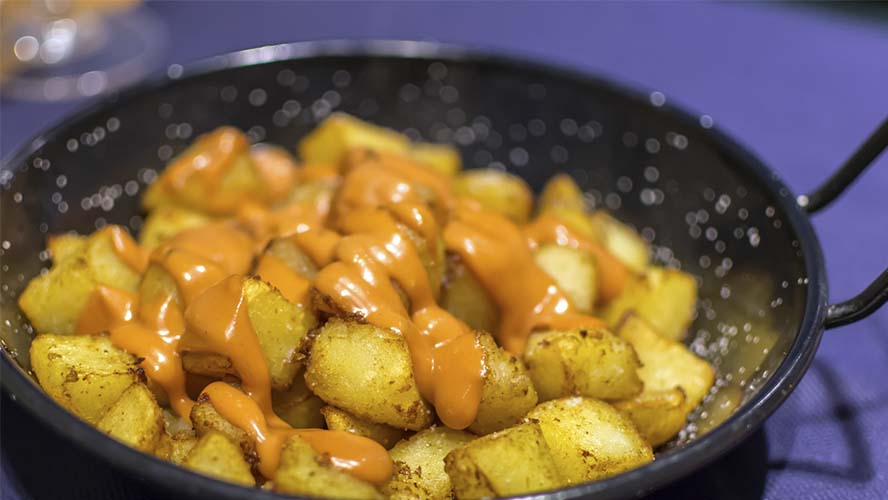 Churros and chocolate, at any time of the day

Cocido madrileño, callos, calamari rolls, patatas bravas and, of course, churros. Historical sources describe how both King Philip II and King Charles II (a big fan of hot chocolate) were gluttons, and Madrid’s food thankfully hasn’t forgotten about the sweet side of things. Churros, made from a mixture of water, flour, olive oil and salt, are one of the city’s biggest draws at breakfast or for an afternoon snack, and must always be accompanied by a good cup of hot chocolate so you can dip the churros or porras (a larger and doughier variation) without any fear of making a mess. Chocolatería San Ginés, next to Plaza Mayor, is the most traditional place to sample them, serving 2,000 cups of hot chocolate and 10,000 churros a day.

If one of the secrets of the Mediterranean diet is having five meals a day, then there is more than enough time to sample all the delights of Madrid’s traditional cuisine. Just remember not to count the calories. 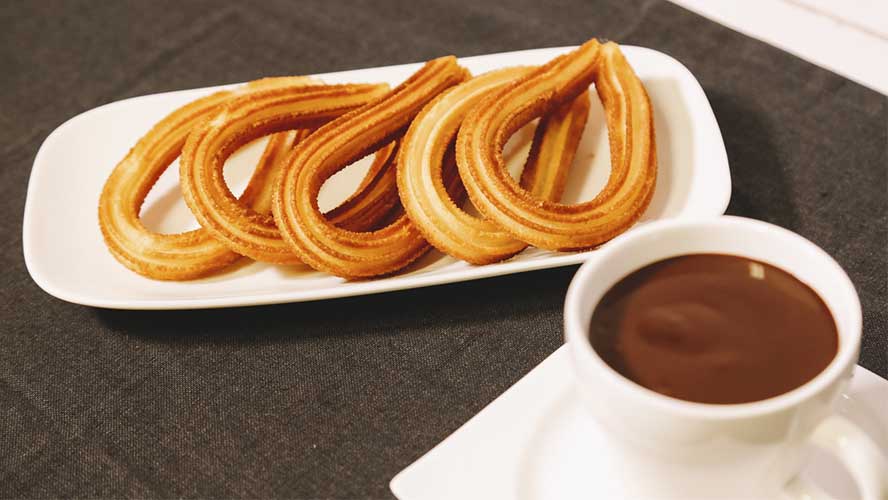 You will also find the restaurant Eat&Roll and the lobby bar Studio32, where you can order savoury rice and pasta dishes, or even huevos rotos, pizzas and sandwiches. 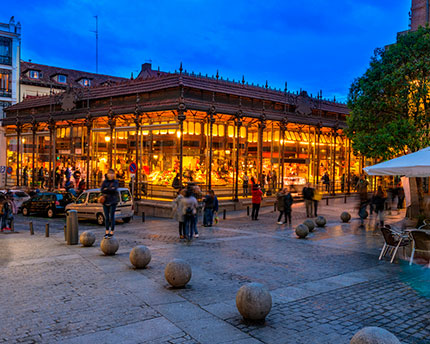 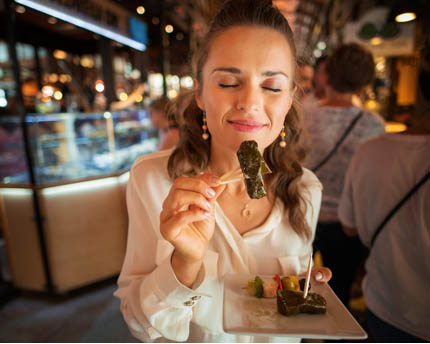