The Puerta de Alcalá, an honourable witness to the past</span

Thanks to its central location and its position next to the Parque del Retiro, it is impossible for the Puerta de Alcalá to pass unnoticed. This monumental composition, dating from 1778, was one of the five royal gates that provided access to the walled city of Madrid. Its name derives from the fact that it faced in the direction of Alcalá de Henares. Its privileged location is on the Plaza de la Independencia, an important communication hub that lies at the junction of such historic streets as Calle Serrano, Calle Alcalá and Calle Alfonso XIII.

The history of the Puerta de Alcalá actually pre-dates its construction, as it was built on the site of an earlier, sixteenth-century gate. It seems that Charles III took a dislike to the appearance of the previous entrance and decided that it should be replaced. The king, known as “Madrid’s best ever mayor”, decided that another, more imposing monument was needed and that the new gate should have five spans, as opposed to the three of its predecessor. We should not forget that the purpose of the royal gates was to allow access to the walled city. This means that originally they were not archways but gates with bars that were shut during the night to prevent criminals getting through. During the winter, they closed at 10:00 PM, and during the summer, they stayed open for an hour longer.

The competition held for this important undertaking attracted professionals of the calibre of Ventura Rodríguez and José de Hermosilla, but the project was ultimately entrusted to the Italian architect, Francesco Sabatini, who also had a hand in the design of the Royal Palace. This great Italian-style triumphal arch was built using granite from Segovia and, for the decorative features, limestone from Colmenar de Oreja was used.

The monument consists of three sections (those on either side being lower than the central section), with five archways. Three of the five are rounded archways large enough to allow carriages to pass through. The other two (smaller archways with lintels) were for pedestrians. Over the main archway is a Latin inscription which reads: “Rege Carolo III. ANNO MDCCLXXVIII”, i.e. King Charles III, in the year 1778. 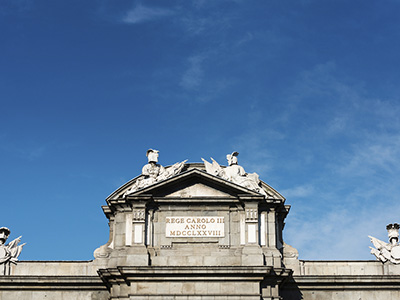 It is a curious fact that the two façades are not identical. Among other differences, the decoration on one façade shows the four Virtues (Prudence, Justice, Temperance and Fortitude) while the other, which originally faced outwards from the city, has a greater array of ornamentation and also displays the royal shield. According to historical records, Sabatini presented three sets of plans to Charles III, with two different models, one with pilasters and another with engaged columns; the end result was a combination of the two. The design was patently influenced by the doorways of Rome’s Barberini Palace and Fuente dell’Acqua Paola.

The Puerta de Alcalá was the first triumphal arch to be erected in Europe since the fall of the Roman Empire. The monument has survived the passage of time well and, thanks to successive widening projects, is now an essential feature of the city. The only perceptible damage is the shrapnel marks, a souvenir of the not-so-distant past, left by confrontations with French troops in 1808, and then in 1823 by the war of the Cien Mil Hijos de San Luis [One Hundred Thousand Sons of St Louis—a French army mobilised by the Bourbon King of France, Louis XVIII]. In recognition of its worth, it was declared a National Monument in 1976.

A gate with a popular song

Little could the Spanish singers Ana Belén and Víctor Manuel have imagined that the song they dedicated to the Puerta de Alcalá would become such an enormous hit. Included on an album released in 1986, entitled ‘Para la ternura siempre hay tiempo’ [There is always time for tenderness], the song’s lyrics summarised the history of the monument and that of Madrid itself. Even today, there must be few Madrid inhabitants who do not know the ending to this verse: “Ahí está ahí está, viendo pasar el tiempo… la Puerta de Alcalá” [There it is, there it is, watching time go by… the Puerta de Alcalá].

The song mentions certain important events that have taken place since the monument was built, but does not mention them all. Other events witnessed by this great Madrid monument in the past few centuries are the funeral of Benito Pérez Galdós, whose coffin set off from here on its journey to the Cemetery of La Almudena accompanied by 20,000 people; or the shooting of Eduardo Dato, President of the Council of Ministers and Mayor of Madrid, in 1921.

During the Civil War (Madrid was loyal to the Republic), propaganda posters were attached to the gate, a very different “decoration” from that which appeared during its restoration project in 1993, when it was covered with a huge canvas with a drawing by the cartoonist Antonio Mingote. It was also the site chosen for the reception of Pope Benedict XVI in 2011. Fittingly, as the occasion was also the twenty-sixth World Youth Day, the pontiff entered through the gate accompanied by youngsters from five continents.

The gate is also regularly illuminated in different colours on important Saints’ Days or other auspicious dates. For example, on St. Patrick’s Day (the patron saint of Ireland), the Puerta de Alcalá is lit up in emerald green. 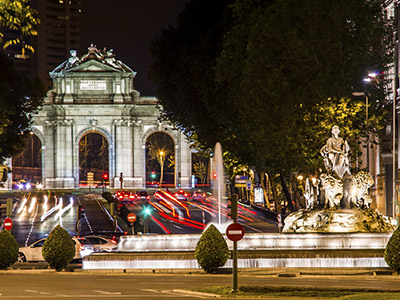 Around the Puerta de Alcalá

The Puerta de Alcalá is a perfect starting-point for a day’s sightseeing in Madrid. Around the Plaza de la Independencia, there are iconic locations including the Parque del Retiro, the great green lung of the capital. Here visitors can stroll along its many paths, see art exhibitions and even take a boat trip on the lake. Just a five-minute walk in the direction of the Puerta del Sol brings you to the Plaza de Cibeles, home to the Fuente de Cibeles and the Palacio de Cibeles, two other unmissable icons.

It is also a good place to begin a tour of some of Madrid’s most exclusive shopping streets. Shopping in Calle Serrano, Calle Velázquez, Calle Claudio Coello or Calle Goya is only a few minutes’ walk away. This area also has a number of restaurants and snack bars well worth visiting.

In the vicinity of the Puerta de Alcalá, it is also interesting to visit some of the art centres such as the Casón del Buen Retiro or the Museo de Artes Decorativas, one of those places that can still be considered a well-kept secret, away from the tourist hordes. And, a few minutes further on, is the Museo Naval, another place that passes unnoticed, but which displays life-size boats and a wide range of exhibits connected with navigation.

The Puerta de Alcalá is so much more than just a gate: it is an excellent departure point for a tour of Madrid’s most venerable streets and edifices.

How to arrive to the Puerta de Alcalá