Backing onto the Paseo del Prado (the site of Madrid’s most important museums), and with an area of almost 118 hectares, the Parque del Retiro now enjoys the status of being the green lung of the city. Conceived in the early seventeenth century as the royal garden for the Palacio del Buen Retiro, which has since disappeared, the history of its subsequent development serves as a supreme symbol of the decline of the absolute monarchy in Spain. It is also a treasure trove of stories and mysteries which will bring out the adventuring spirit of anyone who strolls through it. For example, few people know that it was in this public park that Napoleon’s troops built a makeshift barracks during their capture of Madrid in 1808. Or that its famous Estanque Grande (Lake) on which the boats sail, was at one time the site of the legendary naumachias—mock naval battles—held to entertain the monarchs. Because of the multitude of architectural works and sculptures and its natural scenery, El Retiro has since 1935 been recognised as an Asset of Cultural Interest. Its outstanding features include the Monument to Alfonso XII, the Crystal Palace, the Parterre, and the 19,000 or more trees from 170 different species. Despite the passage of time, the park has never failed to live up to its name. It continues to be a place of relaxation for Madrid residents and visitors alike, an accessible oasis where people can splash their faces with cool water from its fountains or lie down to rest in the shade of a fruit tree, all with the sound of Madrid life humming away in the background.

The Parque del Buen Retiro, a kings’ flight of fancy

In the early seventeenth century, when Spain was still ruled by the Habsburg dynasty, we know that the only building standing on the site of the Prado was the Monastery of the Order of St Jerome. Annexed to this church were some royal apartments, used regularly by the monarchs as a place of retreat and relaxation. It was the Count-Duke of Olivares who, in an effort to gain favour with King Felipe IV, encouraged the monarch to build a summer palace and Italian-style gardens all around the apartments. To this end, he gave the King some land near his property, with the result that between 1630 and 1640, the palace known at the Palacio del Buen Retiro was built and presented to the King. At the end of the day, it was an attempt to demonstrate to the world the power once wielded by the Spanish monarchy.

The later ascent to the throne of the Bourbon dynasty brought, throughout the eighteenth and nineteenth centuries, new additions and improvements to the space, almost always reflecting the changing tastes of the current reigning monarch. The Estanque Grande and the Parterre, both still in existence, reflected the aesthetic tastes of Felipe V, while Carlos III stamped his own character on the Retiro with the building of institutions dedicated to scientific advance. In the place now occupied by the gloomy fountain of the Fallen Angel—which just by chance is located 666 metres above sea level—there once stood La China, a porcelain factory whose products were said to be on a par with English porcelain. This particular King should also be credited with other projects such as the Astronomical Observatory, the Centre for Natural Sciences and the Botanical Garden, as well as with the unusual step of allowing the people of Madrid to access the park’s gardens for the first time in the city’s history. 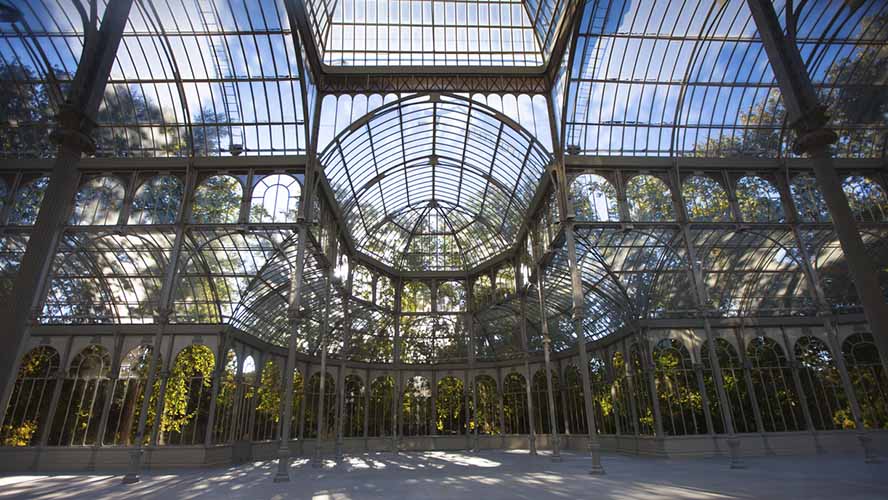 The Retiro during a time of war

As this was at the time one of the highest points in Madrid, Napoleon’s forces chose the Retiro as the site of their general barracks during the invasion in 1808. Within the space of a week, a detachment of two thousand men occupied the Palacio del Buen Retiro and its vicinity, and swiftly set about indiscriminately felling and burning trees. It is even said that Marshal Murat used to send his soldiers to catch fish from the lake for his dinner. Perhaps the greatest damage, however, was that suffered by the Royal Porcelain Factory. Used as a gunpowder store by the invading troops, the factory was later bombarded by the English while they were fleeing in the face of a renewed siege by the French.

The summer palace and the gardens also suffered significant damage, so that by the time Fernando VII returned from exile, the royal estate was in a wretched condition. What had been the emblem of the absolute monarchy for two centuries was now reduced to ashes and rubble. Of the Palace itself, only the Casón and the Salón de Reinos now both annexes of the Prado Museum were conserved, with most of the attention being focused on the gardens themselves. Places we can still visit that date from that time are the Casita del Pescador [Fisherman’s Cottage], the Casa del Contrabandista [Smuggler’s House], the Montaña Artificial [Artificial Mountain] and the Casa de las Fieras [House of the Wild Beasts] which, not so long ago, was home to tigers, lions and Pizarro, the famous elephant.

A Madrid Park for all to enjoy

During the reign of Isabel II, the Retiro benefited from several tree replanting programmes, and some of the many statues or kings were relocated from the Palacio de Oriente into what became known as the Paseo de las Estatuas, and is now called the Paseo de la Argentina. However, it was the Revolution of 1868, popularly known as La Gloriosa, that finally stripped the Crown of the Retiro estate, and made it permanently into a park for public recreation under the name of Parque de Madrid, a name no longer in use. As an explicit sign of the collapse of the Old Order, the following year the remains of the Palacio del Buen Retiro were demolished, and this age of municipalisation brought with it new and highly attractive architectural styles. For example, the Palacio de Cristal and the Palacio de Velázquez, both built as settings for international exhibitions, were in tune with the contemporary European vogue. 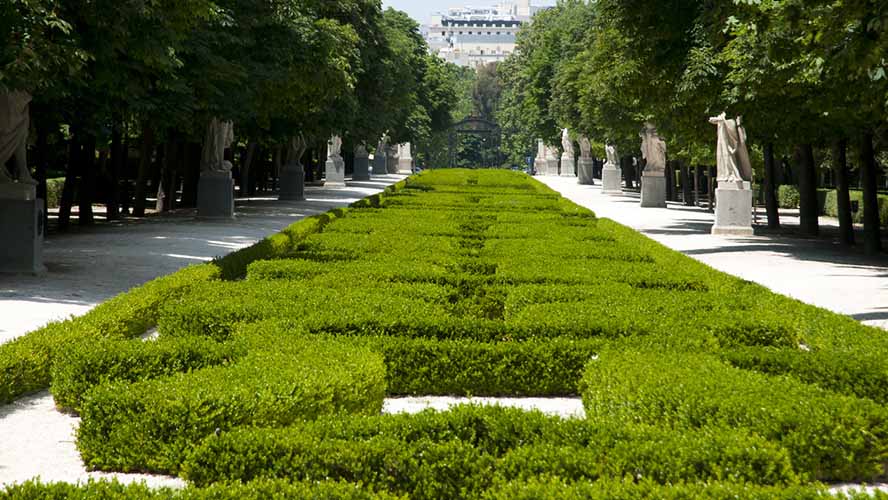 The present-day Retiro: activities and leisure

Nowadays, the Retiro is a very diverse blend of culture and leisure, art and sport, all in a natural setting unrivalled by any other in Madrid. The opportunity to see theatrical, dance performances or to hear street entertainers also provides the chance to go for a pleasant sailing trip around the lake or to climb up to the viewing point of the Monument to Alfonso XII, which recently reopened after more than thirty years of lying idle. Visitors can also enjoy the Senda botánica del Retiro [Retiro Botanical Trail], an eight-kilometre tour of over eighty species of trees. Alternatively, visitors can stop off at the Biblioteca Pública Municipal Eugenio Trías [Municipal Public Library]—which occupies a former cage in the Casa de las Fieras—or the previously mentioned Palacio de Cristal, an architectural jewel in its own right, now used as an exhibition centre by the Museo Reina Sofía.

How to arrive to El Retiro

To find out more about Madrid’s Parque del Retiro, we recommend you visit the following website: