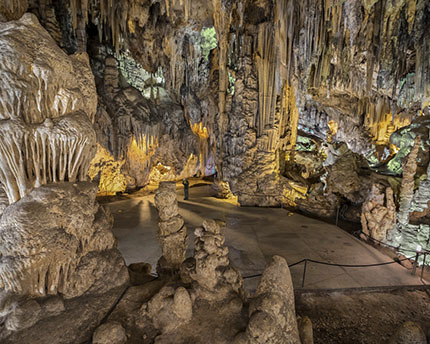 A visit to Cuevas de Nerja is an adventure that transports us to another world, dazzled by the treasures that they enclose. The Caves of Nerja (link interno) are one of the largest in Andalusia and are considered a Natural Cathedral on the Costa del Sol. They were discovered by a group of children chasing bats among the rocks. Thanks to them, we can visit these caves and unveil the treasures they hide.

With three entries, the caves float 158 metres above sea level. The entrances are two subcircular depressions, and one enabled for the visits. The tourist gallery offers spectacular cavities with stalactites, stalagmites, columns, rimstone and soda straws. It boasts the world’s longest stalactite with a height of 33 metres, located in the Cataclysm Hall. The Upper and New Galleries, which are not open to the public to guarantee their conservation, have almost 600 cave paintings of seals and goats from the Palaeolithic period. A goat painting has been converted into the logo of the cave.

When you are on the tourist gallery tour, you will go through several halls:

Where to eat in Cuevas de Nerja

A large restaurant with buffet service at the entrance is only one of the many services the cave offers its visitors. It is a panoramic terrace that looks towards the Mediterranean, and its spectacular views make it an ideal place to take a break. You can also take your own food to have lunch in the fantastic picnic area surrounded by squirrels, pine trees and gardens, which is fully equipped with tables, benches, shadows and a children’s playground.

A walk through the gardens will take you to the Hermitage of San Isidro, along a path that is about 800 metres long. The Hermitage is a chapel dating back to the mid-nineteenth century, which preserves engravings made by shepherds, according to tradition. Every year, on 15 May, a pilgrimage is held.

There are several ways to visit the Nerja Caves. Citizens of the European Union can take advantage of a free visit from Monday to Friday at 9:30 AM. It is an opportunity to visit the cave at no cost, although you do have to book in advance online. If you really want to understand everything that the caves hide and their importance, we recommend you join the guided tour, which is given by specialists in the field, or at least take a tour with an audioguide.

Very special after-hour visits are also on offer. The ‘Secrets of the Cave’ visit is led by the famous Tito (Miguel Joven), from the TV series Verano Azul; he teaches the lucky group about the importance of this cave and its discovery. But it is advised that you buy your tickets in advance on the web.

One of the best ways to get to the cave is to catch the Cave Train, a tourist train that takes visitors to the main sites, including the cave, the Barco de Chanquete and the Nerja Museum.

The museum takes the visitor on a tour through the whole history of Nerja, from the Palaeolithic period, with multimedia shows and original pieces. The museum offers guided tours adapted to each group. There are also activities, theatre shows, concerts and workshops.

The museum’s permanent exhibition comprises five rooms with archaeological pieces, historical documents and models that are complemented with audiovisual material. The visit begins with four main products from the town of Nerja: textiles from the Neolithic period, garum (Roman fish sauce), silk from the Nasrid kingdom and sugar cane from the Middle Ages to the twentieth century.

The visit focuses on the importance of land and sea for the town. Don’t miss an area dedicated to one of its most illustrious figures: Manuel Centurión. And of course, the area dedicated to the discovery of the Cave and the Verano Azul series.

The cave was opened to the public on 12 June 1960, with a Music and Dance Festival for the inauguration, and since then it has become an annual celebration in which the most popular artists of the moment participate. To preserve the cave, most of the concerts are held outside.

Recommended for the visit: Comfortable footwear with non-slip soles and warm clothes due to the low temperatures inside. 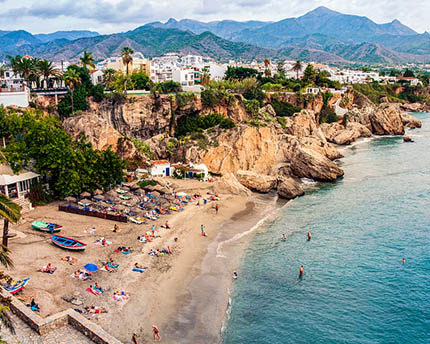