It would be hard to imagine Valencia without the Jardí del Túria gardens today as, three decades on from their inauguration, they have become essential to life in the city. They’re a green lung. This is a space where kids chase balls, older people read their newspaper in the sun, and families take strolls with their pets. At the same time, the Jardí del Túria gardens are a strange sight for anyone who’s new to the Valencian capital. Visitors might well be disorientated by the way the bridges, built to span the river, now arch over football fields, athletics tracks, cafés or children’s parks. Are you ready to discover Spain’s largest urban park? Read on for all the details!

The importance of the River Túria to Valencia

The great flood of Valencia, on the 14th October 1957, was what drove the authorities to divert the course of the Túria to the south of the city. Floods had always been frequent, but the flood of 1957 left more than 80 dead and caused significant material damage. The tales and the images from the time are shocking. In fact, some of the city’s streets still have plaques that mark the height that the water reached on that dark day for Valencia.

The Túria was diverted between 1965 and 1969. It led to a heated social debate about how this newly created space, which wound through the city, bordering its historic centre, should be used. On the one hand, the local and state authorities argued the case for the creation of a road that would connect the port and the airport. On the other hand, the locals fought tooth and nail for the space left by the river to be declared a green area for the use of the city’s residents. That’s how the slogan “el riu és nostre i el volem verd” (the river is ours, and we want it green) was born. It represented an important social movement that got its way and became an example of how the mobilisation of the citizens can contribute to making a city more liveable.

Some of the best urban and landscape designers of the time worked on the Jardí del Túria project. Ricardo Bofill, the architect from Barcelona, stands out amongst them. It was he who described this linear park as a “composition that uses the symbolic power of different rhythms, loosely based on Moorish gardens”.

Today, the course of the river is divided up into 12 sections, covers more than 100 hectares and is seven kilometres in length. You’ll find a wide variety of plants, including orange trees, palm trees and rose bushes, amongst many others. What’s more, if you take a stroll through this stunning green lung, you’ll find historic buildings, ponds, small maze-like gardens, areas for kids, romantic corners and eateries with pleasant terraces. 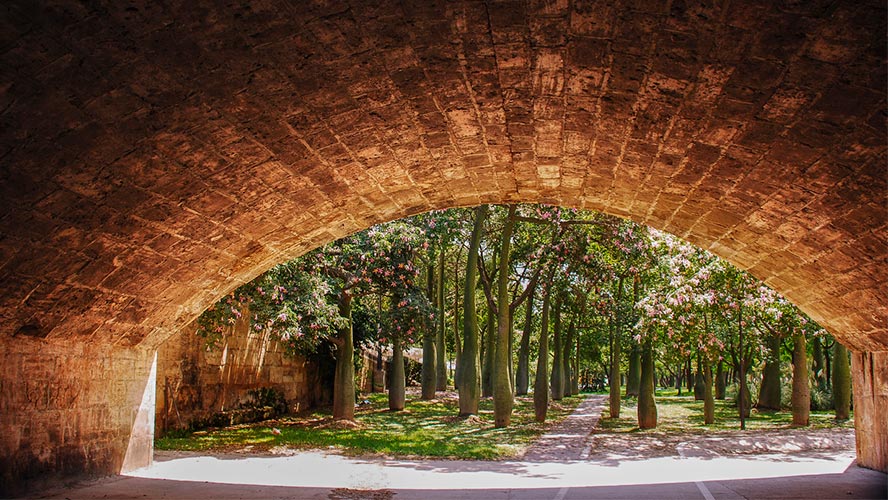 What to do in the Jardí del Túria

With the diversion of the river, the Valencian capital gained an ideal space for relaxing and exercising, right in the heart of the city. Its seven kilometres of length make it a favourite with runners, cyclists, and anyone who enjoys walking. Its sports facilities include football fields, rugby pitches, baseball fields and athletics tracks, as well as skate parks and even mini golf courses. 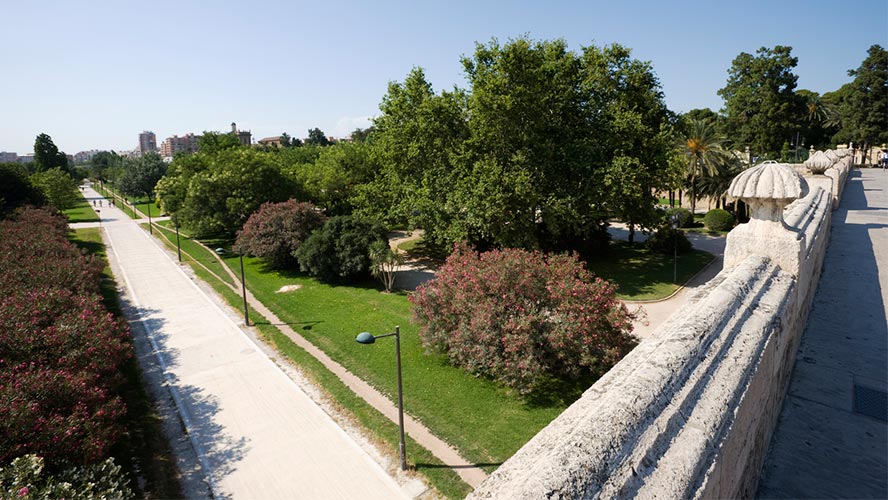 That means that the Jardí del Túria gardens are a great option if you want to stay active during your holiday. They’re also a fantastic space for a stroll to see some of the city’s most iconic landmarks, like the Torres dels Serrans or the Ciutat de les Arts i les Ciències [City of Arts and Sciences]. And, weather permitting, don’t miss out on the opportunity to enjoy a coffee or beer whilst basking in the sun on one of its terraces. Revel in the luxury of the Mediterranean climate.

What to see in the Jardí del Túria

The Jardí del Túria gardens are the perfect place for running, cycling, taking a romantic stroll, or spending a day playing with the children. Discover Spain’s largest urban park! 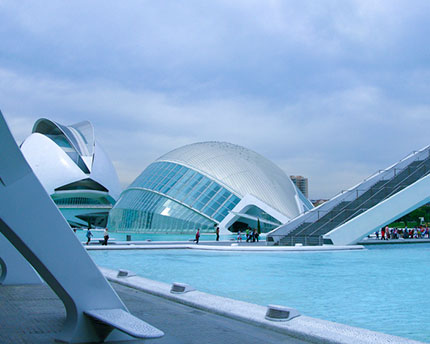