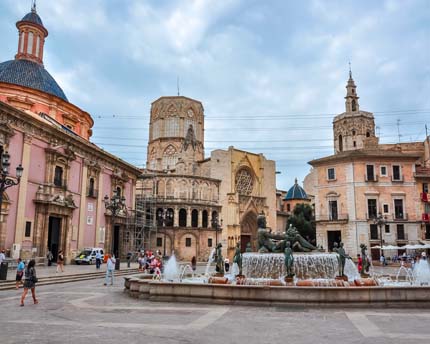 Plaça de la Mare de Déu, also known as Plaza de la Virgen, is one of the most beautiful and emblematic squares in the city alongside Plaça de l’Almoina and Plaça de la Reina. It’s located in the very heart of the city in a strategic location where the Roman Forum once stood, so let yourself be inspired by the passing of the ages and swept up by centuries of history. Today, this pedestrian square invites passers-by to pause on one of its stone benches or stop for a drink on a café terrace; in the background you’ll hear the sound of children playing, water running in the fountain and the fluttering of pigeons making themselves at home. But above all, visitors come to here to admire the monuments.

This square in the La Seu neighbourhood in the Ciutat Vella district [Old Town] is named after the patron saint of Valencia, Mare de Déu dels Desemparats [Our Lady of the Forsaken]. The basilica dedicated to the Virgin has a spectacular façade and dominates the public area of this irregular square. Every year during the Falles festivities the people of the city visit the basilica to make a mass offering of flowers in tribute to the patron saint of Valencia.

The famous Porta dels Apòstols [Door of the Apostles] of Valencia’s Santa Maria Cathedral can be seen from the Plaça de la Mare de Déu and while in the square you can also appreciate the Casa Vestuari, the Palau de la Generalitat Valenciana and several buildings in the Academic style. As an aside, just four minutes away from the square on foot, at no. 22 Carrer dels Cavallers, you’ll be surprised to discover a unique museum that has the largest private collection of lead soldiers in the world.

Returning to the square, one of its most famous attractions is a vast fountain dedicated to none other than the Túria river itself. The allegorical sculpture portrays eight nude female figures who pour water from pitchers and symbolise the eight acequias or channels that irrigate the farmland around the city of Valencia. Father Túria is in the centre and the fountain, the work of sculptor Manuel Silvestre Montesinos, was unveiled in 1976.

From Valencia Cathedral to a separate church

The Basílica de la Mare de Déu dels Desemparats proudly overlooks Plaça de la Mare de Déu. It’s joined to the cathedral by a passageway above a Renaissance arch that can only be used by members of the religious community who care for the temple. The church was built in the seventeenth century, between 1652 and 1667, to continue the cult of paying tribute to Our Lady of the Forsaken that began in the Middle Ages in a cathedral chapel. The basilica became the first Baroque building to be constructed in Valencia. It’s also said that it was built by the people of Valencia to express gratitude to the Virgin for ending the plague that had spread like wildfire in 1647. 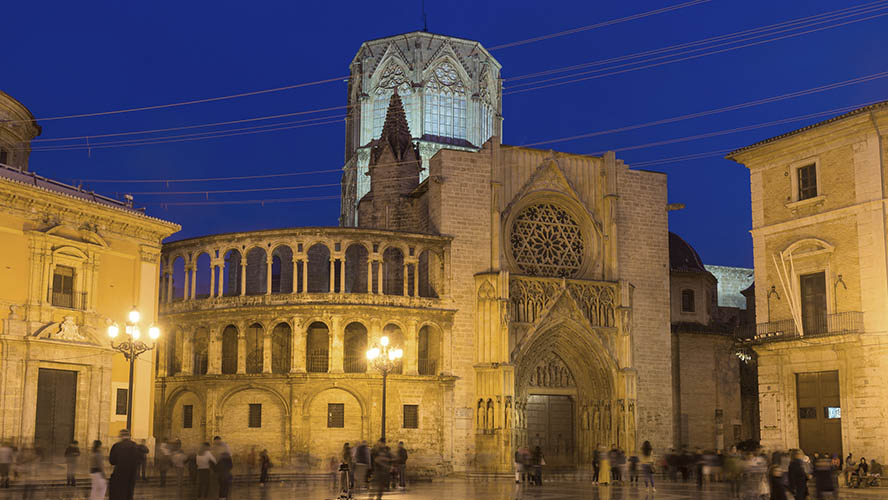 The architect of this impressive basilica was Diego Martínez Ponce de Urrana. Born in Requena, he was responsible for deciding to build the church from white Godella stone and locally made brick. Both the dome, which is almost 20 m in diameter, and its small tower are covered in red, blue and white ceramic tiles.

Weddings with the patron saint of Valencia

There are several good reasons for visiting the interior of the Basílica de la Mare de Déu dels Desemparats. First, to appreciate its unusual oval-shaped floor plan and admire the walls decorated with marble pilasters and medallions painted by José Vergara in the nineteenth century. The dome also contains a remarkable fresco dating from 1701 by Antonio Palomino, court painter to King Charles II.

Make sure you cast your eyes up to the high altar to admire the gold Gothic sculpture of the patron saint of Valencia. Just don’t be surprised if you encounter a wedding beneath her feet—couples often decide to get married beneath the gaze of Our Lady of the Forsaken to guarantee her protection. Note: if you attend Sunday mass at 1:00 PM you can enjoy listening to the Escolania children’s choir.

The Water Tribunal and its thousand-year history

The Plaça de la Mare de Déu has another unique building: the Casa Vestuari, today home to the Carles Ros municipal library. This old stately mansion dates from 1800 and bears the coat of arms of Valencia. It’s worth popping into its entrance hall to admire the spectacular Modernist staircase that leads to a room decorated with frescoes by Vicente López.

Casa Vestuari was where the eight members of the famous Tribunal de les Aigües [Water Tribunal] used to meet before their public rulings—these are still held on Thursdays at 12:00 PM at the Porta dels Apòstols of the Cathedral. This tradition has been practised for thousands of years and was a way of orally settling disputes concerning the water used to irrigate the farmland around Valencia. These rulings are a spectacle in themselves and attract a large number of curious onlookers. The tribunal members who pass sentence aren’t judges by profession but their decisions, made while dressed in typical farm workers smocks, are respected and obeyed by all. The members are chosen democratically every two years. 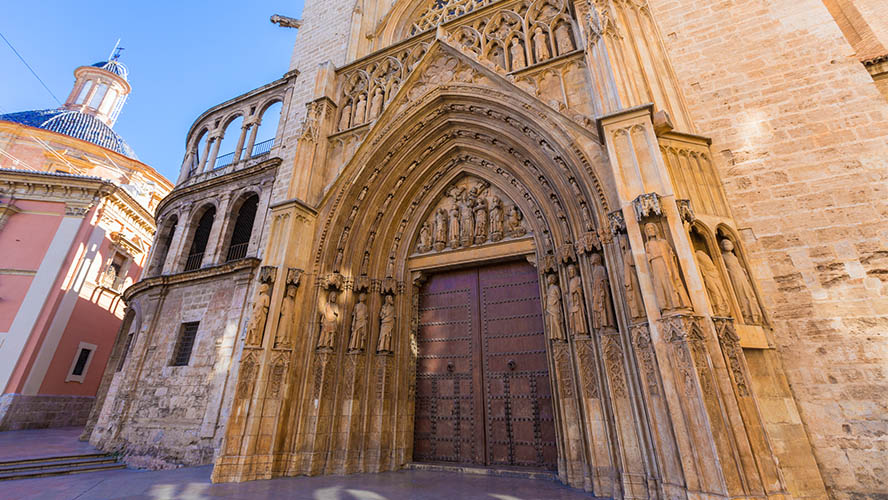 While on the subject of the Porta dels Apòstols, the cathedral gateway that leads to the Plaça de la Mare de Déu, the ‘Door of the Apostles’ was named after the sculptures of the apostles who decorate its jambs. It was built in the fourteenth century and if you look closely at its three archivolts you’ll spot a series of saints, prophets and angels. They are joined by the Virgin and Child who are portrayed in the tympanum with a host of angels playing stone instruments.

You can’t bid farewell to Plaça de la Mare de Déu without taking in the fantastic view of the square from the cathedral bell tower, which stands 51 m tall and is now an icon of the city. El Micalet has four floors and was built between 1381 and 1424, although the bell gable dates from 1727. It’s octagonal in shape and is named after the main bell, which was baptised Micalet (Michael) because it was blessed on the feast day of Saint Michael the Archangel. There are a further 11 bells in the tower and each one has its own name. The views from the top are spectacular but to enjoy them remember that you’ll have to climb up 207 steps. Interestingly, El Micalet was originally a free-standing tower and was joined to the cathedral at a later date. 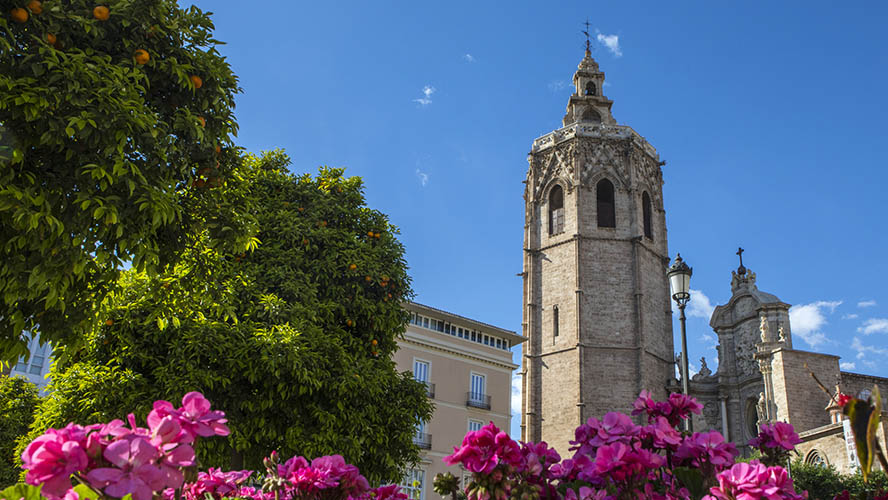 So if you’re travelling to Valencia, make sure to visit the Plaça de la Mare de Déu for its monuments, beauty and long history lasting from the Roman Empire to the present day. 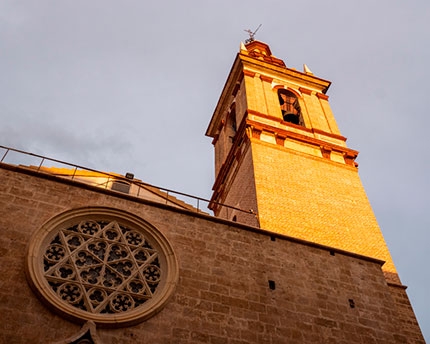