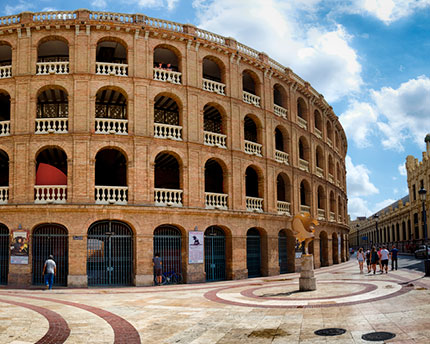 Valencia’s love of bullfighting goes way back. Since the eleventh century, it is known that bullfights were improvised on Plaça del Mercat and other spaces in the city, setting up improvised bullrings during certain periods such as the Falles Festival, the July Festival and Christmas. Over time, a passion for bullfighting grew to such an extent that removable seats were not enough. And so, in the late eighteenth century, a permanent ring was built outside of the city walls, next to the Russafa Gate. The first attempt lasted less than a few years: in 1808, during the Napoleonic Invasion, the local government realised that the building was susceptible to be taken by the enemy in the event of an attack on the city due to its location next the old wall, and so it was demolished. Finally, on the site of the ruins of the first building, the Plaza de Toros de Valencia bullring that we know today was built in the 1850s.

Although the initial project was enormous—147 metres in diameter—it was eventually reduced to 98 metres in diameter, with a ring spanning 52 metres, making it one of the largest in Spain. Built in Neo-classical style and inspired by great Roman engineering works, its brick façade—with three upper galleries and 384 exterior arches—resembles a coliseum dedicated to bullfighting, with capacity for 12,800 spectators. The bullring was designed by the Valencian architect Sebastián Monleón Estellés, and opened on 22 June 1859 by the bullfighter Francisco Arjona ‘Cúchares’—the first day of 160 years of history replete with great spectacles.

A bullring owned by a hospital?

One of the most striking things about the bullring is that it is owned by the General Hospital of the University of Valencia, although it is managed by the General Provincial Government and a private company. The matter can be traced way back in history. In 1625, sensing the great business potential that bullfighting had in the city, the board of the Valencia Hospital requested the privilege of managing the activity from King Philip IV. The monarch agreed on the condition that the income was used for the maintenance of hospital facilities and to care for the sick, as the hospital had proposed. The royal decree was extended every 20 years until King Philip V granted, in 1739, the hospital ‘the perpetual privilege, grace and mercy for all the bullfights held within the city, in the two bullrings on the outskirts and in the places of particular contribution, which span half a league.’

Thus, it was the hospital together with the authorities that would run the two permanent bullrings that Valencia has had. And, up to the present day, nothing or no-one has taken the perpetual privilege away from Valencia’s General Hospital, probably the only health institution in the world that has been organising bullfights for four centuries.

Events straight out of the history books

Fans of bullfighting conjure up images of many glorious afternoons at the one-hundred-year-old Valencian arena, such as the ‘patriotic bullfight’ that was organised in May 1898 to raise the spirits of a nation hit by the loss of the last colonies of the Spanish empire, or the farewell, in 1893, to the great bullfighter of the time ‘Lagartijo’.

Great bullfighting passes, such as the chicuelina, have come from Valencia’s bullring, invented one afternoon in April 1922 by the Seville-born Manuel Jiménez Moreno ‘Chicuelo’. It was also at the bullring where renowned names became fully fledged bullfighters, such as Curro Romero, in 1959, and two members of the Ponce dynasty: Rafael Ponce Navarro, in 1935, and his grandnephew Enrique Ponce, who debuted at the ring in 1990.

A walk around the bullring can be topped off by a visit to the bullfighting museum, situated in front of the city’s Bullfighting School, which traces the evolution of Valencian bullfighting from the eighteenth century.

Founded in 1929 with items donated by the bullfighting collectors Luis Moróder Peiró and José Bayard Badila—who was also a picador [the name for one of the horsemen who jab the bull with a lance]—the centre houses some 3,000 pieces including photographs, posters, documents, old costumes, bullfighting equipment and bullhead taxidermy, although only 300 are exhibited. Its permanent exhibition explores the history of the fighting bull, bullfighter training, liturgy associated with the bullfighting world and the evolution of Valencia’s bullring. It also offers temporary exhibitions, a specialised library and a video library.

Over the last two centuries, not only bulls have graced the bullring. The site has also hosted other popular activities such as the burning of the falles, operas, theatre productions, film screenings, concerts and sporting events. Over just the last three years the bullring has played host to the Falles Festival, a tourist fair, a wrestling tournament, performances by musicians such as Alejandro Sanz, Enrique Bunbury and Joaquín Sabina, and the Davis Cup in 2018.

Its saddest function was during the Spanish Civil War when the building was used as a prison and concentration camp and where executions by firing squad took place.

How to get to the Plaza de Toros de Valencia 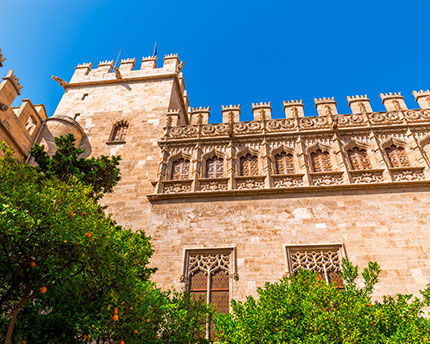