The Mercat Central [Central Market] is undoubtedly one of the most attractive buildings in Valencia. Apart from its fantastic design, it’s also one of the best places to buy a huge variety of food products that will delight your taste buds.

The aisles of the Central Market throng with local residents from the centre of Valencia, who come here to do their daily or weekly shopping, and a large number of tourists attracted by the beautiful building and the chance to soak up the local vibe among its stalls.

And naturally, visitors come to admire and buy some of the products on sale. The market primarily focuses on fish and seafood but also has delicious fruit and vegetables that are grown in the farmland around the city of Valencia, plus other products from more far-flung destinations.

Before the distinctive Mercat Central de València was built, an uncovered market had been held on the same site since 1839. However, by the end of the nineteenth century it had become too small to stock sufficient fresh produce for the booming city.

Valencia City Hall therefore decided to construct a covered market for the city, similar to those being built in other cities around Spain, like Barcelona and Madrid.

Architects Alexandre Soler i March and Francesc Guàrdia i Vial submitted the winning design for the market construction project. They had previously worked with Lluís Domènech i Montaner from whom they learned the foundations of the Modernist style. Work started in 1910 and was finished by architects Enrique Viedma and Ángel Romaní in 1928.

In 2004, the market underwent a total refurbishment by architecture studio Fernández del Castillo Arquitectos. The aim was to repair parts of the building that had been damaged over time and through use, and to update the trading business of the market and part of its facilities.

Valencia’s Central Market is a brick, iron, ceramic and glass building with a main dome that is 30 metres high. Its architecture draws from the Modernist and Rationalist styles.

Stalls run along the length of several parallel aisles that are intersected by two wider aisles. Each aisle is named after a local artist or intellectual: Benlliure, Blasco Ibáñez, Sorolla, Luis Vives, García Berlanga and architect Enrique Viedma.

In some ways, the Central Market was envisaged as a type of temple where people could come to worship the products sold inside. This explains the profuse ornamentation and a structure reminiscent of Christian temples. It also explains the shape of the skylights. In fact, light enters through the central dome and its stained glass windows, casting an almost spiritual light into the building’s interior.

Turning to the exterior of the market, the geometry of the triangular-shaped main façade is particularly eye-catching. Also make sure you don’t miss the unusual shapes that feature in the weathervanes on top of two of the domes: a parrot and a swordfish.

What to buy and where

There are over 300 stalls inside Valencia’s Central Market. They mainly sell food and each one specialises in a certain type of product. However, after the market was refurbished at the beginning of the twenty-first century, new places have opened next to the traditional businesses, including gourmet food stalls and bars where you can enjoy tapas, wine and coffee.

The market stalls can be grouped into these main sections:

There are also non-food sections with stalls selling souvenirs, jewellery, leather goods and there is even an ironmonger.

Some recommendations for the Central Market

As you can see, food options in the Central Market are almost endless. But there are some stalls that stand out from the rest for the quality of their products or originality: 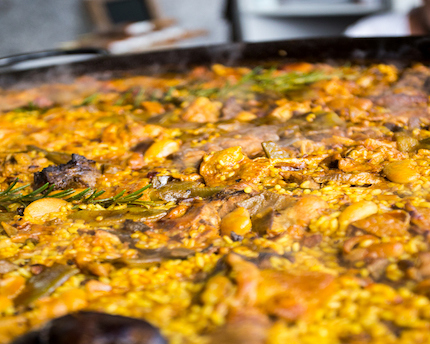