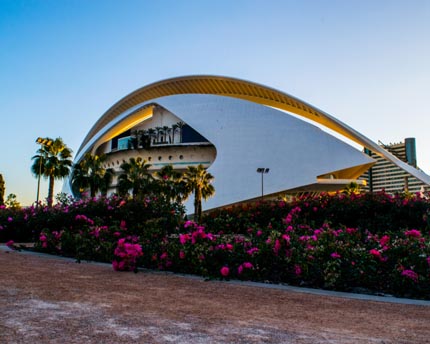 The Palau de les Arts Reina Sofia is one of the five spectacular edifices that make up the Ciutat de les Arts i les Ciències [City of Arts and Sciences] complex. The work of the Valencian architect Santiago Calatrava, it opened in 2005, and is a vast cathedral of music with opera, theatre and dance performances.

Its shape resembles the keel of a boat, a reminder that the building is located on an actual riverbed. To many visitors, however, it looks more like the helmet of an Imperial stormtrooper from Star Wars. In any event, there can be no doubt that it seems to float on the 10,000 m2 of water surrounding it.

Located opposite the Barceló Valencia Hotel (link Interno), it is the largest building in the Ciutat de les Arts i les Ciències complex—and Santiago de Calatrava’s boldest venture yet. It is 70 metres tall and has a surface area equivalent to four football pitches. Its white concrete structure includes projecting platforms of varying heights accessible via panoramic lifts and stairways inside metal casings. The most remarkable feature is the feather-shaped metal outer-casing which is only attached to the main building at two points, so that the whole area is overhanging. This “feather” is over 230 metres in length.

The two frameworks that hug the building consist of 3,000 tons of laminated steel clad in a mosaic made from fragments of glazed ceramic—the trencadís technique previously used by Gaudí and the Modernist movement. This huge building is at the same time both loved and hated by Valencia’s citizens, as it incurred a budgetary overspend of 45 million euros, and in its short life it has suffered structural problems.

The project started out as a telecommunications tower, and with this in mind, work began to lay its foundations and base. The work was then stopped, and it was decided to build in its place a temple of music, using the foundations that had already been laid.

Inside, the space is divided into four large areas, with a 530 m2 stage and a capacity for 1,800 spectators. There is a restaurant at the top of the building.

This is reached by a long walkway that leads to the foot of a staircase. The information desk and the box offices are at the main entrance. From here, two side corridors lead to the great vestibule of the Main Hall. The stalls are equipped with screens showing the text in different languages, so the spectators can follow the performances. The orchestra pit can accommodate 120 musicians.

The Aula Magistral provides a space for chamber music performances and social events. This space, on the building’s west wing, has a capacity for 400 spectators.

The Anfiteatro or Sala Superior is used for all kinds of shows. It has modern audio systems and large screens, and it holds an audience of up to 1,500. It was originally planned to be open to the air, but now has a roof.

The Teatro Martín y Soler, devoted to experimental performance, can seat up to 400 people, and is located in the south-west section of the building, which is devoted to the Applied Arts.

Guided visits of the Palau

Guided tours of the inside of the Palau are available, which include access to the areas where each season’s major performances take place. Visitors can also see the Centro de Perfeccionamiento de Plácido Domingo, one of the most important training centres for opera singers. The tour ends at the Galeria dels Arcs, which is the latest space to be opened, and is used to host performances. The tour will give you all the technical information about what goes into making this huge edifice a unique performance venue.

If you’d like a deeper insight you can, during your visit, watch a 30-minute rehearsal of the current operatic production. Consult the programme to check whether a rehearsal is scheduled during your planned visit to Valencia.

Dining in a unique setting

The Palau provides various dining facilities for both audiences attending shows and for those just visiting. Without the shadow of a doubt, a visit to the Contrapunto les Arts restaurant on the top floor will prove an unforgettable experience. For either lunch or dinner, you can enjoy the creative cuisine based on a fusion of local produce with dishes from around the world—all served on the stunning terrace.

The great city of the future

The Palau de les Arts Reina Sofia was the latest building to be added to the great Ciutat de les Arts i les Ciències project, a group of five centres that collectively make up the largest urban cultural and educational complex to be built in Europe during recent years. This vast initiative—developed by the Valencian architect Santiago Calatrava in collaboration with Félix Candela—has changed the face of Valencia forever. The first building was the Hemisfèric (link Interno), which opened in 1998. It was followed by the Museu de les Ciències Príncep Felip Science Museum (link Interno), the Umbracle in 2000, and the Oceanogràfic (link Interno) in 2003. The latest space to be added was L’Àgora—the large covered square—in 2009.