Art, heritage, landscape, history, worship… Covadonga has it all. The cave of La Santina, the Neo-Romanesque basilica and magnificent glacial lakes make this area an essential destination during a trip to Asturias.

If taking your own car to Covadonga during peak season, you must park in the designated areas. Shuttle buses will take you on the rest of the short journey to the Príncipe gardens, Covadonga sanctuary and the lakes. The buses make several stops along the route.

What to see in Covadonga

The sanctuary and the Santa Cueva

The Santa Cueva or ‘Holy Cave’ sits above a waterfall that forms a pool below this sanctuary. Next to it is the Fuente de los Siete Caños (Fountain of Seven Spouts), also known as the ‘Marriage Fountain’ due to the traditional belief that any young girl who drinks its waters without stopping for breath will be married within a year. The verse goes like this: ‘The Virgin of Covadonga/ has a fountain so glassy;/ any girl who drinks its waters/ within a year will marry’.

Sitting on either side of the road, guarding the entrance to the sanctuary, are two large lions sculpted in Carrara marble. They are exact replicas of sculptures by Pompeio Marchesi.

Entering the cave housing the Virgin of Covadonga – the most worshipped image in Asturias – poses little challenge. Simply climb the 103 steps of the Stairway of Promise (some pilgrims do so on their knees). The cave can also be accessed from the basilica esplanade. Pilgrims come here to worship la Santina, which in fact is a copy of the original statue that was destroyed in a fire in 1777. The altar is adorned with images alluding to the Battle of Covadonga. Nearby are the tombs of Pelagius of Asturias and his wife Gauiosa, and those of his son-in-low Alfonso I and daughter Hermelinda.

Next to the Santa Cueva is the Monastery of San Pedro. It is home to a community of canons and also has a house for spiritual practices. 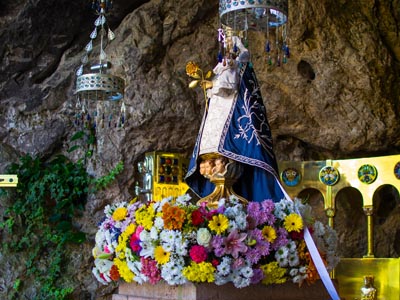 Continue your trip with a visit to the Basilica of Covadonga. Construction of the building was entrusted to Federico Aparici y Soriano by Bishop Ramón Martínez Vigil of Asturias after a failed effort by Bishop Benito Sanz y Forés. Works were completed in 1901 and the temple was given basilica status by Pope Leo XIII. Its structure is reminiscent of Norman Romanesque cathedrals: its facade has large twin towers and a portico, containing busts of the bishops responsible for the construction of the basilica.

The Basilica of Covadonga houses many works of art including two paintings of the Annunciation by Vicente Carducho, the Proclamation of Pelagius by Luis de Madrazo, and a sculpture of the Virgin with Child by Joan Samsó. Don’t forget to visit the 4,000-kilo, 3-metre tall bell, cast in 1900 in La Felguera.

After taking in the great monument raised in honour of King Pelagius, continue to the Basilica Museum situated in the former monastery school building where there is an interesting exhibition about the history of Covadonga, the historic battle, the construction of the basilica, royal visits, holy days and votive offerings, etc. Also on display are the objects and offerings comprising the Treasure of La Santina.

Complete your visit to Covadonga at lakes Enol and La Ercina. The lakes are 12 kilometres from the sanctuary and private vehicles are prohibited from driving along the road during peak season. To reach the lakes, take one of the shuttle buses that departs every 10 minutes from the station in Cangas de Onís. They stop at several points along the route.

Hiking at the Covadonga lakes

With multiple routes to choose from, this is a hikers’ paradise. For those short on time, try at least to walk the circular route that joins the two lakes (approximately 1 hour).

At 1,108 metres above sea level, Lake Ercina is muddy and teeming with aquatic life. Lake Enol sits at 1,060 metres and is 23 metres deep, and in contrast to its brother the clear waters of this lake are lifeless. If you have time, head to the Interlagos viewpoint for a spectacular view of both of these glassy lakes. Visitors in the area on 8 September can enjoy the annual Fiesta Mayor celebration in honour of the Virgin of Covadonga. 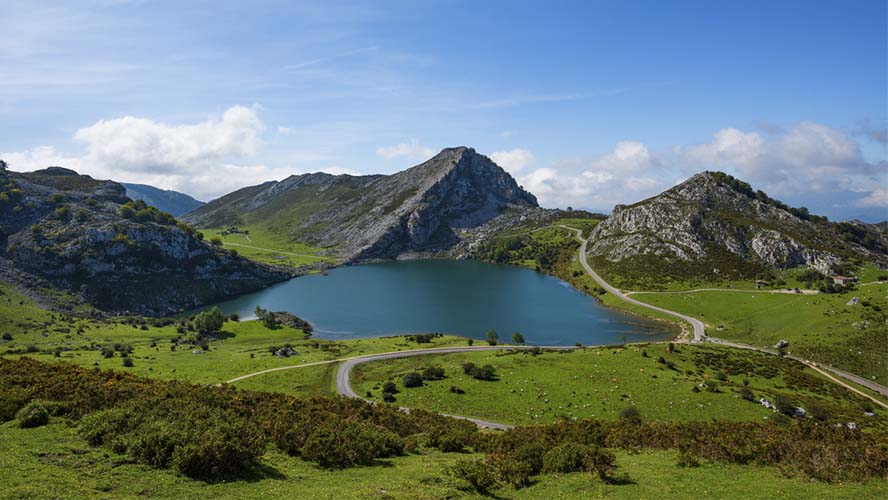 The Virgin of Covadonga: a long history

Covadonga supposedly already had a chapel in the Middle Ages, though worship of the ‘Virgin of the Battles’ did not become widespread until the victory of King Pelagius against the Muslims. A Benedictine monastery was raised first, with the church of Santa María in the cave. Felipe IV later founded a San Agustín collegiate church.

In October 1777 the church in the Santa Cueva was devoured in a fire. Some say it was caused by a bolt of lightning, while others blame the large candles lit by pilgrims. The fire destroyed the wooden chapel and the statue of La Santina, along with all her treasures and sacred adornments. 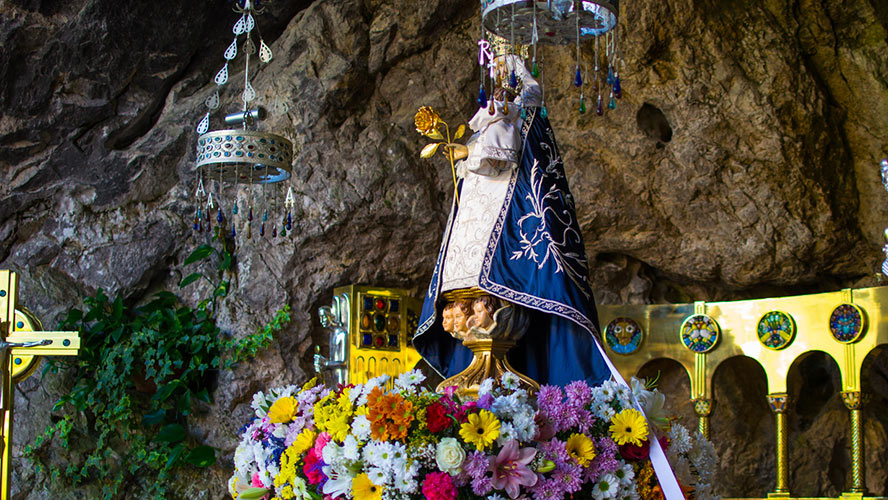 After news reached King Charles III of Spain, he ordered that a new monumental temple be raised. He sent his court architect, Ventura Rodríguez, to design a large national sanctuary.

Work on the new basilica took place between the late-19th and early-20th centuries. It bears a certain resemblance to Pena Palace in Sintra (Portugal) and to Neuschwanstein Castle in Bavaria (Germany). The image of the Virgin was crowned on 8 September 1918 by the archbishop of Toledo in the presence of King Alfonso XIII and Queen Victoria Eugenia.

Historical titbit: Between 1908 and 1933 a steam tram ran between Arriondas and Covadonga.

The exile of La Santina

The image of La Santina was stolen in 1939 and taken to Paris during the Spanish Civil War. History does not suggest that the statue was desecrated. She was instead held hostage with the hope of gaining a top military or political rank in return for her release. The exchange never happened, however. The polychrome wooden image was found by chance after the war by the Spanish ambassador in Paris, Pedro Abadal. Wasting no time, the ambassador reported his finding and crossed the Spanish border with the statue in his own car, ensuring she was returned safely to her rightful place in the chapel in the Santa Cueva.

Here are some other important dates in Covadonga’s history: in 1954, Cardinal Roncalli (the future Pope John XXIII) prayed by La Santina; Pope John Paul II did the same in 1989; Spain’s current king, Felipe IV, was proclaimed Prince of Asturias at the site in 1977. 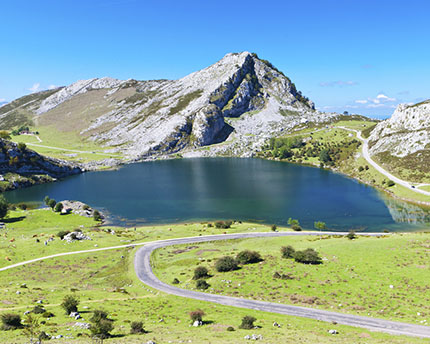 The Lakes of Covadonga: a glacial wonder