Saint John's Eve in Barcelona: the magic of the shortest night of the year 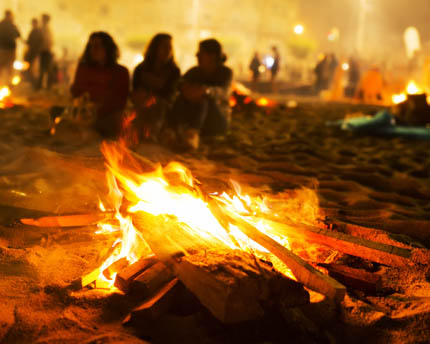 A Catalan proverb says that those who light a fire for Sant Joan [Saint John] will not be burnt all year and the tradition calls for jumping over a bonfire to attract good omens. These, as well as throwing negative energies into the bonfire, are the rites and legends that make up this magical night which is celebrated all throughout Barcelona, coinciding with the beginning of summer.

The Christian tradition celebrates the summer solstice two days later, to coincide with the birth of Saint John the Baptist. Originally though, it was a cult festival worshipping the sun, bonfires were lit so that its fire and the fireworks let off would give more strength to the sun and thus lengthen the days, since from 24 June, the days begin to shorten. The festival has characteristic elements such as the purifying fire, midnight swims and certain magical rituals to ward off evil spirits.

This party begins with the arrival of the Canigó flame to Plaça de Sant Jaume. It is welcomed by the city’s giants and eagle, representing Sant Joan, to the sound of Muntanyes del Canigó. The representatives of Barcelona’s neighbourhoods then spread the fire by lighting the Sant Joan bonfires throughout the city, on squares and beaches.

The flame is never extinguished, it remains lit throughout the year in the Castillet fortification in Perpignan until 22 June, when it is carried to the Canigó mountain summit, from where various organisations distribute it to light other Sant Joan bonfires throughout Catalonia. And in this way, the Nit del Foc [Night of Fire] begins.

A night of fire and dancing

Each Barcelona neighbourhood has its own unique way of celebrating Sant Joan festival with bonfires. It is a night of eating dinner out on the street together, letting off fireworks, and dancing to live music until dawn alongside typical devils and beasts from the traditional Catalan culture.

Old furniture used to be burned in large fires that, according to tradition, you must jump over an odd number of times so that that fire will protect you throughout the year.

One of the most traditional activities during the Nit del Foc is organised in Barceloneta where the neighbourhood’s colla [troupe] of devils performs a hellish tablada—a traditional dance representing the fall of the sun and moon.

The festive dinner always includes cava and coca de Sant Joan pastry in any of its variants, whether sweet with fruit, pine nuts or cabell d’àngel (caramelised squash) or savoury with pork cracklings. It is sometimes served with cream, making it very similar to roscón (a Christmas cake). According to traditional pastry chefs, it should be twice as wide as it is long and made with butter brioche dough and natural ferments, although pastry shops and bakeries often stock the cake made with puff-pastry.

Sant Joan bonfires on the beach

In addition to the traditional neighbourhood activities organised by the locals themselves, visitors can head to the beach with their picnic and cava to enjoy the fireworks and music from the beach bars, or dine at one of the many outdoor tables that restaurants and bars set up next to the beach.

It is a sight to behold: that night there are bonfires all along the beach, torches around groups of people who let off firecrackers and colourful fireworks galore, creating a happy and festive atmosphere. If you have decided to spend Saint John’s Eve with your friends on the beach, get there before the sun goes down as you won’t find any space to settle after that time.

Tradition endows water with healing properties on Saint John’s Eve, which is why people dive in at midnight. And this nocturnal swim tradition is still practised today, in some cases because the party atmosphere and the summer temperature motivates people to take part, other times people are simply superstitious, and enter backwards while looking at the moon and diving under 12 times to ensure their health for the whole year. If you want to favour your fertility, jump over nine waves backwards. And if you want the rituals to be effective, don’t look into a mirror all night after your swim.

This ritual requires that the participant write down a wish or a positive message for the future, but the versions of what to do with the note vary. Some believe they must leave it under their pillow with a June herb, and others burn it in the bonfire or with a candle. You can try one way, or all of them, just in case.

To make sure children didn’t run off and get lost, the Ànima de Cantiret and Gambutzí [scary imaginary creatures] were invented. But creatures with good intentions also appear on Saint John’s Eve, such as the Piropo who promotes love or the Dama Fortuna who gives good luck.

If you are lucky enough to be in Barcelona on Saint John’s Eve, we recommend you mingle and enjoy the party, just like a local. 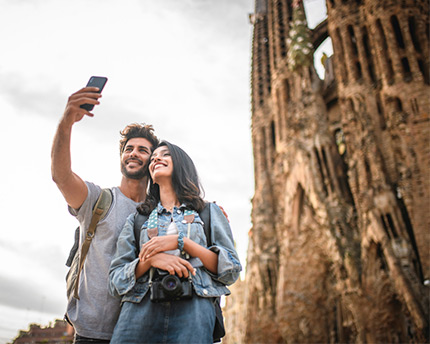 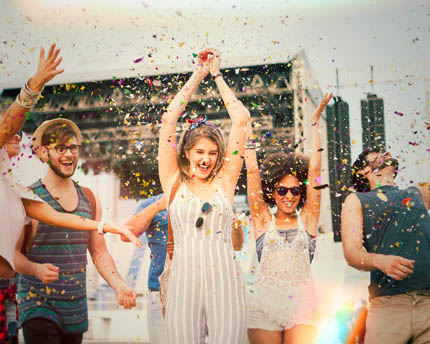