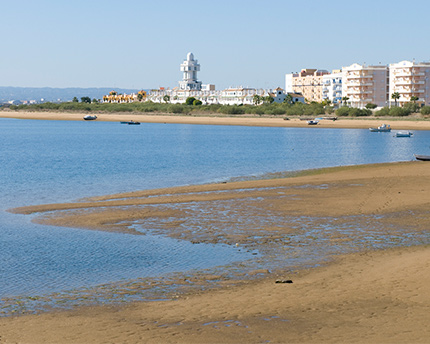 This small town in Huelva was born out of tragic circumstances. When the earthquake of 1755 destroyed much of Lisbon and the surrounding area, Isla Cristina was founded as a new fishing village with sturdier houses than had been previously built. As such, the new village of Isla Cristina was virtually unpopulated when it was founded and experienced enormous growth in the following decades. Today, its inhabitants reap the benefits of living between marshlands, pine forest and the sea.

With one of the prominent markets in Andalusia, more than 3000 hours of sun every year, a 20-kilometre coastline and surrounded as it is by the Marshlands of Isla Cristina, this small town has become one of the most prized places in Huelva.

What to do in Isla Cristina 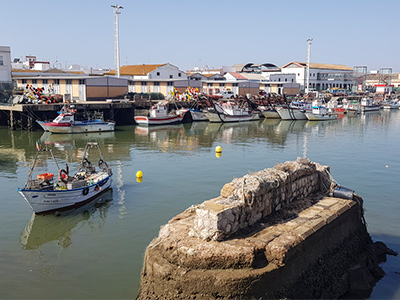 Fishing boats in the waters of Isla Cristina bring the best of the sea.

Isla Cristina has never lost track of its roots and so fresh fish continues to take centre stage there to this day. In fact, its port boasts the highest turnover in all of Andalusia and it even stands out among others on a national level. For that reason, it is highly recommendable that you attend (and take part, if you wish) a fish auction at the market. The market itself is open to the public and the fish auctions take place all day and sell all kinds of fish. Go for the fish or for the spectacle, either way it’s a great way to see and experience the port.

Naturally, the sea is central to life in Isla Cristina so there is no better way of experiencing it than taking a boat and setting sail. There are boat trips from the port that offer tours of the marshes, the River Carreras, mussel beds and even a tasting of the famous Isla Cristina prawns fresh from the source.

Along with that of Cadiz and Tenerife, Isla Cristina’s Carnival is one of the most famous festivals in Spain and has been since the beginning of the 19th century. Even if your holiday doesn’t coincide with the February festivities, you can see that the spirit of Carnival remains alive all year round at the Carnival Museum in the Patio de San Francisco, one of the oldest buildings in the city. Centuries old posters and costumes line the walls of this museum, showing just how important the festival is and has been to its inhabitants since the city’s foundation.

A stroll through the city centre 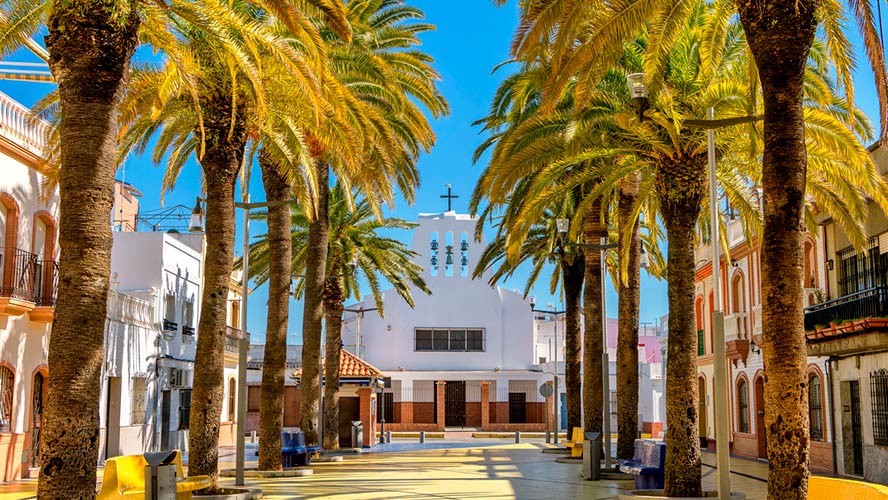 One of the most important streets of Isla Cristina, flanked by palm trees.

It’s a simple act but in a city as pretty as Isla Cristina it’s one that will stay with you long after you have left. The Iglesia de Nuestra Señora de los Dolores (Church of Our Lady of Sorrows) on Gran Via was built in the 1940s and today it contains some truly unmissable works art, from the sculpture of Our Lady of Solitude to Our Lady of the Rosary, patron saint of Isla Cristina. Along with the older, picturesque architecture the city also has an array of modernist buildings that stand out, such as the House of Gildita, which is also worth including on your walk.

Where to eat in Isla Cristina

Make the most of your walk through the city centre to discover the best restaurants and terraces in Isla Cristina where you can sample some of the best food Huelva has to offer, from cured ham to a staggering mix of fish and seafood cooked to perfection. Restaurants like El Mesón El Gato, Los Faroles, La Sal, El Pescador with its famous seafood casseroles and the tapas mecca Rincón de Galluo are just some of the places that will give you a sense of Isla Cristina cuisine and have you wanting to come back for more.

When the day is coming to the a close and sun begins to set, make the most of the romantic Sunset Route in Isla Cristina. Since the city faces south-east, the sun goes down between the land and the sea, a scene that has inspired countless poets in the past and will make for the perfect romantic end to a day with your partner. 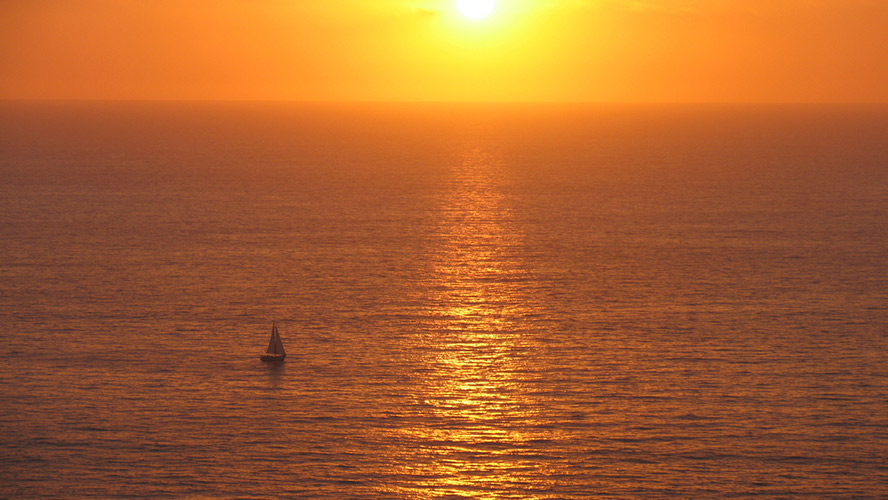 The Sun falls on the horizon of the seas of Isla Cristina.

The best beaches in Isla Cristina 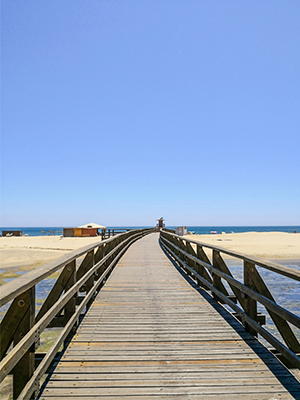 Walkway on a beach of Isla Cristina.

Local and international tourists alike flock to Isla Cristina every year because of the quality of its beaches. The crystal-clear waters are some of the most recommended beaches on the Costa de la Luz and between the sand dunes and pine forests there are beaches to suit all tastes.

Cantil Beach is located in located in the city centre and is perfect if you are travelling with children thanks to its family atmosphere and the fact that is on the River Carreras and therefore the waters are calmer than those of the sea. This quaint beach is perfectly picturesque, with its small fishing boats and the presence of the El Cantil lighthouse watching over the bathers. This old lighthouse has been converted into a residential building with magnificent views of the Marismas de Isla Cristina Natural Park.

The marshes of Isla Cristina were declared a ‘Natural Park’ in 1989 and are still one of its most famous attractions. Extending over 2145 hectares between Isla Cristina and Ayamonte, these marshes attract thousands of visitors worldwide to see the impressive flora and fauna. 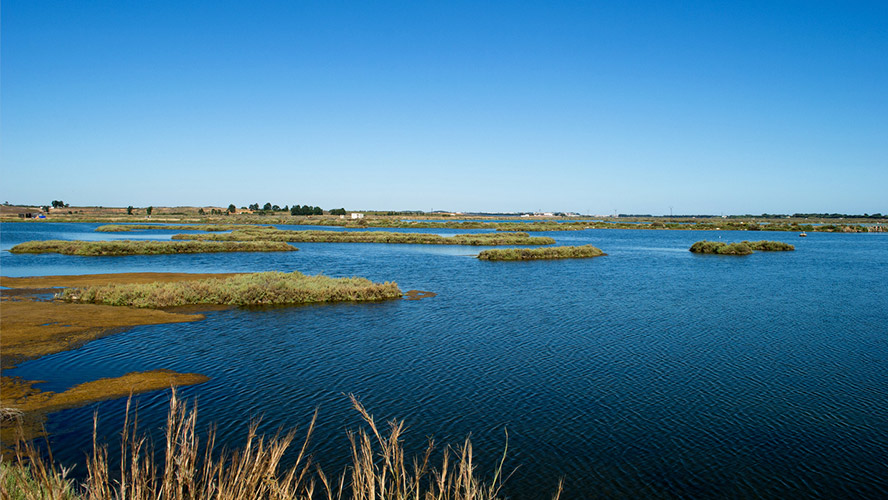 Isla Cristina is a microhabitat, its marshes attest.

The marshes are flooded each time the tide comes in and this is what makes them so attractive to wildlife like sea birds, reptiles, amphibians, fish and otters. The flatness of the marshes allows for fantastic panoramic views especially during sunset.

There are three well signposted walking routes through the marshes. The first is called the Laguna del Prado, accessible from the city centre and it is around 2 kilometres long. The second is the Molino Marea de Pozo del Camino, which is only around a kilometre in length but does bring you to an 18th century watermill that is activated every time the tide comes in, as well as an interpretation centre. Finally, there is the Salinas del Duque, which you can access from Punta del Moral and will take you on a 7-kilometre journey that will give you the best chance of seeing the wonderful sea birds that make the marshes their home. You really can’t leave Isla Cristina without taking in all of its natural beauty.

What to see around Isla Cristina

If you are thinking of making an itinerary for the province of Huelva, after visiting Isla Cristina there are many other nearby towns that are worth a visit, too. 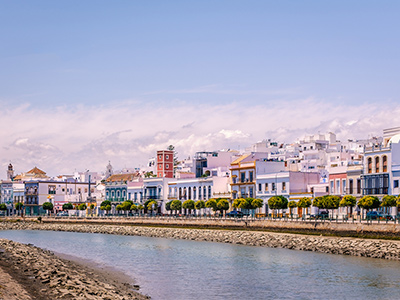 Picturesque houses in the town of Ayamonte, Huelva.

Ayamonte is certainly one of the most interesting places in Isla Cristina’s environs. Just 20 minutes away by car, at the mouth of the River Guadiana, this municipality is known for its natural beauty and its historical centre. Make your way to the Mudéjar Iglesia del Salvador (Church of Our Saviour), built during the 15th century atop the previously built mosque. Here you will also find the Villa well and the Marquis de Ayamonte palace. Right next to the river is one of the most famous sites in this town, the International Bridge of Guadiana, which is 660 metres long and built out of reinforced concrete and steel.

If you still have a hankering to hit the beach, though, you can’t go wrong with a visit to Isla Canela, just half an hour by car from Isla Cristina. It also belongs to the municipality of Ayamante and its beach, surrounded by sand dunes, is one of the best on the Costa de la Luz. Sunset over its crystal-clear waters is truly a sight to behold. Also, if you’re a golfer, here you will find a fantastic course dotted with lagoons.

Where to stay in Isla Cristina

For those looking to stay in Isla Cristina itself, the Hotel Barceló Occidental Isla Cristina is a safe bet. Perfectly placed on the sea front, the hotel has spectacular views and offers its guests the chance to stay in rooms or even full apartments, if more space is needed. There is also an all-inclusive option, which gives access to all of its bars, pools, terrace and buffet restaurant, not to mention its full gym if you feel you’ve overdone it at the buffet. Nearby there are also paddle tennis clubs and golf courses, and the hotel itself is full of activities for kids. If you are travelling as a family, this is definitely the place to stay. 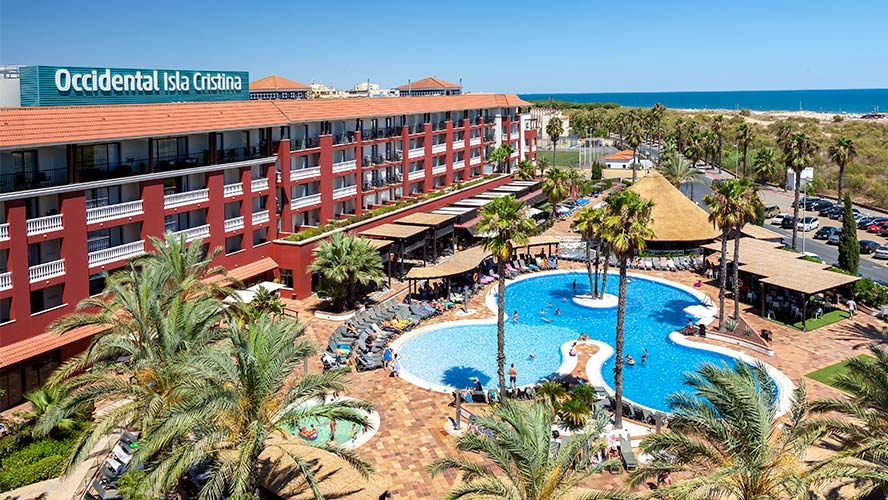 How to get to Isla Cristina 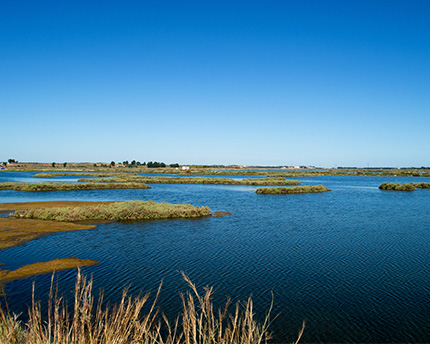