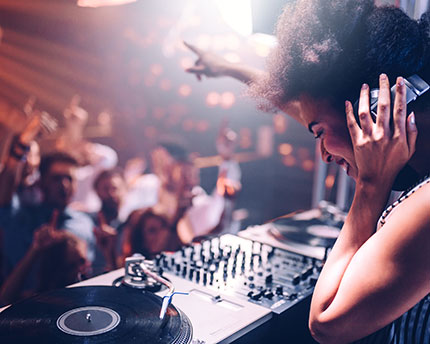 Nights in Madrid have a kind of wild happiness about them. They’re all about utter freedom, a bohemian spirit, and Madrilenian bravado… Joaquín Sabina, a true expert on the art of staying out all night long, immortalised his love for the magic of this city by night in the form of song in Yo Me Bajo en Atocha. In Madrid, you can go out on a Monday night, no problem at all. And a Tuesday night. And a Wednesday too. Whilst you’re laughing and chatting, drinking and dancing, the time will slip away from you… Everyone has a favourite spot to while away the hours but, in Madrid, the night never ends until dawn. From Huertas to Malasaña, from Lavapiés to La Latina, from pricey cocktails in Salamanca to infamous pubs in Sol. There’s a bit of everything, for everyone, at any time. Even the scientists agree: in 2017, a study revealed that the Spanish capital was the best city in the world to go out on the town. Here’s a practical guide to what you’ll find on a Madrilenian night out.

A toast to Cervantes and Quevedo on Calle Huertas

Right in the middle of Barrio de las Letras, where famous literary figures from the Golden Age like Cervantes, Lope de Vega, Quevedo and Góngora all lived and drank, Calle Huertas has inherited the lively atmosphere of the taverns and inns of old. Both this pedestrian street and the ones adjacent to it, like Plaza de Santa Ana, offer a variety of options playing all kinds of different styles of music, from the retro music of Sunset 80s to the flamenco of Tablao Cardamomo, and the jazz of Café Central or La Fídula. There are also all kinds of spots to have a drink to the tune of more commercial or Latin music, like Mi Madre Era Una Groupie, TBC, Xaloc or La Lupe. This area is a real hit with foreign students. After a few drinks, ending up singing a few classics in Cheers Karaoke could be a great way of rounding off the night.

Malasaña, flashback to the Madrilenian ‘Movida’ of the 80s

The ‘Movida’ madrileña, the countercultural movement of Spanish youth in the 1980s, was born on the streets of Malasaña. The bars were the backdrop to legendary parties starring the artists that rose to fame during the period, like Antonio Vega, Enrique Urquijo and Alaska, to name just a few. A few rock bars have survived from that time, like Tupperware, La Vía Láctea and El Penta, famous for its appearance in the lyrics of La Chica de Ayer, by Antonio Vega. Today, the area is still the beating heart of everything modern and trendy, now dominated by the hipster scene, with bars dotted around playing indie, pop, electronic music and rock. Every weekend the zone fills up with young people who kick the night off with a gin and tonic at one of the many bars or watching a concert at one of a few famous venues, like Sala El Barco or Café La Palma. It’s also very on trend to go for a few beers at a classic pub like Bodegas La Ardosa or Casa Camacho (you’ve got to try a yayo).  If you’re looking for your best options for dancing until dawn, we recommend the Ocho y Medio Club, Taboó and the Wurlitzer Ballroom​.

Internationally famous for the LGBTI Pride Festival held every year at the beginning of July, the party in the Madrilenian neighbourhood of Chueca continues all year round. For a few decades now, since the LGBTI community first breathed life into its squares and streets, Chueca has been one of the liveliest areas to head to for a fun night out enjoying a tolerant atmosphere, where no one judges anyone. Whatever floats your boat sexually speaking, you’re welcome at all the bars in the area, whether they’re ‘gay bars’ or not. A few that stand out include historic clubs like Libertad 8 or Black & White, a place that’s been a pioneer of the LGBTI movement for 30 years now. The zone stands out for the variety of bars for different sexual orientations, with some popular with lesbians, like Truco or Fulanita de Tal, and others specialising in ‘bear’ culture, like Enfrente or Zarpa. If you want to enjoy an incredible drag queen show, head to LL Showbar. Lastly, we couldn’t leave out a total classic, Tony 2, a hilarious piano bar where you’ll end the night singing your heart out alongside complete strangers.

Latineo: the action of heading to La Latina for a few beers or tapas. This word, so colloquial and authentic, has had to be invented to sum up what thousands of Madrilenians do every single weekend, especially on Sundays. In the neighbourhood of La Latina, whether in Cava Alta y Baja or Plaza de la Cebada, you’ll find dozens of bars with terraces and delicious tapas. The fried eggs at Casa Lucio, the tortilla at Pez Tortilla-La Latina, Café Angél’s stuffed avocados… The list is a long one. This is a great way of passing the time as day turns to night, but the fun doesn’t have to stop there. People who want to make a night of it can pop along to a show at the Berlín Cabaret, listen to live music at Contraclub or El Rincón del Arte Nuevo, enjoy a prestigious flamenco show at El Corral de la Morería, or go for a dance at Shoko Madrid or Marula.

Madrid’s most authentic, multicultural neighbourhood, where life-long residents who were born decades ago rub shoulders with people of more than 80 different nationalities, promises a special kind of night. Here, you’ll probably end up hopping from bar to bar and striking up a conversation with friendly strangers. After having dinner in one of the most exotic restaurants in the area (optional, but highly recommended), why not start the night at Candela flamenco? This small stage has welcomed legends like Camarón and Paco de Lucía. Then, for a drastic change of atmosphere, dive into the pop-filled El Juglar, head to La Huelga for an indie alternative, or head to the Travelling Bar for rockabilly. If you prefer something a bit more authentic and Madrilenian, Bodegas Máximo or bar San Lorenzo will take you back in time. Around about 3:00 AM you’ll have a hard decision on your hands: go home or push on till dawn in Club 33, a popular club where it’s not uncommon to spot a famous journalist or actor. That’s just a small selection of Lavapiés’ bars. After all, as our friend Sabina put it, just one of this area’s squares, Antón Martín, boasts more bars than the whole of Norway.

An elegant evening in the neighbourhood of Salamanca

If you’re more one for sophistication and elegance, or you don’t mind paying a bit more for a drink, then Madrid’s Golden Mile isn’t only home to luxury shops but also gastrobars, wine bars, lounge terraces and clubs. The gastronomic equivalent to a shopping centre, Platea, is the largest of its kind in Europe, with 6,000 square metres of bars and restaurants. It’s a great way of getting the night started. Another restaurant in the area, Amazónico, offers you the chance to move straight from dinner to enjoying jazz, blues, soul and funk in its own club, The Jungle Club. But when the time has come to get those feet moving, you can’t go wrong with clubs like Gabana, La Posada de las Ánimas o Serrano 41, clubs with pedigree that frequently attract members of the jet set and television stars.

Taverns and clubs in the centre of Madrid

In the area around Puerta del Sol, you’ll find a few of Madrid’s most iconic, international clubs. These are the ones that most often attract foreign tourists. That’s the case with Joy Eslava, an old theatre that’s been open for 150 years which was reinvented to become one of Madrid’s signature nights out. Another famous spot is the Sala El Sol, famous for concerts given by both national and international artists. In the area, you’ll also find fun places like Moondance and Charada and, a little further away, next to Atocha, is Kapital, probably Madrid’s most famous club, with seven floors and different themes.