Valencia’s Palau de la Música: a modern auditorium on the old riverbed of the Túria 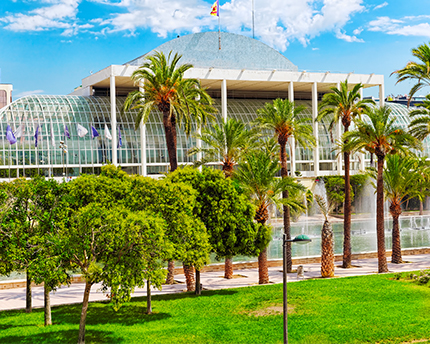 Valencia’s Palau de la Música astonishes those strolling through the Jardí del Túria Gardens with its monumental glass foyer, which, to a certain degree, resembles a large greenhouse, both architecturally and for the evident connection between the building and its natural environment. It may even conjure up, among architecture buffs, images of the Crystal Palace, which once stood in Hyde Park, designed by Joseph Paxton for the Great Exhibition of 1851. Nevertheless, beyond mere aesthetics, what lies behind this transparent vestibule is a modern auditorium, which musicians of such calibre as Plácido Domingo maintain has excellent acoustics. Read on to get a feel for one of the most essential places in the cultural life of Valencia.

The building of Valencia’s Palau de la Música was opened on 25 April 1987 and designed by José María García de Paredes—awarded the National Architecture Prize in 1956 and a professional especially known for his concert halls across Spain, among them the Manuel de Falla Auditorium (Granada), the National Auditorium of Music (Madrid) and the Víctor Villegas Auditorium and Congress Centre (Murcia). With such a CV it’s not a surprise that the great Spanish tenor Plácido Domingo stated, in reference to its acoustics, that the Palau de la Música de Valencia ‘is a Stradivarius.’

One of the most interesting characteristics of the auditorium by García de Paredes is that it maintains a special dialogue with its natural environment, the result of the renovation carried out by Ricardo Bofill on sections 10 and 11 of the Jardí del Túria gardens. Said gardens are a genuine oasis for local people, spanning seven kilometres of length from the Ciutat de les Arts i les Ciències [City of Arts and Sciences] to the Bioparc—Valencia’s former zoo. In fact, this incredible urban park came about thanks to pressure from citizens placed on authorities so that the land that was freed up after the course of the Túria river was diverted—due to the tragic floods of 1957—could be used for such purposes and not for a large road as the local and national authorities intended.

The vestibule of the Palau is the finest example of this dialogue between architecture and nature. Beyond the visual connection with the surrounding vegetation, the hall itself boasts orange trees bathed in the vivid sunlight that shines through the transparent roof. It is precisely for this reason that the space is known as the Hall of Orange Trees.

The extensive glass foyer leads onto the main rooms of the Palau de la Música, among which is the José Iturbi Hall, a space designed to host symphonic concerts furnished with 1,781 seats. Spectators literally surround the musicians, as, in addition to the main stalls, it boasts lateral galleries and rows of seats behind the orchestra—with the exception of the conductor, of course.

The Joaquín Rodrigo Hall has 420 seats and is mainly used for chamber-music concerts and opera recitals. The Palau also hosts congresses, conferences, poetry readings and all manner of events, for which its secondary rooms are also used, such as the Lucrecia Bori Hall, the Martín y Soler Hall and the Exhibition Hall.

Finally, due to the expansion undertaken in 2002 by Eduardo de Miguel, the building also has an underground annex used for courses, rehearsals and administrative tasks, in addition to the institution’s archives and a documentary centre that holds over 7,000 old scores.

The Palau’s programme is mainly centred on classical music, especially concerts by the Orchestra of Valencia, as it is the city’s main musical group, and the Palau is its headquarters. The cycles organised by the Municipal Band are also of great interest for locals, especially those that take place in the Palau’s gardens in June.

Having said that, the auditorium is not limited exclusively to classical music. In fact, you will also find jazz, singer-songwriters and flamenco in its programme, in addition to specific activities for children. The institution itself defines the Palau as a space for ‘enjoying, learning, playing, being inspired, searching, discovering and moving to the sound of music.’

If you are passionate about music and you would like to make the most of tour trip to Valencia to visit the Palau, all you have to do is check the programme and buy your tickets online, over the telephone or in-person at the ticket office, which is open from Tuesday to Sunday, form 10:00 AM to 2:00 PM and from 5:00 PM to 9:30 PM.

Whatever your musical taste, you will no doubt have a great time at an auditorium renowned for its amazing acoustics. At the end of the performance, you can head to the beach, go for a stroll, or have a drink at one of the many bars in the city centre, rounding off a magical night in Valencia.