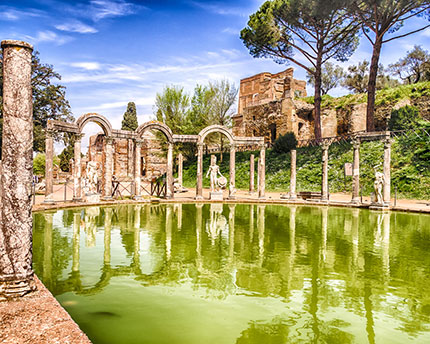 Some 20 kilometres from Rome, you will find the city of Tivoli, the location chosen by the Emperor Hadrian for his country retreat. Unhappy with his villa on the Palatine Hill , the emperor was the first to establish his home outside the city. Although he sought to move far away from the hubbub of Rome, he remained close to civilisation — all four of the city’s aqueducts converged at Tivoli, it was well connected by river, and it was famous for its Travertine marble, used in the construction of both the Colosseum and the Vatican.

The ambitious project consisted of a network of palaces, fountains, thermal baths, theatres, temples, libraries and gardens, which covered an area of 120 hectares (only forty can currently be visited). More than a villa, it was a small town made up of 30 buildings, all of them connected underground by a labyrinth of passages and galleries. This ensured the emperor and his guests did not have any unnecessary encounters with servants and animals.

After 20 years of construction work, the villa emerged as a true architectural masterpiece. It was striking not only for its size, but also because it employed a mixture of exciting new styles that were unfamiliar to Romans at the time. As a lover of Greek culture, and of the voyages and travels of Homer, Hadrian (known as The Restless Emperor), wanted to represent the many different cultures he had come across on his travels through the empire, including those of North Africa and the Middle East.

The Canopus: a party venue

Although the villa incorporated many different styles, Greek and Egyptian architecture still predominated in Hadrian’s Villa. Maybe one of the most striking and best preserved areas of the complex is the Canopus. This is the name of the recreational space immitating a canal, with Corinthian columns, sileni (satyrs and loyal companions of Dionysus) and caryatids (Greek colums with a female form) on both sides of the elegant passage. At the end, there is a large exedra, the function of which is still a mystery. It is thought that water fell into it from a height, creating a thin curtain that separated the emperor from the rest of the guests, as was typical of eastern rulers.

Hadrian took his inspration from Canopus, the port city of ancient Egypt linked to Alexandria by a canal. It is in this place that night-time parties and meetings were held, and where sumptuous summer banquets took place. It is also believed that certain elements were added at a later date to create a space dedicated to the memory of Antinous, a young teenage slave who had been the emperor’s favourite lover. After the death of the boy in strange circumstances, Hadrian insisted on honouring his memory by obliging everybody to venerate him like a god, dedicating a constellation to him, naming a city after him and minting coins with his likeness on them. 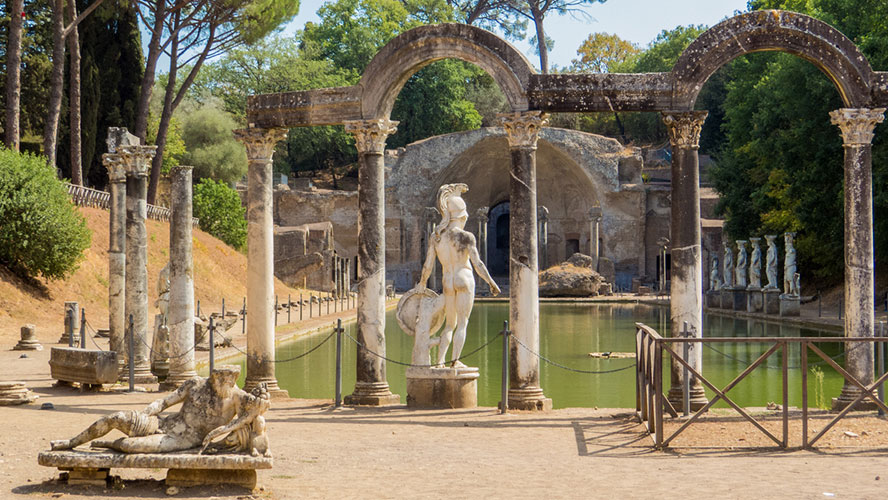 The Pecile, a philosopher’s walkway

Located inside the villa, this was where the emperor would go for his walks. At that time, doctors recommended taking walks of at least two Roman miles, which would be the equivalent of around 3 kilometres, or 7 times round the Pecile. Protected from the outside by a wall, it had a portico that provided shelter against the elements. In the centre, in the open air, there was a garden area with a swimming pool. It was similar to the Stoa Poikile of ancient Athens, a politial and cultural centre of the time, where the Stoics used to walk (philosophers of Zeno’s school). 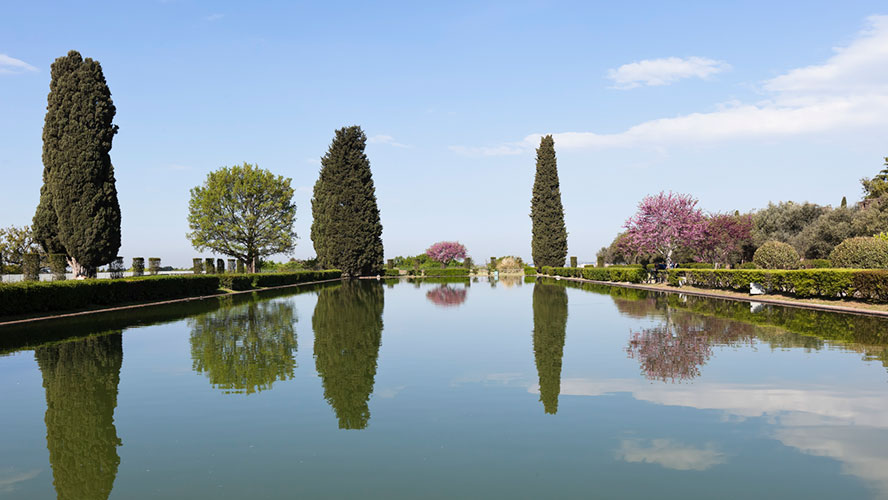 The Maritime Theatre: a palace within a palace

This building, maybe the oldest and most isolated of the complex, is located on a small circular island of 45 metres in diameter that is surrounded by a canal and connected to the mainland by two wooden drawbridges. It boasted all the possible luxuries for a retreat within the villa itself: bedrooms, thermal baths, dressing rooms, a library, latrines and beautiful gardens. The single-storey space was surrounded by a portico with ionic columns, and is where the emperor used to meditate and, according to some, write his memoirs. Although it is also believed that the Maritime Theatre was the love nest where Hadrian spent most of his time with his lover Antinous. After Antinous’ death, Hadrian built a mausoleum in his honour — the Antinoeion.

At the north end of the villa, there is an ample atrium (a patio surrounded by columns) designated for public functions. In the centre, there is a rectangular fountain; in the south, an octogonal building with a dome supported by eight columns at the corners; and in the east and west, two long underground galleries that lead to the main building. Lastly, in the north, there were servants’ quarters, the mosaics of which are still preserved on the ground. 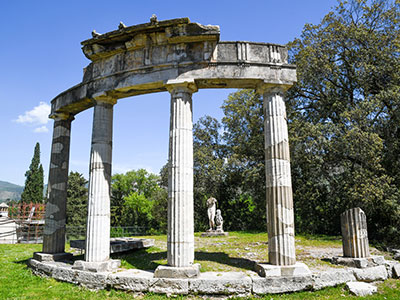 The Temple of Venus

The Temple of Venus

A little way from the heart of the villa, surrounded by trees, you will find the Temple of Venus. The temple is a tholos (a circular construction of Ancient Greece) with Doric columns, and the sculpture of the Aphrodite of Knidos was located in the centre. Other statues were also found, including those of Apollo and Discobolus, but they are now on display in different museums.

When the archaeologists found the ruins, the Temple of Venus was just a field of rubble. A century later, after a faithful and exhaustive reconstruction, it was found to be a semi-circular tholos and recovered some of its magic.

As well as the passage of time and the abandonment of the villa, other factors had an impact on its preservation. While the ruins drew the interest of archaeologists and lovers of architecture, they also attracted the attention of more unsavoury characters looking to plunder some of the treasures. This included Cardinal Ippolito d’Este, who built his nearby Villa de Este by ‘borrowing’ the Emperor’s marble and sculptures.

Hadrian’s Villa is still largely an unsolved mystery, with hundreds of hectares and ruins that remain unexcavated. As well as underground tunnels and passages, it is highly likely the emperor had many other secrets we may never discover. 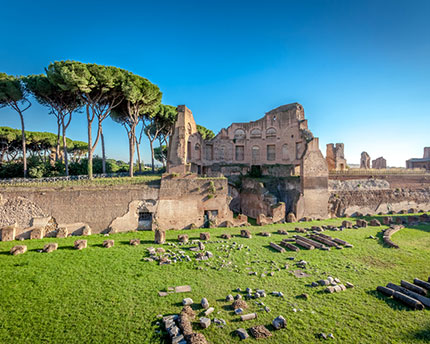 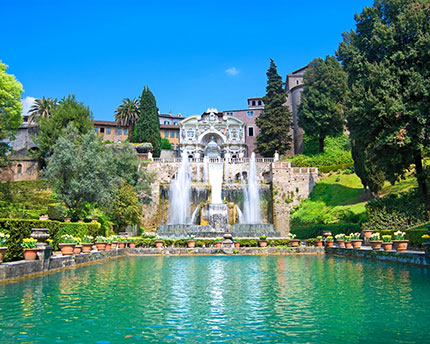 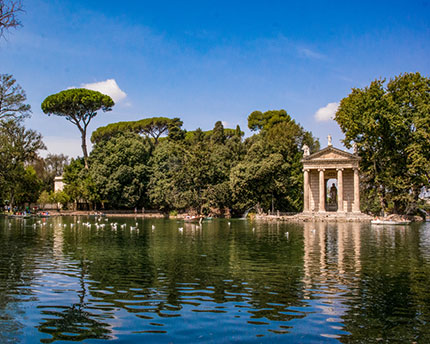 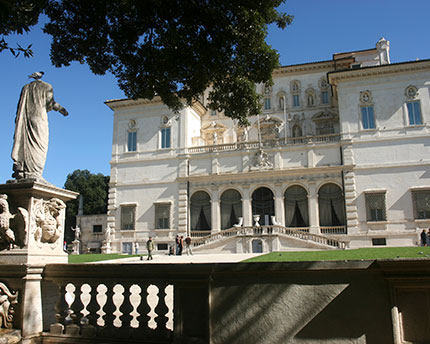 ‘Galleria Borghese’: a museum in an intimate setting